U.S. and S. Korea push ahead with war drills 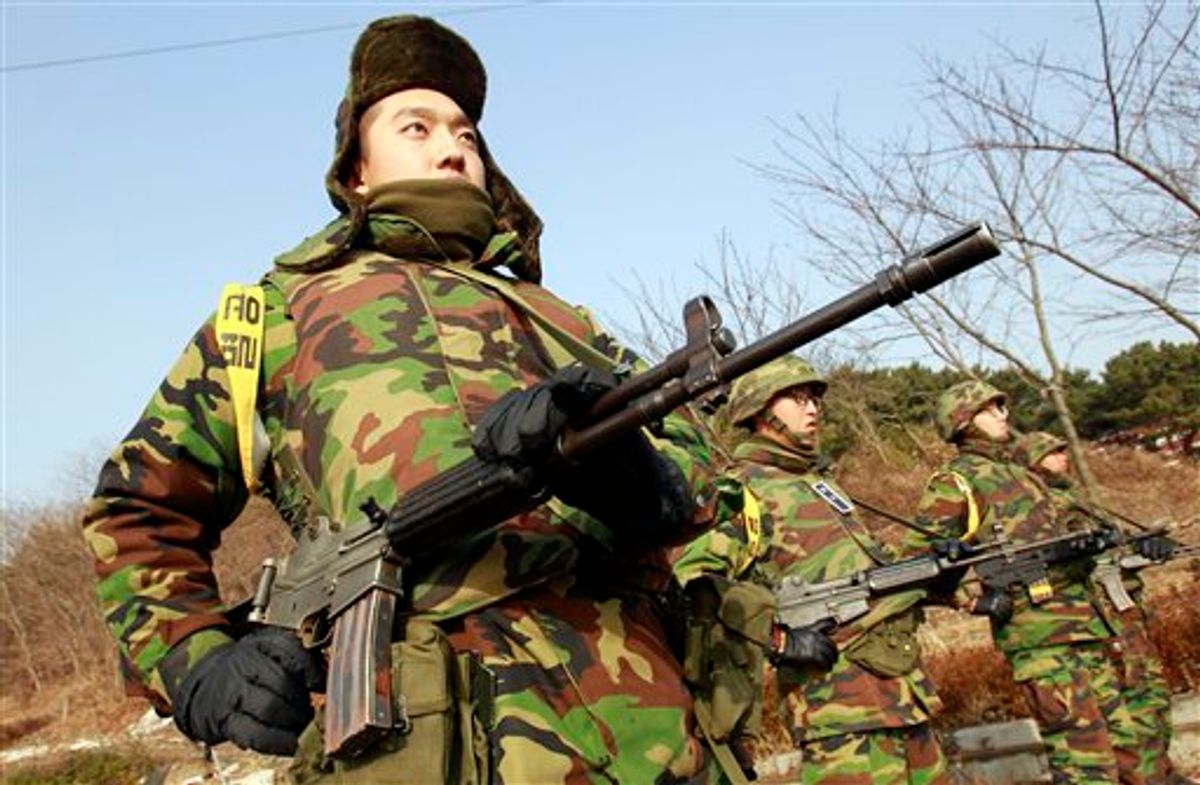 South Korean marines stand guard near the their military base on the Yeonpyeong Island, South Korea, Saturday, Nov. 27, 2010. Tensions have soared between the Koreas since the North's strike Tuesday destroyed large parts of Yeonpyeong in a major escalation of their sporadic skirmishes along the disputed sea border. (AP Photo/Lee Jin-man) (AP)
--

The United States and South Korea prepared for war games Sunday as South Koreans demanded vengeance over a deadly North Korean artillery bombardment that has raised fears of more clashes between the bitter rivals.

The North, meanwhile, worked to justify one of the worst attacks on South Korean territory since the 1950-53 Korean War. Four South Koreans, including two civilians, died after the North rained artillery on the small Yellow Sea island of Yeonpyeong, which is home to both fishing communities and military bases.

North Korea said civilians were used as a "human shield" around artillery positions and lashed out at what it called a "propaganda campaign" against Pyongyang.

It claimed the United States orchestrated last Tuesday's clash so that it could stage joint naval exercises in the Yellow Sea with the South that include a U.S. nuclear powered supercarrier -- enraging the North and making neighboring China uneasy.

The North Korean attack on an area with a civilian population marked a new level of hostility along the rivals' disputed sea border. Only eight months ago, according to the findings of a South Korean-led international investigation, a North Korean torpedo sank a South Korean warship in waters farther west, killing 46 sailors.

The aggression could be linked to the North's attempt to strengthen its government as it pursues a delicate transfer of power from leader Kim Jong Il to a young, unproven son. It also may reflect Pyongyang's frustration that it has been unable to force a resumption of stalled international talks on receiving aid in return for nuclear disarmament.

The attack laid bare weaknesses 60 years after the Korean War in South Korea's defenses against the North, which does not recognize the border drawn by the U.N. at the close of the conflict and which considers waters around Yeonpyeong as its territory.

The skirmish prompted President Lee Myung-bak to replace his defense minister on Friday.

At a funeral Saturday near Seoul, South Korea's marine commander, Maj. Gen. You Nak-jun, vowed a "thousand-fold" retaliation for the attack. Dignitaries and relatives laid white flowers at an altar for the two marines killed in the North's attack. The mother of one of the victims fell forward in her chair in grief.

"Once the enemy attacks us, it is our duty to respond even more strongly," said student Jeon Hyun-soo, 19. "The South Korean people want this."

Elsewhere in Seoul, about 70 former special forces troops protested what they called the government's weak response and scuffled with riot police in front of the Defense Ministry, pummeling the riot troops' helmets with wooden stakes and spraying fire extinguishers.

North Korea's state news agency said that although "it is very regrettable, if it is true, that civilian casualties occurred on Yeonpyeong island, its responsibility lies in enemies' inhumane action of creating a 'human shield' by deploying civilians around artillery positions."

The North said its enemies are "now working hard to dramatize 'civilian casualties' as part of its propaganda campaign."

South Korea was conducting artillery drills Tuesday from the island, located just 7 miles (11 kilometers) from North Korea's mainland, but fired away from the mainland.

The North said it warned South Korea to halt the drills on the morning of the attack, as part of "superhuman efforts to prevent the clash to the last moment."

The North said that Sunday's planned U.S.-South Korean war games showed that the United States was "the arch criminal who deliberately planned the incident and wire-pulled it behind the scene."

The war games starting Sunday and involving the USS George Washington supercarrier display resolve by Korean War allies Washington and Seoul to respond strongly to any future North Korean aggression. However, Washington has insisted the drills are routine and were planned well before last Tuesday's attack.

North Korea on Saturday warned of retaliatory attacks creating a "sea of fire" if its territory is violated.

President Lee told top officials "there is a possibility North Korea may take provocative actions during the (joint) exercise," and urged them to coordinate with U.S. forces to counter any such move, according to a spokesman in the president's office who spoke on condition of anonymity, citing official protocol.

Washington and Seoul have pressed China to use its influence on Pyongyang to ease tensions. A dispatch from Chinese state media on Friday -- saying Beijing's foreign minister had met with the North Korean ambassador -- appeared to be an effort to trumpet China's role as a responsible actor and placate the U.S. and the South.

China is impoverished North Korea's biggest benefactor and its only major ally.

On Friday, the North conducted an apparent artillery drill within sight of Yeonpyeong island. The warning to Seoul and Washington came as the top U.S. commander in South Korea toured Yeonpyeong island to survey the wreckage from the rain of artillery three days earlier.

President Lee has ordered reinforcements for the 4,000 troops on Yeonpyeong and four other Yellow Sea islands, as well as top-level weaponry and upgraded rules of engagement.

Most of the islanders fled to the mainland after the barrage set off fierce blazes that destroyed many of their communities. It will take six months to two years for island communities to rebuild, disaster relief official Kim Sang-ryul said.

Soldiers assembled toilets Saturday for temporary shelters being built on the island by teams of relief workers.

"Military-wise, the emergency facilities should have been prepared for something like this, so I think the South Korean military must reinforce them," said Kim Min-yang, a 27-year-old company employee. "I also think we need more dialogue with North Korea."