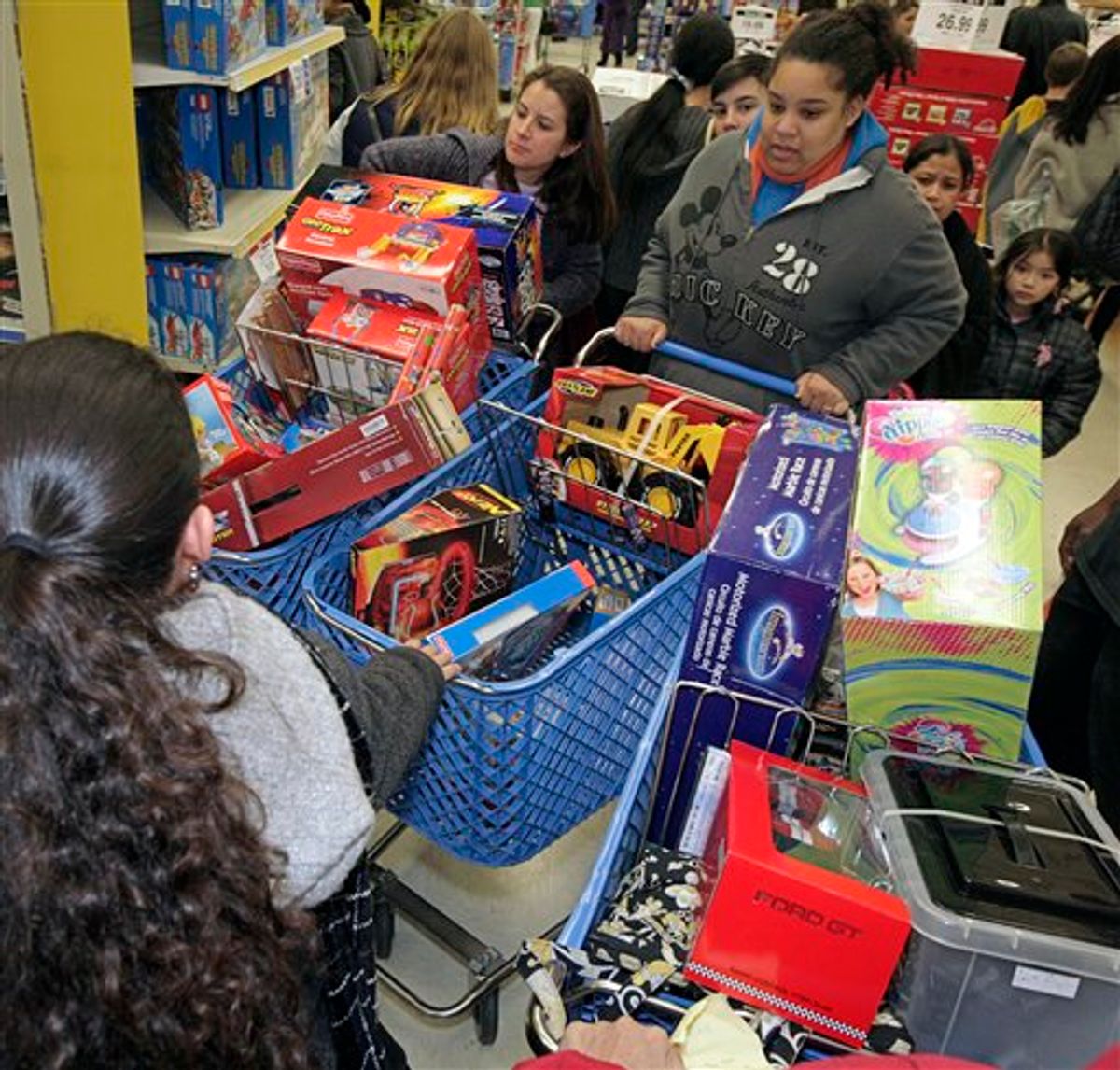 A traffic jam is negotiated in the aisles of Toys R Us, in San Rafael Calif., Thursday Nov. 25, 2010 which was crowed with Black Friday shoppers. (AP Photo/Mike Adaskaveg) (AP)
--

For one day at least, you could almost imagine the recession never happened. Millions of the nation's shoppers braved rain and cold to crowd stores while others grabbed online bargains on what could be the busiest Black Friday ever.

Early signs pointed to bigger crowds at many stores including Best Buy, Sears, Macy's and Toys R Us, some of which had earlier openings than past years or even round-the-clock hours. Minnesota's Mall of America and mall operators Taubman Centers Inc. and Macerich Co. also reported more customers than last year.

But the most encouraging sign for retailing and for the economy was what Americans were throwing in their carts. Shoppers still clutched lists and the buying frenzy was focused on the deals on TVs and toys, but many were treating themselves while they bought gifts for others, adding items like boots, sumptuous sweaters, jewelry and even dresses for special occasions.

Elayne Breton and her daughter Michelle got to Maryland's Mall in Columbia around 7 a.m. A few hours later, Michelle had picked out several presents for herself, including a pair of UGG boots, perfume and an iPod Touch. At Nordstrom, she scored a long-sleeved purple shirt that her mother let her wear out of the store.

"Last year we were careful," said Elayne, whose husband's beer distribution business has started to pick up again. "This year we'll do more."

The strong Black Friday builds on retailers' momentum after a solid start to November. Shoppers who can afford it are buying more nonessentials, like jewelry and luxury goods.

"Last year, consumers were extremely into the basics, the socks, the pillows," said Keith Jelinek, director of the global retail practice at consulting firm AlixPartners. "This year, they're hungry to dress up their wardrobes, their homes. Shoppers were buying items with a little more pizazz, trendier sweaters, sheets in higher thread counts."

He cautioned that they're not looking to replace everything -- just looking for a few special items. "They're still very value-conscious," he added.

Macy's CEO Terry Lundgren said there were 7,000 people outside its Manhattan flagship store for its 4 a.m. opening, up from 5,000 people a year ago.

"The difference between this year and last year was that last year, people had a budget and a list. They're doing the same thing this year but they're also buying for themselves," he said. Among some of the hot sellers were a luggage set for $49.99 and $39.99 cashmere sweaters.

He noted that two groups that helped fuel customer traffic were young shoppers, ages 15 to 25, and men, both of whom were buying for themselves.

Sharply reduced prices on flat-screen TVs helped fuel many stores' sales, according to Marshal Cohen, market research analyst at NPD Group Inc. Stores were grappling with a glut of TVs heading into the season because they had overestimated consumer demand.

Research firm ShopperTrak is expected to release Black Friday data on Saturday, but a full picture of how retailers fared for the overall weekend won't be known until Thursday when major retailers report their monthly sales results.

For the economy, the question remains: Will shoppers keep it up?

Nearly 15 million people remain unemployed, and concerns about job security cloud consumer confidence. Spending is picking up but has not returned to pre-recession levels. And shoppers haven't let go of many cautious habits learned from the Great Recession.

Many purchased with cash, and layaway remained popular as shoppers try to budget. Sears reported that consumers were setting aside items like Nordic treadmills that were on sale for $399, a savings of $400, to be delivered after the holidays.

Credit cards were staying inside many wallets.

"Now that I'm debt-free, I want to keep it that way," said Desiree Banks, who was at Best Buy in Macedonia, Ohio, with a stack of DVDS for $3.99 each.

Shoppers did their homework, researching deals on websites. Stores made planning easier by touting their bargains last week.

"Every year, we get more refined," said Deb Brown, 42, who was at the Bellevue Square Mall in Bellevue, Wash. She came from White Rock, British Columbia.

A big worry is that some of the solid buying earlier in November could steal thunder from the rest of the season and leave a deeper lull between Thanksgiving weekend and the few days before Christmas.

Clearly, stores worked hard to draw shoppers in for Black Friday and earlier, with more deals and expanded hours that allowed people to get shopping soon after their Thanksgiving dinner.

A number of stores including Old Navy, Toys R Us and Sears opened on Thanksgiving Day. Toys R Us was counting on getting an extra boost by opening 24 hours straight, starting at 10 p.m. on Thanksgiving. Many stores had trotted out the "Black Friday" label on sales as far back as October.

"Traffic was fast and furious. ... We started earlier and we have more TV (commercials). I think both of these things helped," Dunn said in an interview with The Associated Press.

Thanksgiving weekend is huge for retailers. In recent years, Black Friday -- called that because the surge of shoppers could take retailers into profitability, or "the black," for the year -- has been the busiest shopping day of the year, according to data from ShopperTrak.

Black Friday is generally not as big for online retailers as Monday after Thanksgiving -- known as Cyber Monday -- but many were already off to a good start. By mid-afternoon Friday, eBags sales soared 69.5 percent compared with a year ago.

The retail blitz doesn't make or break the holiday season. In fact, shoppers seem to be procrastinating more every year, giving retailers some nail-biting moments waiting for sales the last few days before Christmas.

Last year, the Thanksgiving shopping weekend accounted for 12.3 percent of overall holiday revenue, according to ShopperTrak. Black Friday made up about half of that.