"Men of a Certain Age": Cool is overrated

TNT's moving, understated drama focuses on the disappointments and the sweetness of growing old among old friends 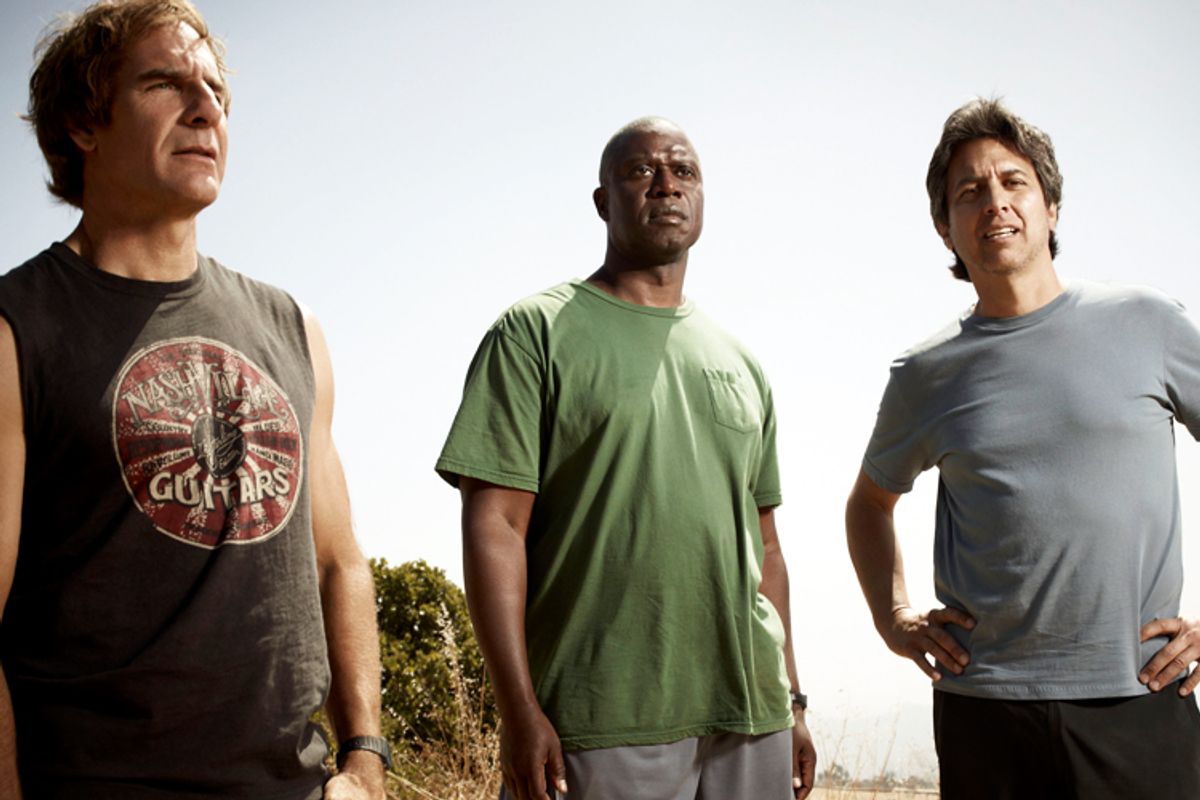 Scott Bakula, Andre Braugher and Ray Romano in "Men of a Certain Age"
--

When we're young, we think old people are nice to each other because they're fake. I was walking the dogs with my 14-year-old stepson yesterday and we passed a couple on the sidewalk. "Hi, how are you?" the man said. "Great, how are you?" I replied.

"That was weird," my stepson said. "It's like he says the same thing to everyone."

"OK, have a great weekend!" I replied.

Old people are a little checked out, it's true. But we're amiably comatose. This friendly state of autopilot is the only way we've found to manage our dashed dreams, our growing contempt for the culture, our creeping disappointments, our fibromyalgia. We grind our teeth at night and have vivid dreams about screwing cheerleaders. We resent the unflattering shape of matchstick jeans and daydream about gigantic claw-foot bathtubs we can't afford. Our elbows hurt and our hair always looks bad and we secretly think all electropop sounds like Kraftwerk.

Recognizing the defeat in each other's eyes, we smile warmly and say things like, "Of course! We'd love to," and "Fantastic! I can't wait!" because we recognize that everyone is flawed and just barely able to accept their own mediocrity or tolerate the frustrations of advancing age. The least we can do is be nice about it.

Youngish (under 35) skeptics will tell you that the men of "Men of a Certain Age" (premieres Dec. 6 on TNT) don't talk like men at all, they talk like post-menopausal book club members. This show isn't made for those youngish people, though. It's made for the oldish (over 35) among us, who recognize the self-doubting, second-guessing, pot-bellied guys on their TV screen as a painfully palpable embodiments of the humiliations and tiny little ego victories of middle age.

The charms of "Men of a Certain Age," like the charms of growing old, are lost on the common whippersnapper. While youngish people tend to reevaluate and reappraise their oldest friendships constantly, questioning whether this or that old friend is up to speed with just how advanced and mature and evolved the new "me" is, old people recognize that they haven't actually advanced or matured or evolved much over the years. Thus do they humbly turn to each other, all rumpled feathers and matted fur, and sigh deeply. Less important than how far you've come, to old friends, is how far you haven't come -- and also, where you were before you got old. The fundamental importance of old friendships, plus that peculiar flavor of shared, comfy nastiness that bounces around between old friends -- these make up the soft center of "Men of a Certain Age." We grow old, we fail, we reproach the gods and grimace in pain, and then we meet to eat pie and complain at the same diner each week.

"Everybody's like, 'Oh, don't give up on your dream, Terry!'" Terry (Scott Bakula) tells lifelong friends Joe (Ray Romano) and Owen (Andre Braugher) of his acting career. "What would've been so bad if I had, huh? We're at this place in our lives, we've come all this way, and I've got nothing to show for it. You've got something -- families, careers ..."

"Families suck," Joe replies. This harshness, which of course we don't expect and don't believe entirely (even from a divorced guy with an anxious teen son and a moody teen daughter), is what balances out the vulnerability of "Men of a Certain Age." As hand-holdy as the talk can get, these guys are still just guys.

And if you think their confessional, supportive tone with each other comes out of left field, tell that to the wood fence contractor who volunteered to me last week that he'd been "journaling a lot" about his dad's death, or the plumber who, apropos of nothing, discussed the struggles of raising teenagers. Middle-aged strangers tell each other emotional stuff out of the blue, and middle-aged friends tell each other everything. (The only exception may be certain varieties of hipster intellectual, who could literally chat about Sufjan Stevens' latest album on their deathbeds instead of confessing the hopes, fears and regrets of their final hours.)

But the utter lack of hipness of "Men of a Certain Age," the total lack of concern for what's deemed cool and what isn't, the complete disregard for matching the breakneck pace, the action, the swooning romances, the spitty outbursts, the shiny thrills of other TV shows, is exactly what makes this drama so lovable. Where other dramas would pack in more zaniness and intrigue in every available second of airtime, "Men of a Certain Age" rolls out the familiar, the ordinary, and locates poetic folds and sweet pockets of emotion therein: Joe's employees are two pure-intentioned teenagers who are genuinely confused by his old-guy ways, and one slow-moving old Spanish-speaking guy, Carlos, who sleeps on the job but Joe still can't stand to fire him (he lays him off then hires him back at the end of the first season). Owen works at a car dealership owned by his dad, a thoroughly mundane job that Owen dislikes most of the time, but also occasionally excels at. When he breaks away to work for another dealership at the start of the second season, his father is angry, but his respect and investment in his son finally start to emerge out of the fog of his constant hectoring. Even Terry, with his acting career, has encounters with the film industry that will strike anyone who's actually worked production as hauntingly authentic, less focused as they are on stars and perks and glamour than on a steady flow of deeply humiliating interactions with the most unsavory sorts of egomaniacs imaginable. The big promises and untrustworthy allegiances Terry forms with one director (who refers to him, tellingly, as "T-bag"), only to have the rug pulled out from under him on a whim, echo some essential Hollywood experience that's rarely portrayed with quite as much clarity and empathy.

But the big impact of this drama comes in its quietest moments: Joe and his son, Albert (Braedon Lemasters), are driving home from the movie theater after Albert has had an anxiety attack and insists that they leave. Suddenly, Albert wants to know if Joe is embarrassed by him. "Embarrassed? No, man. Never," Joe says, his eyes starting to well up a little. "You're my hero. I mean that. You're doing great, man. I'm proud of you." It's simple dialogue, nothing fancy, nothing too clever or provocative, but that's what gets you in the throat sometimes.

Like the oldish and crumpled and vaguely resentful among us, "Men of a Certain Age" casts aside sophistication and witty banter for the comfort of what's real -- even when what's real is disappointments, missed connections and inadequate attempts to reassure. In accepting our frailty, we locate our souls.

You're doing great, "Men of a Certain Age." We're proud of you.

Oh, and have a great weekend!

Men Of A Certain Age Our Picks Television Tv