"Toilets": The hidden meaning of toilets 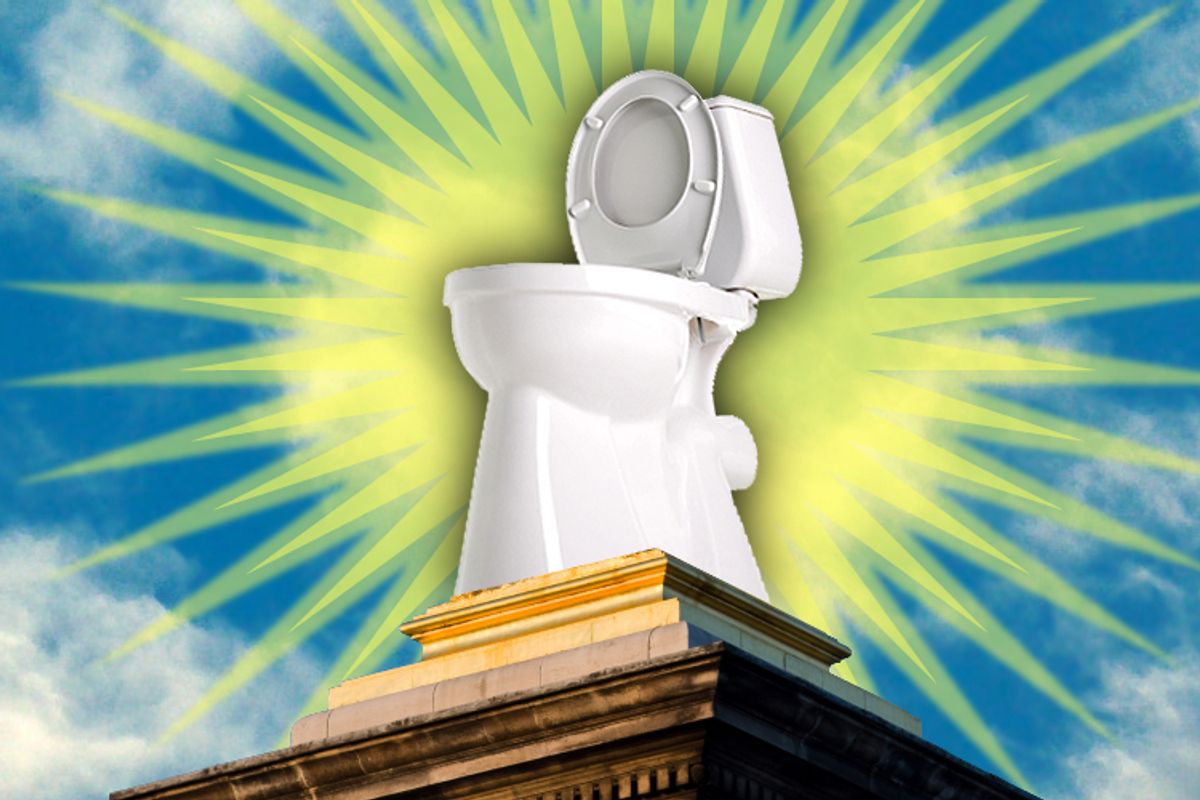 Why do we have so much trouble talking about toilets? After all, our anxieties about bathrooms can dictate the way we live our lives: We stress out about people overhearing our bodily functions in public restrooms; cab drivers in New York City have to pee in bottles for lack of bathroom breaks; women in some third-world countries must dehydrate themselves during the day to avoid relieving themselves in the presence of men. But try to bring up defecation or urination in a conversation, and all you'll get are jokes, disgust or awkward silence.

We may not feel comfortable discussing them, but questions of where and how we do our business, particularly in public, have a tremendous impact on our everyday lives. That's why "Toilet: Public Restrooms and the Politics of Sharing," a new collection of academic essays, is so necessary. Edited by NYU sociology professor Harvey Molotch and doctoral student Laura Norén, "Toilet" is a collection of 12 essays by urbanists, historians, sociologists and other cultural analysts; it includes chapters on everything from urban planning to gender theory and crime, all examined through the prism of the public toilet.

Salon spoke with Molotch over the phone about the challenges of writing about the bathroom, why the common Western "chair toilet" isn't the healthiest way to go, and which country boasts the world's most awesome latrine.

It turns out the way that our culture uses the bathroom, sitting, might not actually be the most healthful way to do it. Many societies have "squat toilets": People squat and rinse with water instead of wiping with paper, which is healthier not only in terms of intestinal issues, like making constipation less of a problem, but also from a sanitation standpoint. That's really surprising. Why is squatting better, and if it is, why do we keep sitting?

Sitting is a cultural phenomenon, and it developed in royals as a way of giving deference and honor, as in thrones. When having objects became democratic, such that a lot of different people could have chairs and seats, sitting became commonplace. And as we adapted to this, we lost the muscle power to squat. The chair has snatched our body. We think we "use" the chair, but actually we've been conquered by the chair. When we go to have a bowel movement, this really comes to the fore. We don't have the musculature to do it any other way.

The squatting position, on the other hand, causes the body to be arrayed in a very optimal way for expelling feces. At the same time it has the advantage that you're not touching any appliance while you're doing it, which is a phobia for many people. Feces does communicate disease, so you don't want to have contact with it. That also goes along with the water, and most people I consult on this say that this is the more complete cleansing.

Gender issues related to toilets come up over and over again in the book. Should public toilets go unisex?

A public restroom has really become the last bastion of sexual segregation. And so, for good or for bad, it reinforces that separation. On the pro side, it's just inefficient in terms of the use of space to have a separation of males and females. And there are people who cross-dress in terms of gender, or who are in different stages of sexual transition. For gays and lesbians, the sexual threat of someone of the opposite sex is not as great as the sexual tension of someone of the same sex. So the founding notion of this absolute separation is not true biologically, culturally or erotically.

I wonder about it, too, from a practical standpoint. On a smaller scale it seems fine, but I have a really hard time imagining unisex bathrooms at a rest stop or something. It seems like it would be both uncomfortable and unsafe.

In terms of security, anything that limits the number of people in a place actually provides access for criminals to do their mayhem. If you have anything that removes half the population from being in your presence, it eliminates that possibility of someone coming to your aid, so the security issue is actually a counterweight to the idea of separating men from women.

Why is the study of public toilets so important?

It involves an arena of life that affects a large number of people but is ordinarily not very easy to talk about. You risk ridicule and the possibility that writing about "poo poo" will cause people to think that you are engaging in something distasteful. People think that it defames the academic enterprise. At a very concrete level, when we're writing, we don't know exactly what kind of terminology to use, since all of it is in a taboo arena. And there's a kind of continuum of taboo, with "shit" at one end and "feces" on the other. If you use terms like "feces," you're using a technical term, turning off readers and avoiding the words that people use in everyday life. And if you use words like "poo," you look ridiculously cute. The New York Times doesn't use the word "shit." So settling on a certain vocabulary is a big decision.

It's important is because it determines who can go out in the city and who cannot, who can use public space and who cannot. Old people have a whole lot of trouble because they've got to go more often — they also have a lower tolerance for difficult situations, including cleanliness — along with pregnant women and people with babies. There's a catalog of who needs public restrooms in a way that other people don't. So it falls differently on different populations.

It's also a laboratory for what we are willing to do to prevent some people from doing things we don't like, and how much punishment will we give to everybody in order to ensure that. In public restrooms, we worry that people will have sex in them, and that people will do drugs in them, or vandalize them. The result of this is that we withdraw from providing the public facility altogether, and close down facilities, or don't build them as we build new communities and new buildings. This is the dilemma in almost every sphere of public life, really.

Which places are actually good at managing their public toilets?

The best restrooms, the best toilets, are in Japan, flat out. It's true in many respects. They take toilets more seriously than anywhere else in the world. In the U.S., I don't think any city has done a good job. New York is not very good at it. They've closed a great majority of the public restrooms. We've really struggled with this, especially the more liberal cities like San Francisco, Santa Monica and Seattle. And one of the potential solutions is automated toilet facilities, the freestanding ones where you put money in.

But having to pay to use a public toilet seems like it would widen the inequality gulf.

It does, and that's the great disadvantage. The advantage in the U.S., and in much of the world, is that it's the only way we can get anything done. But it's a terrible thing, because it means that people at the very bottom are the ones that are forced to pee on the wall, or in the alley, or defecate in public.

As you point out in the book, toilet issues pose a grave problem in poor countries, where the lack of proper facilities can be not just an inconvenience but a matter of life and death.

It's mainly a problem for women, because they are the ones that are most deprived of these facilities. In many parts of the world, the gender differentiation and the burden on women is just overwhelming. In some places, when they use public latrines, including open fields, women have to go before daylight. So they try to gauge what they eat and when they eat it, or just miss work or school, which then further multiplies, reinforces, the problems they have. And there, the health problems are great. The problems of infection, intestinal infection, are increased for women in these particular cultures. And then, of course, there are the problems of menstruation, where you can't have a system to deal with it — it runs on its own clock. But it's not on the agenda of foreign aid. It's not spoken of.

Where is the future of toilet technology headed?

More and more automation. Our bodies have to be choreographed by the appliance. And it's kind of an extension of the way the toilet has snatched our body. We've all experienced the frustration of not knowing how to make the water go on. The electronic appliances assume a kind of conformity: Some people go into the cubicle and they don't do the thing that is prescribed to them, and toilet is not ready for that. Now, the automatic feature presumes an automatic person: Someone who will go in, pull his pants down, and get up. But many people don't do exactly that.

The one at Bryant Park in New York City. That space was completely redesigned years ago, and a keystone of the whole project was the restroom. Rather than just close the restroom, which would be the normal way of securing the park, they decided to make it really nice. They have a huge bouquet of fresh flowers kept at the entrance of the little lobby. What's that saying is, "Look, this place is maintained. Someone is here on a regular basis, and we take its beauty and pleasantness very seriously." And they do other things at Bryant Park to make sure that is true, like extremely frequent cleaning.

It's a toilet from Japan, in which the top of the toilet is a sink. So you're washing your hands in the sink, and that water is going down into the tank, and will be that water that's used in the next flush. It cuts your water usage in half, and furthermore, when you wash your hands, you are now leaving the cubicle with clean hands.

It is! It's so simple! And it saves space, because now you don't need separate space for the sink. The Japanese have had these things for many, many years.

They also have it that when you use the facility, you can push a button that will make music and disguise the sound. We all know what sounds we make. There's nothing evil about it. It's perfectly natural, necessary and needed. But we feel horribly exposed and humiliated when someone can hear us doing these things. So the solution for the Japanese is you press a button and other sounds happen, and people can't hear the specifics of how your body makes its noise.