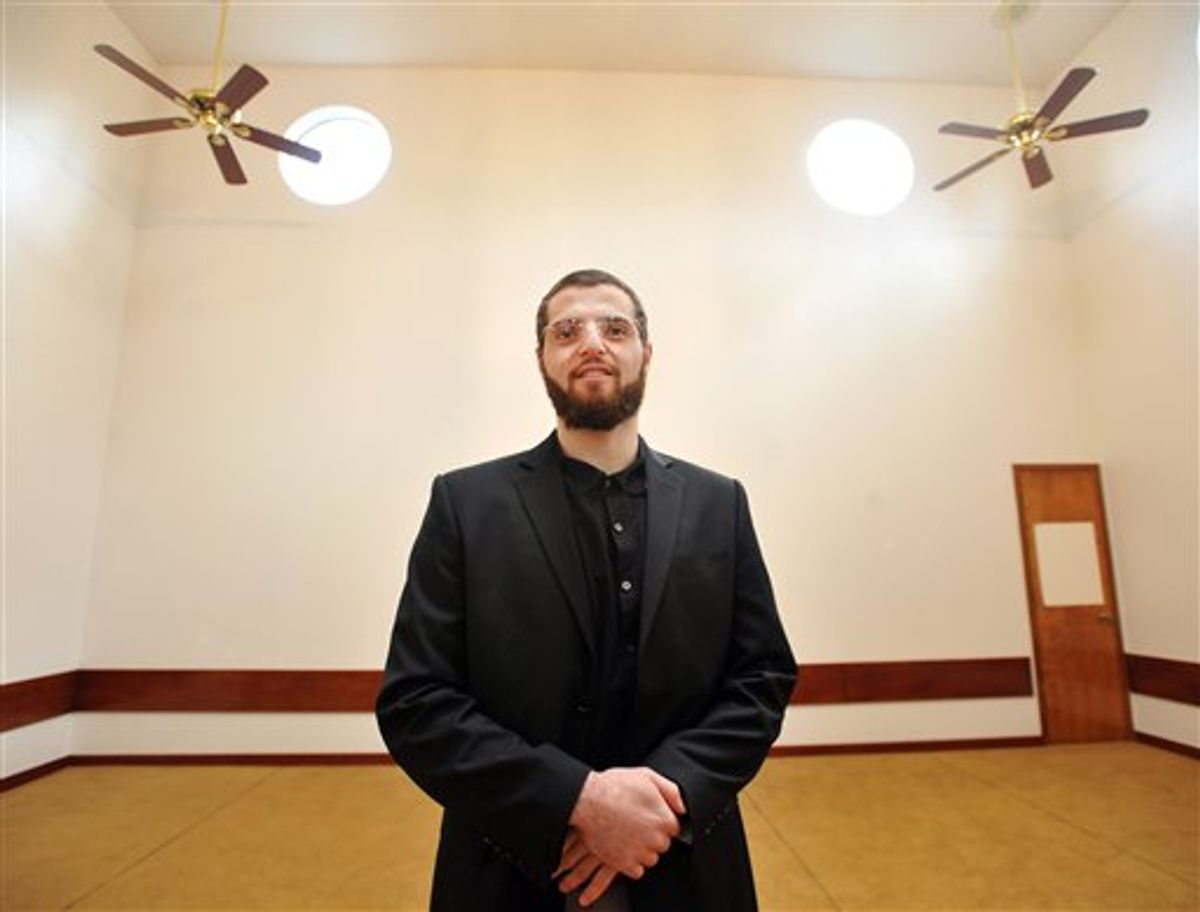 Anger on Sunday over a Somali-born teen's failed plan to blow up a van full of explosives during Portland's Christmas tree lighting ceremony erupted in arson on Sunday when a fire damaged an Islamic center frequented by the suspect, authorities said.

Police don't know who started the blaze or exactly why, but they believe the Islamic center in Corvallis was targeted because terror suspect Mohamed Osman Mohamud, 19, occasionally worshipped there.

Yosof Wanly, the imam at the Salman Alfarisi Islamic Center, said he was advised by friends to take his family out of their home because of the potential threat of hate crime, and members decried the alleged arson attack. No one was injured, and the fire was contained to one room.

"We know how it is, we know some people due to ignorance are going to perceive of these things and hold most Muslims accountable," Wanly said. "We do what we can, but it's a tough situation."

The failed attack on Portland's Christmas tree lighting ceremony on Friday is testing tolerance in what has typically been a state accepting of Muslims, and the FBI warned it would not accept retribution for Mohamud's alleged plot.

The agency was working closely with leadership at the center as agents investigated the fire, said Arthur Balizan, Special Agent in Charge of the FBI in Oregon. A $10,000 reward was offered for information leading to an arrest.

Ahson Saeed, 25-years-old who worships at the center, called the fire "a heinous act."

The fire at the center was reported at 2:15 a.m., and evidence at the scene led authorities believe it was set intentionally, said Carla Pusateri, a fire prevention officer for the Corvallis Fire Department.

After daybreak, members gathered at the Corvallis center, where a broken window had been boarded up.

"I've prayed for my family and friends, because obviously if someone was deliberate to do this, what's to stop them from coming to our homes and our schools?" said Mohamed Alyagouri, a 31-year-old father of two, who worships at the center. "I'm afraid for my children getting harassed from their teachers, maybe from their friends."

Mohamud was being held on charges of plotting to carry out a terror attack in Portland. He is scheduled to appear in court on Monday, and it wasn't clear if he had a lawyer yet.

On Friday, he parked what he thought was a bomb-laden van near the ceremony and then went to a nearby train station, where he dialed a cell phone that he believed would detonate the vehicle, federal authorities said. Instead, federal authorities moved in and arrested him. No one was hurt.

Authorities have not explained how Mohamud, an OSU student until he dropped out on Oct. 6, became so radicalized. Mohamud graduated from high school in Beaverton, although few details of his time there were available Saturday.

Wanly described him as a normal student who went to athletic events, drank the occasional beer and was into rap music and culture. In the days leading up to his arrest Friday, however, Mohamud's friends thought he appeared at edge, Wanly said.

Officials said Mohamud had no formal ties to foreign terror groups, although he had reached out to suspected terrorists in Pakistan.

FBI agents say they began investigating after receiving a tip from an unidentified person who expressed concern about Mohamud. Wanly said Mohamud was religious but didn't come to the mosque consistently.

Beginning in August 2009, court documents allege, Mohamud began e-mail communications with a friend overseas who had studied in Oregon, asking how he could travel to Pakistan and join the fight for jihad.

The e-mail exchanges led the FBI to believe that Mohamud's friend in Pakistan "had joined others involved in terrorist activities" and was inviting Mohamud to join him, prosecutors said.

Mohamud tried to board a flight to Kodak, Alaska, on June 14 of this year from Portland but wasn't allowed to board and was interviewed by the FBI, prosecutors said. Mohamud told the FBI he wanted to earn money fishing and then travel to join "the brothers." He said he had previously hoped to travel to Yemen but had never obtained a ticket or a visa.

Less than two weeks later an agent e-mailed Mohamud, pretending to be affiliated with one of the people overseas whom Mohamud had tried to contact.

Undercover agents then set up a series of face-to-face meetings with Mohamud at hotels in Portland and Corvallis.

During their first meeting on July 30, Mohamud told an agent there were a number of ways he could help "the cause," ranging from praying five times a day to "becoming a martyr."

Mohamud replied he "thought of putting an explosion together but that he needed help doing so," the documents said.

At a second meeting on Aug. 19 at a Portland hotel, the agent brought another undercover agent, the documents said, and Mohamud told them he had selected Pioneer Courthouse Square for the bombing.

On Nov. 4, in the backcountry along Oregon's coast, agents convinced Mohamud that he was testing an explosive device -- although the explosion was controlled by agents rather than the youth.

The affidavit said Mohamud was warned several times about the seriousness of his plan, that women and children could die, and that he could back out.

Prosecutors say after the trip to the backcountry, Mohamud made a video in the presence of one of the undercover agents, putting on clothes he described as "Sheik Osaka style:" a white robe, red and white headdress, and camouflage jacket. He read a statement speaking of his dream of bringing "a dark day" on Americans and blaming his family for getting in the way.

Friday, an agent and Mohamud drove into downtown Portland to the white van that carried six 55-gallon drums with detonation cords and plastic caps, but all of them were inert.

Authorities said they allowed the plot to proceed to obtain evidence to charge the suspect with attempt.

Tens of thousands of Somalis have resettled in the United States since their country plunged into lawlessness in 1991, and the U.S. has boosted aid to the country.

Wanly, the imam at the Corvallis center, said the local populace has long been accepting of Muslims.

"The common scene here is to be very friendly, accepting various cultures and religions," Wanly said. "The Islamic center has been here for 40 years, it's more American than most Americans with regards to age."