While Jimmy's mother lets loose her poison, the tensions between Nucky and Margaret escalate 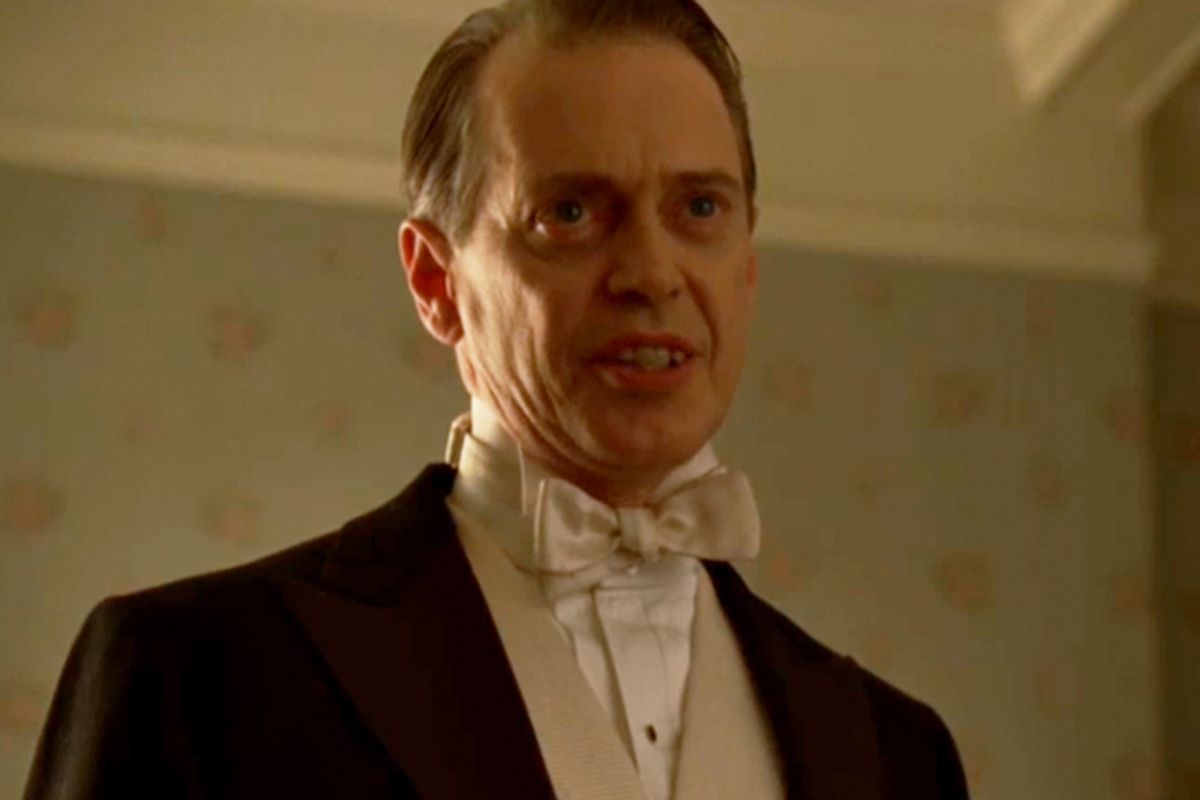 In the penultimate episode of this season of "Boardwalk Empire," Harry Houdini's frequently invoked brother, Hardeen (Remy Auberjonois) finally makes an appearance — upside-down, red-faced and struggling to remove himself from a straitjacket. Later, he performs for a few guests in Nucky's suite, dazzling a smitten Margaret with his sleight-of-hand. "I knew you were deceiving me, but you managed it anyway," she coos. "Deception requires complicity, however subconscious," Hardeen explains. "We want to be deceived."

Proof of Hardeen's theorem — or least part of it — is only a few feet away, in the queasy face of Harry Prince (Michael Badalucco), who has just lost his entire fortune to Charles Ponzi. (If you're keeping track of the timeline, that puts the episode in mid-August, 1921.) Perhaps Harry didn't want to be swindled, and certainly not ruined, but he wanted something else badly enough to ignore something he knew couldn't be true. It's an axiom of the con man's trade that you can't taken anyone who isn't willing to be taken. Self-interest is the most potent form of misdirection.

In many ways, Margaret is less naive about Nucky Thompson than she's ever been. She's seen the extent of his corrupt empire laid out in black and white. But knowing the length of Nucky's reach only served to make her attracted to him. Whether she's aware of it or not, she's attracted to his understanding of power, and wants some of her own. Even Van Alden's unsettled accusations that Nucky had a hand in her husband's death don't cause her to deviate from her course. It's only when she finds Nucky getting slightly too comfortable with Harry's mistress — now herself destitute after Harry stole back the money she'd been lifting from him — that Margaret sees through to Nucky's Machiavellian core. He does have genuine affection for her, unless he's deceiving himself as well, but he's using her nonetheless, to shore up the women's vote with an unexpectedly challenging election only a few months away.

Nucky hasn't been seeing her too clearly, either. When the tensions between them finally give way to a full-blown fight, he counters her (unanswered) accusation of murder by venting his anger over the fact that she's been postcoitally douching with Lysol in order to avoid getting pregnant (following the advice laid out in "Family Limitation"), a bizarre thing for him to take offense at given that he has no evident desire to marry her or any desire to have a child. (One doubts he raised similar objections with Lucy Danziger.) He's attracted to Margaret in part because she reminds him of his late wife, but the fact that she's actively avoiding getting pregnant by him gives the lie to his subconscious fantasy. She won't be complicit in his illusion.

"Paris Green," the title of this week's episode, refers to a brand of rat poison as well as as a prized pigment, a particularly vivid shade of green that could only be achieved with a mixture including large quantities of arsenic. Jimmy's mother, Gillian, has been slipping the toxic substance into the Commodore's food, pushing him near enough to death that she can insist his son — that is, her son — come to visit. The powerful father Jimmy alluded to turns out to be Atlantic City's former power broker, who bedded Gillian when she was 13 and gave his aide Nucky Thompson the job of making sure the child was looked after. The Commodore's need for reconciliation was great enough to look past the unlikeliness of her suddenly choosing to bury the hatchet, and it nearly costs him his life. Was Gillian trying to kill him, and does she only stop because Jimmy discovers her plan? Or was her goal to force Jimmy and his father to reconnect, knowing there was no other way Jimmy would pay him a visit? Perhaps it started as the former and moved into the latter, as the rift between the Commodore and his protégé grew deeper and she realized he might be looking for a more palatable heir. "The wrong man's running this town," the Commodore tells Jimmy when he finally drops by. The notion seems to make Jimmy uneasy enough to vomit, although we later realize it's due to the arsenic-laced cookie he took from his father's bedside.

It isn't greed that's kept Agent Van Alden from spotting the deception under his nose, but arrogance, and the ease with which he assumes that those who fail to do their jobs as well as he thinks he does his must be simply incompetent. Unfortunately for Agent Sebso, Van Alden is paranoid as well as a megalomaniac, and he's been stewing over Sebso's story of shooting a key witness in self-defense for some time. Van Alden regards everything about Sebso as suspect, from his Jewish faith to the ease with which he uses a pair of chopsticks. But his relentless grilling is enough to rattle Sebso's cool, and when he puts in for a transfer, Van Alden smells weakness. Sebso, looking to get Van Alden off his back, appeals to Nucky for advice. Nucky gives him the approximate location of a bootleg distillery in the woods, but what they find instead is a black congregation in the midst of a riverbank baptism. Seeing a fellow man of god, Van Alden is confrontational rather than congenial, but the pastor's defense of his faith wins Van Alden's respect. Van Alden throws Sebso in the water as if to forcibly convert him to Christianity and instill the fear of hellfire that looms so large in Van Alden's mind. But when Sebso fails to repent, the baptism becomes a drowning. The congregants watch as Van Alden holds his colleagues body under until he stops kicking, unable to act against a white federal agent with a loaded pistol.

Last, and most poignant, Jimmy's wife, Angela, makes her final plans to run off to Paris with the photographer's wife, leaving Jimmy a "Dear John" letter and walking out the door with her suitcase in one hand and her son's hand in the other. But when she gets to their studio, she finds they've gone, run off in the middle of the night, presumably with the transatlantic tickets she's bought. By the time she gets home, Jimmy has read her letter, leaving her alone, betrayed and trapped. Deception requires a willing partner, and she has none.