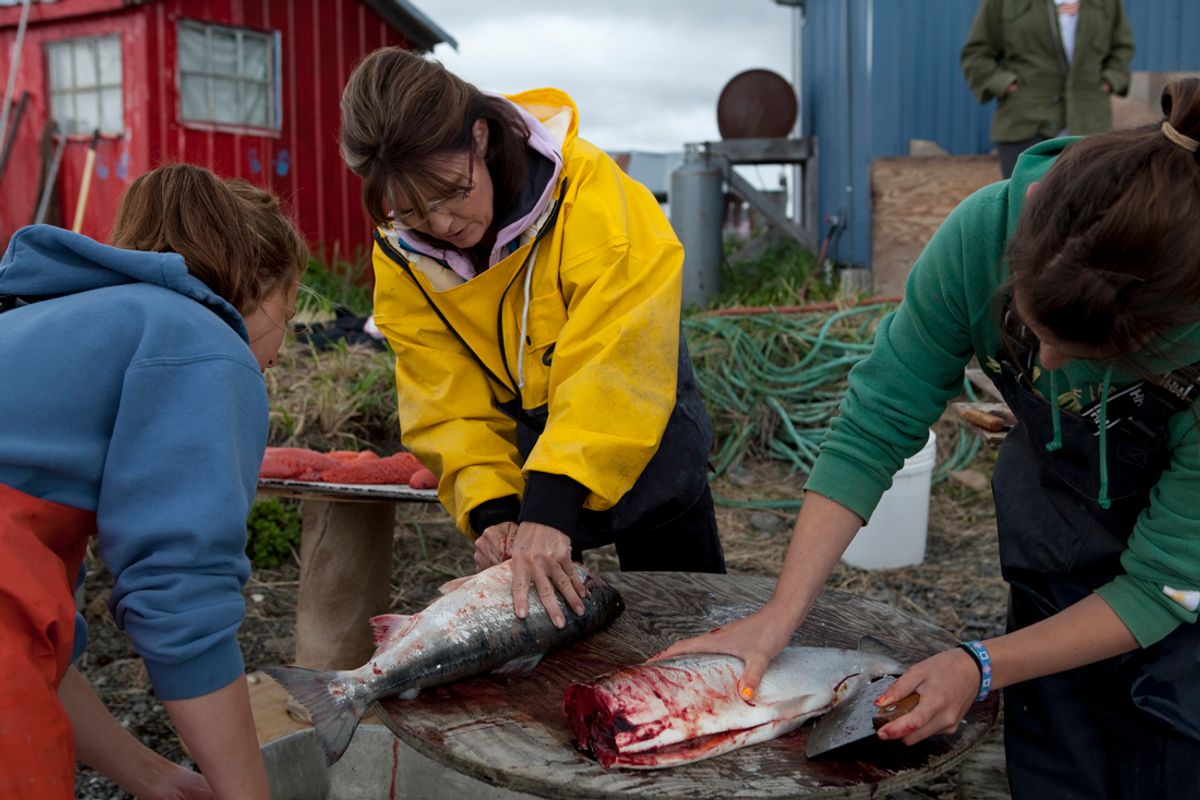 Sarah loves work so much that she and work should get a room and make sweet, procreational, Christian love.

During this week's hour long infomercial, she talked about how her son Track "needs to learn his father's work ethic" and how every decision she makes is to "connect to family, nature and work" and even that her dream for son Trigg, who has Down's Syndrome, is that everyone "treats him like one of the other kids … and expects work out of him." In Sarah's world you either work hard or look like you are, because Jesus is coming, got that?

Sarah loves Alaska so much that, during every episode, she takes us to a part of the state that we've never seen before. Only thing is, we kind of get the feeling that this is the first time she's seen it too -- or at least the first time she's been back to that particular hell hole since she found something else to do. Not to say that much of Alaska isn't stunning to look at, but most of this particular episode took place in Dillingham and the fishing village of Ekuk -- places largely composed of mud and fish heads. "She seems to love it there," Barbara Bush quipped recently about Sarah's love of the state, "I hope she stays."

Sarah loves family so much that she made a point of telling us how she likes to go back to Ekuk every year to visit Todd's family. Todd's family members appear to be the only residents of Ekuk -- which made the fact that she didn't recognize Todd's 20-year old cousin when she first saw her a tad bizarre. "I remember you when you were just a baby!" she exclaimed after realizing who she was. I guess the cousin had been smoking fish in the other building during Sarah's yearly visits? Or maybe she'd recently had some work done?  Kidnapped and raised by wolves? Burka clad?

This episode also featured the return of Track -- Todd and Sarah's eldest. We learned that Todd thinks Track is dumb, and he may be right. Track is taking over the family fishing business and he can't seem to do anything right. He breaks the trailer. He leaves the fishing shack a mess. He sleeps late. He can't even seem to catch fish, even when it appears that the only thing one needs to do to catch fish in Alaska is roll out a net, wait a day, and drag the net back into the boat. He's off-Track.

Through the simmering conflict, Sarah explains the father/son dynamic to us -- so that we understand their relationship is all part of the "fightin' and learnin' and lovin' and all-Amerikin-in'" struggles that we all go through. Tight smile. Camera close up. Hold it. HOLD IT.

We also learned this episode that Willow is a little minx. We caught a glimpse of her naughty side in earlier episodes, but when her great-grandmother was giving a heartfelt prayer before her sweet 16 birthday dinner and all Palin heads were bowed in reverence, Willow opened her eyes, looked straight into the camera and smiled a mischievous grin. And we knew then (homophobic Facebook rant and rumors of illegal drugs and vodka-swilling aside) that she was TROUBLE.

So, we came to the end of another mind-numbing Palin post-card, this one capped off to the swell of patriotic music on July 4th as fireworks erupted on the beach at midnight, just as the sun was beginning to set. Sarah held son Trigg as the light framed her face, Piper danced in circles on the sand, Todd re-folded dumb Track's net, Track grunted and lit matches and Willow pocketed a dime-bag from a skinny, pimply faced lad while he moved from side to side nervously -- before lifting a hoodie over his head and disappearing down the beach -- hiking his pants up as he went.

It was just another day in Sarah Palin's Alaska, friend to North Korea, bastion of fish heads and family -- where people work until midnight, talk about how hard they've worked until 2am and rise at 4am -- for folks to start working. Or they sleep all day and smoke pot.