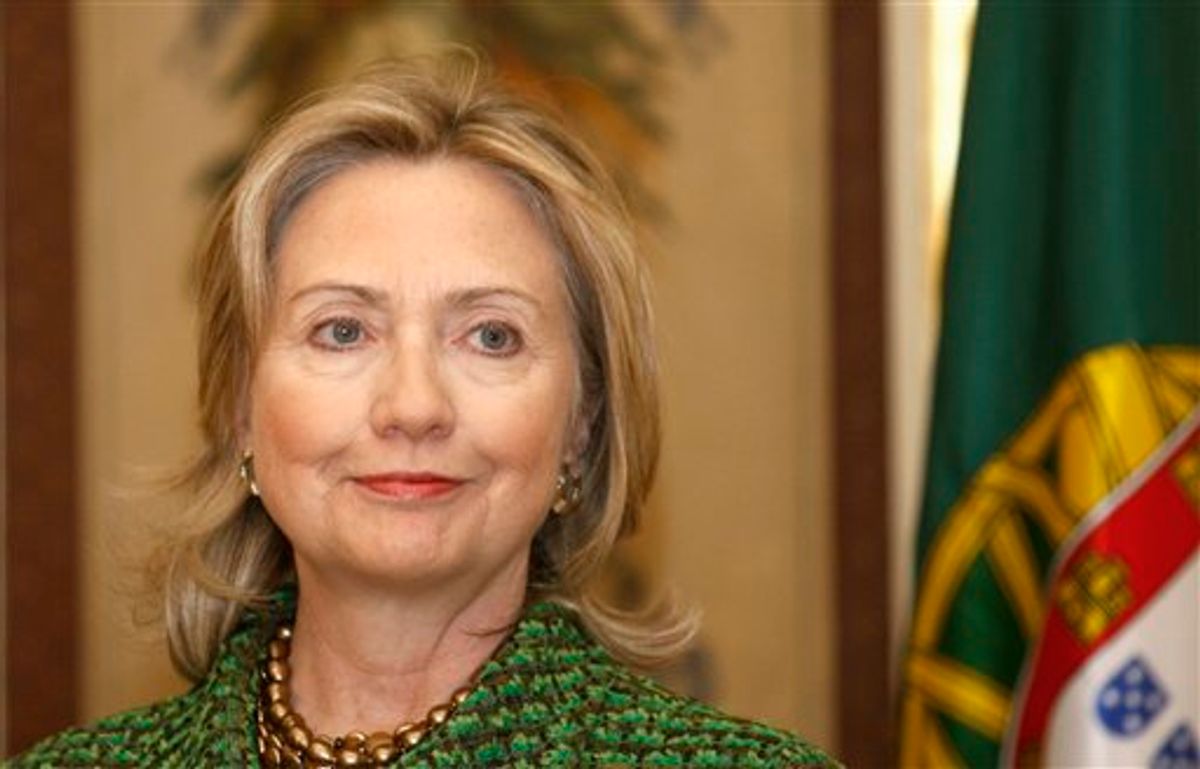 FILE - In this Nov. 19, 2010 file photo, US Secretary of State Hillary Rodham Clinton looks on during a joint news conference with Portuguese Foreign Minister Luis Amado after their meeting on Friday at the Necessidades palace in Lisbon. Clinton on Friday, Nov. 26, 2010 spoke with the Chinese government about the expected release of classified cables by the Wikileaks website. (AP Photo/Francisco Seco, File) (AP)
--

The release of more than 250,000 classified State Department documents forced the Obama administration into damage control, trying to contain fallout from unflattering assessments of world leaders and revelations about backstage U.S. diplomacy.

The publication of the secret memos and documents amplified widespread global alarm about Iran's nuclear ambitions and unveiled occasional U.S. pressure tactics aimed at hot spots in Afghanistan, Pakistan and North Korea. The leaks also disclosed bluntly candid impressions from both diplomats and other world leaders about America's allies and foes.

Italy's Foreign Minister Franco Frattini called the release the "Sept. 11 of world diplomacy," in that everything that had once been accepted as normal has now changed.

In the wake of the massive document dump by online whistleblower WikiLeaks and numerous media reports detailing their contents, Secretary of State Hillary Rodham Clinton was expected to address the diplomatic repercussions on Monday. Clinton could deal with the impact first hand after she leaves Washington on a four-nation tour of Central Asia and the Middle East -- a region that figures prominently in the leaked documents.

In London, David Field, a spokesman for British Prime Minister David Cameron, said "it's important that governments are able to operate on the basis of confidentiality of information." French Foreign Ministry spokesman Bernard Valero said "we strongly deplore the deliberate and irresponsible release of American diplomatic correspondence by the site Wikileaks.:"

None of the disclosures appeared particularly explosive, but their publication could become problems for the officials concerned and for any secret initiatives they had preferred to keep quiet. The massive release of material intended for diplomatic eyes only is sure to ruffle feathers in foreign capitals, a certainty that already prompted U.S. diplomats to scramble in recent days to shore up relations with key allies in advance of the leaks.

At Clinton's first stop in Astana, Kazakhstan, she will be attending a summit of officials from the Organization for Security and Cooperation in Europe, a diplomatic grouping that includes many officials from countries cited in the leaked cables.

The documents published by The New York Times, France's Le Monde, Britain's Guardian newspaper, German magazine Der Spiegel and others laid out the behind-the-scenes conduct of Washington's international relations, shrouded in public by platitudes, smiles and handshakes at photo sessions among senior officials.

The White House immediately condemned the release of the WikiLeaks documents, saying "such disclosures put at risk our diplomats, intelligence professionals and people around the world who come to the United States for assistance in promoting democracy and open government."

U.S. officials may also have to mend fences after revelations that they gathered personal information on other diplomats. The leaks cited American memos encouraging U.S. diplomats at the United Nations to collect detailed data about the U.N. secretary general, his team and foreign diplomats -- going beyond what is considered the normal run of information-gathering expected in diplomatic circles.

State Department spokesman P.J. Crowley played down the diplomatic spying allegations. "Our diplomats are just that, diplomats," he said. "They collect information that shapes our policies and actions. This is what diplomats, from our country and other countries, have done for hundreds of years."

The White House noted that "by its very nature, field reporting to Washington is candid and often incomplete information. It is not an expression of policy, nor does it always shape final policy decisions."

"Nevertheless, these cables could compromise private discussions with foreign governments and opposition leaders, and when the substance of private conversations is printed on the front pages of newspapers across the world, it can deeply impact not only U.S. foreign policy interests, but those of our allies and friends around the world," the White House said.

On its website, The New York Times said "the documents serve an important public interest, illuminating the goals, successes, compromises and frustrations of American diplomacy in a way that other accounts cannot match."

Le Monde said it "considered that it was part of its mission to learn about these documents, to make a journalistic analysis and to make them available to its readers." Der Spiegel said that in publishing the documents its reporters and editors "weighed the public interest against the justified interest of countries in security and confidentiality."

WikiLeaks founder Julian Assange claimed the administration was trying to cover up alleged evidence of serious "human rights abuse and other criminal behavior" by the U.S. government. WikiLeaks posted the documents just hours after it claimed its website had been hit by a cyberattack that made the site inaccessible for much of the day.

But extracts of the more than 250,000 documents posted online by news outlets that had been given advance copies of the documents showed deep U.S. concerns about Iranian and North Korean nuclear programs along with fears about regime collapse in Pyongyang.

The Guardian said some cables showed King Abdullah of Saudi Arabia repeatedly urging the United States to attack Iran to destroy its nuclear program. The newspaper also said officials in Jordan and Bahrain have openly called for Iran's nuclear program to be stopped by any means and that leaders of Saudi Arabia, the United Arab Emirates and Egypt referred to Iran "as 'evil,' an 'existential threat' and a power that 'is going to take us to war,'" The Guardian said.

Those documents may prove the trickiest because even though the concerns of the Gulf Arab states are known, their leaders rarely offer such stark appraisals in public.

The Times highlighted documents that indicated the U.S. and South Korea were "gaming out an eventual collapse of North Korea" and discussing the prospects for a unified country if the isolated, communist North's economic troubles and political transition lead it to implode.

The Times also cited diplomatic messages describing unsuccessful U.S. efforts to prod Pakistani officials to remove highly enriched uranium from a reactor out of fear that the material could be used to make an illicit atomic device. And the newspaper cited exchanges showing Yemen's president, Ali Abdullah Saleh, telling Gen. David Petraeus that his country would pretend that American missile strikes against a local al-Qaida group had come from Yemen's forces.

The paper also cited documents showing the U.S. used hardline tactics to win approval from countries to accept freed detainees from Guantanamo Bay. It said Slovenia was told to take a prisoner if its president wanted to meet with President Barack Obama and said the Pacific island of Kiribati was offered millions of dollars to take in a group of detainees.

It also cited a message from the U.S. Embassy in Beijing that included allegations from a Chinese contact that China's Politburo directed a cyber intrusion into Google's computer systems as part of a "coordinated campaign of computer sabotage carried out by government operatives, private security experts and Internet outlaws."

The Times said another batch of documents raised questions about Italian Prime Minister Silvio Berlusconi and his relationship with Russian Prime Minister Vladimir Putin. One cable said Berlusconi "appears increasingly to be the mouthpiece of Putin" in Europe, the Times reported.

Libyan leader Moammar Gadhafi, meanwhile, was described as erratic and in the near constant company of a Ukrainian nurse who was described in one cable as "a voluptuous blonde," according to the Times.

The State Department's top lawyer warned Assange late Saturday that lives and military operations would be put at risk if the cables were released. Legal adviser Harold Koh said WikiLeaks would be breaking the law if it went ahead. He also rejected a request from Assange to cooperate in removing sensitive details from the documents.