Do women undermine the brotherhood of war?

Britain renews its ban on women in armed combat, but not because female soldiers are less capable 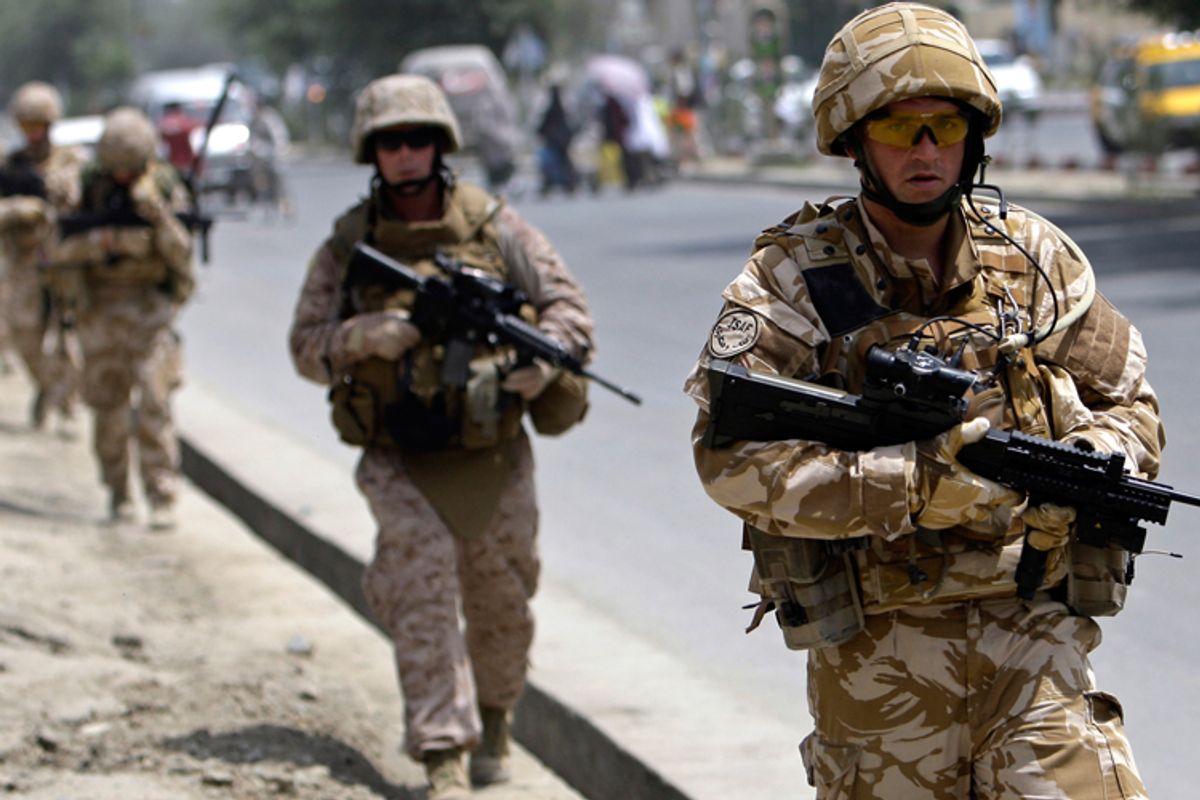 British soldiers patrol on a street in Kabul in July
--

Female soldiers are essential to Britain's Armed Forces, according to a new report. Some are even physically and psychologically fit for fighting on the front lines. And yet, a Ministry of Defense review concludes that women should be nonetheless excluded from armed combat roles. Cue the "it's me, not you" apologetics:

[W]omen are fundamental to the operational effectiveness of the UK Armed Forces, bringing talent and skills across the board, and in some areas they are better than men. Their capability in almost all areas is not in doubt, they win the highest decorations for valour, and demonstrate that they are capable of acting independently and with great initiative.

Despite all this, the report concludes that these capable, kick-ass women should be excluded from such roles because their presence might undermine "group cohesion," leading to "far-reaching and grave consequences." The argument here is reminiscent of the rationale behind "don't ask, don't tell" in the U.S. (Note, though, that Britain does allow for openly gay soldiers.) The policy holds that "out" gay or bisexual service members "would create an unacceptable risk to the high standards of morale, good order and discipline, and unit cohesion that are the essence of military capability."

In the case of the ban on women in armed combat, the belief is that females threaten to undermine the brotherhood of a unit. Not that there is actual evidence in that regard. In fact, the MoD's decision is plainly made on the basis that there is a lack of evidence showing that women will not hurt "group cohesion." Of course, actual evidence is hard to come by since women are proscribed from combat roles -- but a rare study on the matter found that men do not report lower group cohesion when women are present in combat situations. (On the other hand, women do rate unit cohesion lower in coed combat -- although, when other factors are controlled for, that disparity disappears.)

One piece of evidence that we do have: Despite the technical ban, women have already been fighting in combat roles. Earlier this month, U.S. Adm. Mike Mullen, chairman of the Joint Chiefs of Staff, admitted that many female soldiers are already fighting on the front lines -- or rather, that "there is no longer a clear delineation between the front lines ... and the sidelines" in the war in Afghanistan and Iraq.