Iran hawks are crowing after the latest WikiLeaks dump, but they've been playing this game for two decades now 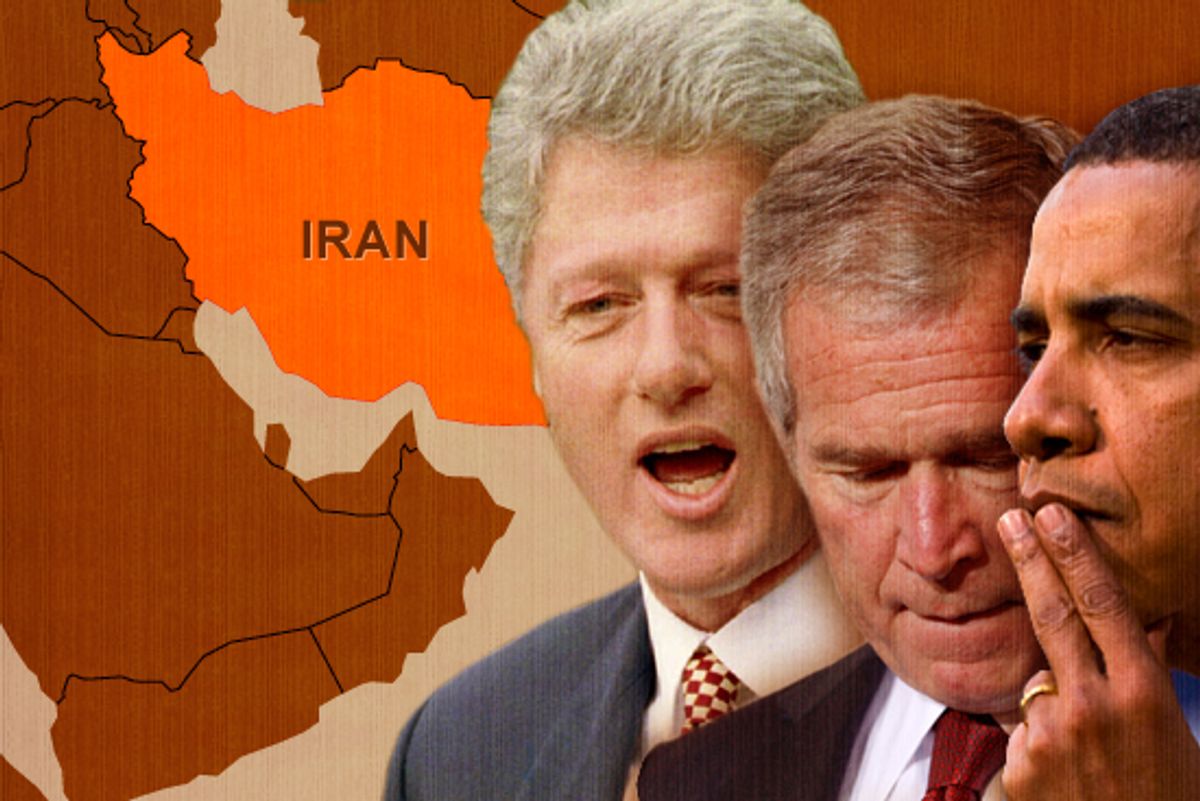 With the release of the first round of WikiLeaks State Department documents this week, Iran hawks in the United States have embraced a new line: Look at the number of Arab leaders who privately urged the U.S. to attack Iran, they say -- it isn't just Israel! A U.S. attack on Iran, David Frum, the former Bush speechwriter who helped sell the Iraq war, enthusiastically claimed on Monday, is "more politically feasible than it was 72 hours ago."

It's true that, as has long been suspected, some Arab leaders want very much for the U.S. to stop Iran, their regional foe, from getting a nuclear weapon. (This is in contrast to the majority view of Arab populations.) But what Arab autocrats tell U.S. diplomats in private is only a small part of the two decades of history that have led up to the present sense of crisis on Iran (whether misplaced or not).

It would take a book to tell the whole story.* Nevertheless, the WikiLeaks document dump occasions a useful opportunity to look at a few of the biggest moments along the way: of the fixation on Iran by Israel, the persistent push for a more aggressive policy by neoconservatives in the United States, and the development of Iran's contested nuclear program.

Throughout all of this, the Iranian government has claimed it is pursuing nuclear fuel for power and medical purposes, rather than for a weapon. However, it has also not cooperated fully with inspectors from the International Atomic Energy Agency. So it's still not clear how close Iran is to building a bomb -- and whether the Iranian government is truly determined to build one.

Below is an admittedly subjective and non-exhaustive timeline, focusing on the U.S. side of things, and designed to give a broad overview of how we got to this point:

March 1993: The Washington Post reports, in a piece headlined "Israel seeking to convince U.S. that West is threatened by Iran," that Israeli leaders are arguing to their American counterparts that Iran is a threat because, they say, it wants to obtain nuclear weapons, it supports Islamic fundamentalist groups, and it is pursuing hegemony in the Middle East. The piece quotes Israeli Prime Minister Yitzhak Rabin warning that Iran is on a "megalomaniacal" quest to be "a Middle East empire."

It notes that the Israelis traditionally pitched the U.S. on greater military cooperation by presenting Israel as a defense against Soviet expansionism in the region. Now, according to the story, the Israelis may be trying to create a new role as "a bulwark against Islamic extremism or Iranian regional ambitions."

Mid-1994: AIPAC, the pro-Israel lobby, circulates a 74-page paper in Washington arguing that Iran is a threat to Israel and the United States -- thus adding to the argument for new economic sanctions against Iran.

March 1995: President Clinton, under pressure from the pro-Israel lobby and its congressional allies, bars American oil companies from developing Iranian oil fields. The move kills a proposed $1 billion deal between Iran and Conoco for the company to develop two offshore Iranian oil fields.

May 1995: In a speech before the World Jewish Congress in New York, Clinton declares that he will impose a trade embargo on Iran, suspending all economic activity between the U.S. and Iran. He calls it "the most effective way our nation can help to curb that nation's drive to acquire devastating weapons and its continued support for terrorism." He also asserts in the speech that Iran is seeking nuclear weapons.

August 1996: President Clinton signs into law the Iran and Libya Sanctions Act , which was introduced by Sen. Al D'Amato, R-N.Y., with the support of AIPAC. It had passed the House on a 415-0 vote and the Senate by unanimous consent. The bill imposes sanctions on foreign companies that invest more than $20 million in a year in Iran's energy sector. (A detailed history of U.S. sanctions against Iran can be found here.)

May 1997: The reformist Mohammad Khatami assumes the presidency of Iran and makes some conciliatory statements toward the U.S. in the months after his election. In the next few years, the Clinton administration slightly moderates its Iran policy (such as by easing travel restrictions), but the sanctions and basic hard-line stance remains.

November 2001: Shortly after the 9/11 attacks, the influential neonconservative scholar Eliot Cohen pens an Op-Ed in the Wall Street Journal arguing that the United States should try to engineer regime change in Iran. "The overthrow of the first theocratic revolutionary Muslim state and its replacement by a moderate or secular government, however, would be no less important a victory in this war than the annihilation of bin Laden," Cohen writes.

January 2002: President Bush declares Iran, along with Iraq and North Korea, part of the "axis of evil" in his first State of the Union address after Sept. 11.

August 2002: In a press conference at a Washington hotel, an Iranian rebel group reveals the existence of previously undisclosed Iranian nuclear facilities near the towns of Natanz and Arak. (The group, the National Council of Resistance of Iran, is categorized as a terrorist organization by the State Department.) The Bush administration seizes on and endorses the revelation, with press secretary Ari Fleischer voicing "grave concerns" in December and a flurry of news stories about the Iranian threat appearing.

November 2002: Israeli Prime Minister Ariel Sharon tells the Times (UK) that the Bush administration should turn its full attention and pressure to Iran "the day after" the invasion of Iraq ends, calling Iran "the center of world terror."

May 2003: The American Enterprise Institute in Washington holds an all-day conference, "The Future of Iran: Mullahcracy, Democracy, and the War on Terror." Among the questions posed at the event -- which is attended by prominent Iran hawks such as Michael Ledeen, Reuel Marc Gerecht, Bernard Lewis, and Sen. Sam Brownback, R-Kan. -- is: "What steps can the United States take to promote democratization and regime change in Iran?" The AEI conference is representative of myriad such events held over the last decade at right-wing think tanks, places like the Foundation for the Defense of Democracies and the Hudson Institute.

August 2005: Hard-liner Mahmoud Ahmadinejad assumes the presidency of Iran, taking over from Khatami, who is seen as more friendly to the United States.

March 2008: Then-candidate Barack Obama says that "Iran's nuclear ambitions pose a serious threat to the United States, to our ally Israel and to international security." He says he favors "aggressive diplomacy" but also keeping "all options on the table," a formulation he repeats often.

April 2008: According to a WikiLeaks cable, a top Saudi diplomat in a meeting with Gen. David Petraeus speaks about King Abdullah's "frequent exhortations to the US to attack Iran and so put an end to its nuclear weapons program. 'He told you to cut off the head of the snake,'" the diplomat says.

January 2009-present: The Obama administration imposes increasingly strict U.S. sanctions, and encourages European allies and the United Nations to do the same. At the same time, there are several halting -- and, so far, fruitless -- attempts at negotiation with Iran.

November 2009: According to a WikiLeaks cable recounting a meeting with a U.S. diplomat, King Hamad bin Isa al-Khalifa of Bahrain "argued forcefully for taking action to terminate their [Iran's] nuclear programme, by whatever means necessary. 'That programme must be stopped,' he said."

September 2010: Journalist Jeffrey Goldberg -- whose previous work in the New Yorker contributed to the drumbeat for an invasion of Iraq in 2002/3 -- pens a lengthy cover story in the Atlantic headlined "The Point of No Return." The message conveyed by Israeli officials through Goldberg is that the Obama administration must bomb nuclear sites in Iran, and if it does not, Israel will do so itself. Contributing to the sense of crisis, Goldberg reports that his sources say such an Israeli strike would more likely than not occur by July 2011.

September 2010: Over 50 House Republicans, including leaders Eric Cantor and John Boehner, sign a letter to Obama demanding that he "take whatever action necessary to prevent Iran from developing a nuclear weapon. All options should be on the table ..."

November 2010: On a visit to the United States shortly after the midterm election, Israeli Prime Minister Benjamin Netanyahu reportedly tells Joe Biden that "the only way to ensure that Iran will not go nuclear is to create a credible threat of military action against it if it doesn't cease its race for a nuclear weapon."

Meanwhile, Mideast analyst Marc Lynch predicts that, with the new Republican majority in the House, "look for another round of sanctions and some kind of Iranian Liberation Act on the horizon, regardless of how things are actually going for U.S. diplomatic efforts." That's a reference to the 1998 Iraq Liberation Act, which was signed by Bill Clinton and made regime change the official policy of the United States, laying the groundwork for the eventual invasion of Iraq.

* A version of this book exists, Trita Parsi's "Treacherous Alliance: The Secret Dealings of Israel, Iran, and the United States." There is also a useful chapter on Iran in "The Israel Lobby and U.S. Foreign Policy," from which some of the above timeline is drawn.