He pledged a "fresh start" after his summit with GOP leader. But on the Bush tax cuts, the song remains the same 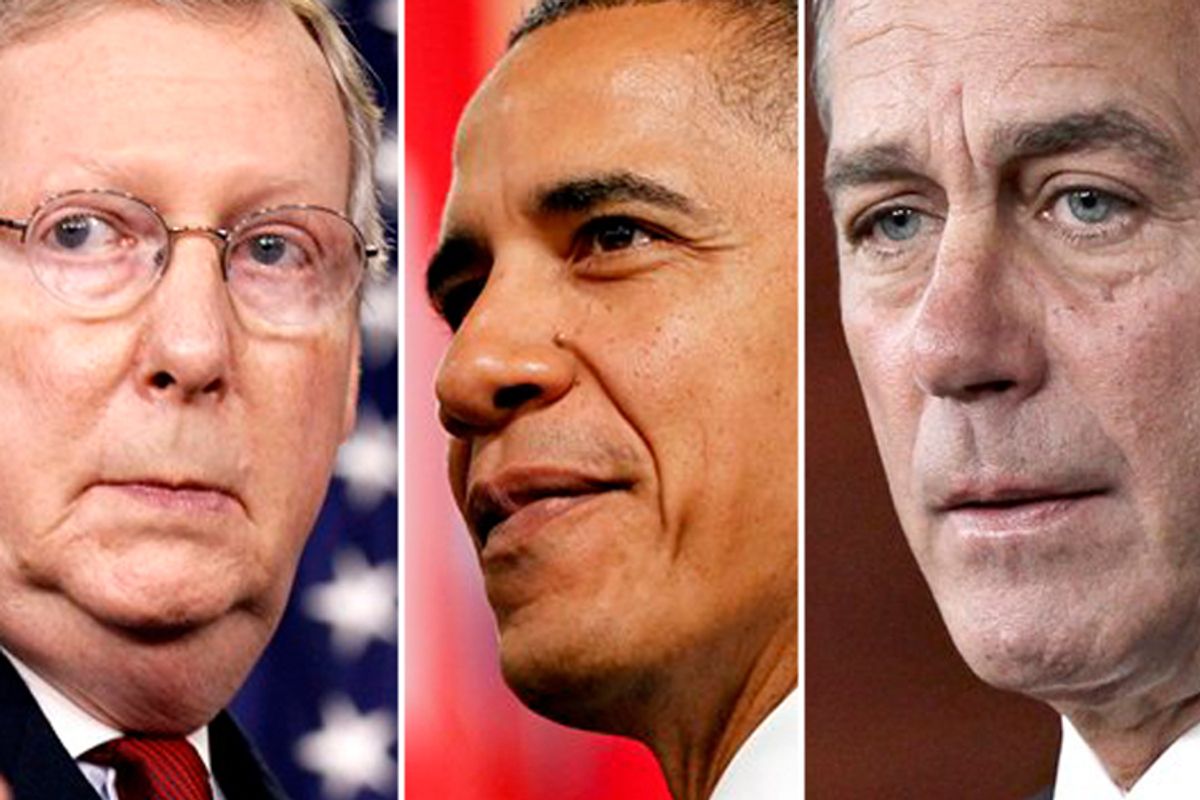 President Obama emerged from Tuesday's morning "summit meeting" with the congressional leadership of both parties and made a valiant effort to put some lipstick on a lame-duck legislative pig. He said he was happy with a "productive meeting." He called the "first chance to get together face to face since the election ... a good start as we move forward." He said that Americans "did not vote for gridlock, did not vote for unyielding partisanship" and claimed that this new effort to find common ground between Republicans and Democrats would "yield results."

He even went impressively meta, and noted that oftentimes politicians use meetings like this to make inspiring claims about bipartisanship and then immediately try to portray the other side as the villains who are unwilling to cooperate. But not this time! This time was for real!

Is there anyone left in the United States who is silly enough to take such words at face value? The results of the midterm election directly contradict the president. The party that bet all its chips on a policy of "unyielding partisanship" won big. What possible reason could there be for changing course now? Senate Majority Leader Mitch McConnell and soon-to-be Speaker of the House John Boehner have no incentive to compromise on anything -- and that most certainly includes the thorny issue of whether to extend all or merely a portion of the Bush tax cuts, a topic on which, the president conceded, the two parties are still divided by "philosophical differences."

Well, yes, the Republican position is clear -- no tax hikes for anyone, no matter how rich, and no matter how much it strains government finances! The notion that they would be any more willing to ameliorate this position after the election than they were before is absurd. Obama announced that he had appointed Treasury Secretary Tim Geithner and Budget Director Jack Lew to "to work with reps of both parties to break through the logjam," but it's very difficult to see where the White House will be able to exert any leverage in its own favor.

The president is in a weak position, but the remorseless logic of the tax cuts -- if no action is taken, all the Bush tax cuts will expire at the end of this year -- requires that the two parties come to some kind of agreement on how to move forward. So there is plenty of room for dramatic posturing -- for exactly the kind of attempts to "work the Washington spin cycle" that the president decried in his remarks to reporters. For example, Bloomberg and the Huffington Post are both reporting that Senate and House Democrats are planning to hold a "stand-alone" vote on whether to extend only the tax cuts for the middle class (currently defined as Americans earning less than $250,000 a year).

Senate Democrats are well aware that they can't get 60 on that vote. They have two goals, according to the Huffington Post. The first is to make it clear where each side stands; that is, they want to frame Republicans as holding middle-class tax cuts hostage while defending the interests of the wealthiest Americans. With that goal accomplished, the apparent hope is that Republicans will concede a "grab bag" of goodies in exchange for a deal extending all or most of the tax cuts. This grab bag supposedly includes an extension of unemployment benefits and other tax credits also due to expire.

But it's hard to see why Republicans should make any concessions at all. The public is already well aware of where Republicans stand. Before the midterm elections, there was at least the potential that the symbolism of Republicans' voting against an extension of middle-class tax cuts would take some political toll. But after the election, the Republicans have literally nothing to lose. Suppose the truly apocalyptic denouement happens -- no deal is reached, and taxes rise for everyone. Who gets the blame? The party in power, once again proving its inability to govern effectively? Or the party in opposition, claiming to defend all Americans from tax hikes?

In his remarks to reporters after the meeting, President Obama made it clear that he would "work hard to make sure that tax cuts will not go up for hardworking middle-class Americans before the end of the year." And while he declared that "permanently" extending tax cuts for the wealthy was both "unwise and unfair," his use of the word "permanent" continued to open the door to a temporary extension of all the tax cuts.

So what's the end game here? The best scenario for Democrats is to restrain Republicans from a "permanent" extension of all the Bush tax cuts while getting the fig leaf of something like an extension of unemployment benefits of return. But that's not much of a victory, and it doesn't even seem all that likely.