The anguish of quitting my hormone drugs

I went cold turkey after recent warnings about cancer. Now my doctor thinks I'm crazy -- and sometimes I do, too 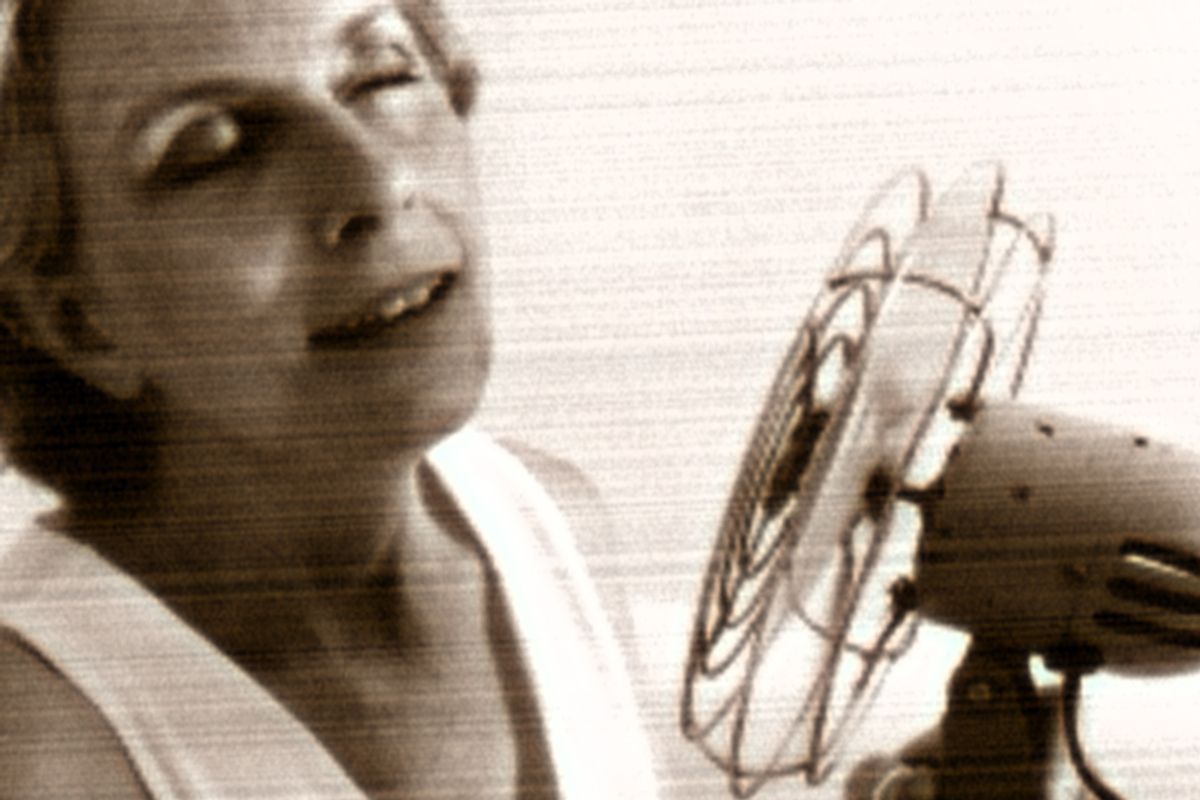 Meryl and I meet in the hall beside the garbage cans. Our faces are red and glistening. It's not because the refuse from our kitchens is heavy. It's not because we walked up the nine flights to our apartments rather than taking the elevator. It's because we both stopped -- cold turkey, as they say -- taking our hormone replacement therapy after reading an article in the New York Times. The article warned that HRT, which helps regulate and ease the erratic symptoms of menopause by supplying our bodies with an extra dose of estrogen and progesterone, may not only cause cancer, but may cause a more deadly form of cancer.

It's November in New York City -- 34 degrees outside -- and I'm wearing a tank top; Meryl's wearing a gossamer-thin cotton blouse.

"I can't stand it," Meryl says, wiping her forehead with the back of her hand.

"Lunch?" Meryl asks. "The little Japanese place around the corner? We can have tofu."

We know tofu has the same mysterious quality that estrogen has. It's supposed to trigger something in our 50-something female bodies that will control our heating systems that go haywire at unpredictable times of the day and night -- like the steam heat in our building. Part of me thinks I'm crazy to have entered the realm of hot flashes, chills, insomnia and memory loss when there is a perfectly good cure for what ails me -- and it's in my bathroom cabinet.

It is absurd that two women would voluntarily choose to suffer when modern science has become sophisticated enough to offer a medicine for nearly every ill, but maybe that's part of the problem: Modern science has become so complex that navigating our way through the attendant studies is formidable. Conflicting messages and warnings intimidate us. We don't want to mindlessly pop pills that could haunt us years later. We don't want a treatment that is worse than the ailment.

This is not the first time I've heeded controversial claims regarding HRT. Four or five years ago, when earlier warnings about HRT's risks came out, I gave up my estrogen patch and pink progesterone capsules. I'd be in front of a class of high school students when my heart would start up in a rapid beat and my face would grow red and covered with sweat. I'd grip the desk, pause, lose my train of thought, rip off my sweater. (I wore only button-up silk or cotton sweaters. Never pullovers that could yank up my tank top. Never, ever wool.) I'd pull a Kleenex from the box on my desk, wipe my forehead and neck and ball the soggy tissue in my hand, holding onto it for protection the way I might hold onto a talisman for good luck -- then I'd go on with my lesson.

Eventually, I succumbed and went back on HRT -- in order to get up at 5:30 a.m., to teach "Macbeth" and "Gatsby," to grade a hundred papers a week, to get a decent night's rest. For three years, the spontaneous combustion that happens in the pituitary gland -- that giver and taker of estrogen, that regulator of body temperature -- was controlled. Until a few weeks ago, when results from the Women's Health Initiative study provided the grim report I saw in the Times. That evening, I peeled off the patch from my lower left abdomen and stopped taking my nightly pink pill.

At Suma Sushi, Meryl and I each order entrees of tofu. We commiserate about how we shouldn't drink coffee or wine, our favorite beverages, because they're triggers for hot flashes. Two large plates arrive heaped with lightly fried squares of coagulated bean curd. We pick up our chopsticks and dig in, feeling a little self-righteous -- and a lot hopeful.

I admit I functioned better on hormones. But the recent report about cancer's link to hormone therapy is scary. I've recently lost two close friends to breast cancer and another good friend just finished a chemo regimen for ovarian cancer. No one wants to be one of the unlucky three in 500 women who use hormones and get cancer. The urge to fight that at any cost is powerful. But am I logically sorting through the facts? Am I too influenced by what I read in the papers? In 2002 when earlier results from the Women's Health Initiative came out, enough women stopped taking their HRT that cancer and death rates dramatically dropped according to a study published in February 2010, in the American Journal of Public Health. But what about studies that show hormones decrease our chances of getting Alzheimer's? (Of course, later studies showed that hormones would not decrease our risk of getting Alzheimer’s, that they might even cause dementia in older groups.) Meryl and I worry we might start forgetting, that our brains will get foggy. We swear we'll go back on hormones if that happens.

And still, I wake in the middle of the night, heat percolating to the surface like an underground spring -- flooding between my fingers, into elbows, under my arms, onto my chest, my neck, my scalp until my straightened hair curls. If you could slide your fingers over my forehead, it would feel like you were finger-painting. Sleep does not return for hours.

I call my gynecologist in the morning. "You're crazy," she says. "Go back on your hormones. You need a good night's sleep. You've only been on hormones for five years and the ones I put you on are pure, they're not the synthetic ones." But I don't want hormones; I want a homeopathic cure. "If you're not going to go back on the hormones, you can try Effexor, which is an antidepressant or Neurontin, which is a painkiller. And if you really want my homeopathic recipe, it's black cohosh, Progest cream and evening primrose -- which causes breast cancer and is an omega-6 so you have to balance it with an omega-3 like flaxseed or fish oil." While we're talking I reach for a napkin on the kitchen table to wipe my flooded forehead.

I consult a friend who once went cold turkey from his heroin addiction. "This is nothing," he says, referring to the ability of his doctor to treat me. "Bob Abramson has a DDS and an M.D. and has trained in Chinese medicine. He will know by examining a strand of hair what drugs you've been taking. He will talk to you for two hours. He will concoct herbal remedies. He will poke you with needles. He will charge a lot."

I tell him I will do anything. I want to sleep again. I want to go outside on a cold day without being chilled by sweat. I don't want to constantly need a shower.

The next morning I walk into a doctor's office that reminds me of a yoga studio: bare hardwood floors, a stone Buddha posed in the lotus position at the far end, a sign to please turn off all cellphones. For a half-hour this doctor with white hair and a kind touch asks about my health history. He holds my wrist in his hand and takes my pulse from five different points, feeling for my qi (pronounced "chee") or "energy flow." He notes that the qi in my left wrist is blocked.

"Why did you stop taking your hormones?" he asks in a mild reprimand. "If you were going to stop, you should have stopped more gradually. It might not have been as bad." He suggests, as did my gynecologist, that I shouldn't pay such heed to every study the newspaper reports, and more important, shouldn't have messed with my body's balance without consulting my doctor. "But don't go back on the hormones," he says. "Let's see what we can do."

He sticks 12 hair-fine needles into my back along my spine, several more into my wrists and my ankles (which don't hurt) and into my baby toes (which do). He tells me the names of the acupuncture points: This one's called Spirit Gate. This one Yang Pond. This one Body Pillar.

I feel ultra-calm and spacey -- the same mellow "high" I get from practicing yoga and lying in shavasana. For the next 12 hours, I do not break into a sweat and that night, I actually sleep seven hours without waking. But the night after, and the night after that, I am up at 3 a.m., my eyes tired, my body a sauna.

I remember how smug I felt on hormones -- getting a good night's sleep, staying cool and calm, suggesting HRT to others who suffered from menopausal symptoms. Now, I try to convince myself that I'm doing the right thing, that it's OK to let my body go out of whack, that it's good to be on the safe side of the divide between those who would increase their chances for horrible disease and those who would err with caution. Ultimately, what I may be doing -- even more than managing my health -- is managing my anxiety. Which of these outcomes will be the easiest to live with: ignoring health warnings and suffering needlessly down the line, or suffering now, perhaps needlessly?

A few days later, Meryl's in the hall putting newspaper in the recycling bin. I ask how she's doing.

"You want to come over for some dong quai with a hit of motherwort and a tofu salad sandwich?"

And so we endure, making choices our doctors do not advocate, giving up prescriptions for proscriptions, toasting to each other's health -- and sanity.

Beth Aviv is a writer living in New York City.