Week 6: The birthday boy's story becomes increasingly doubtful -- and things heat up between Paul and Adele 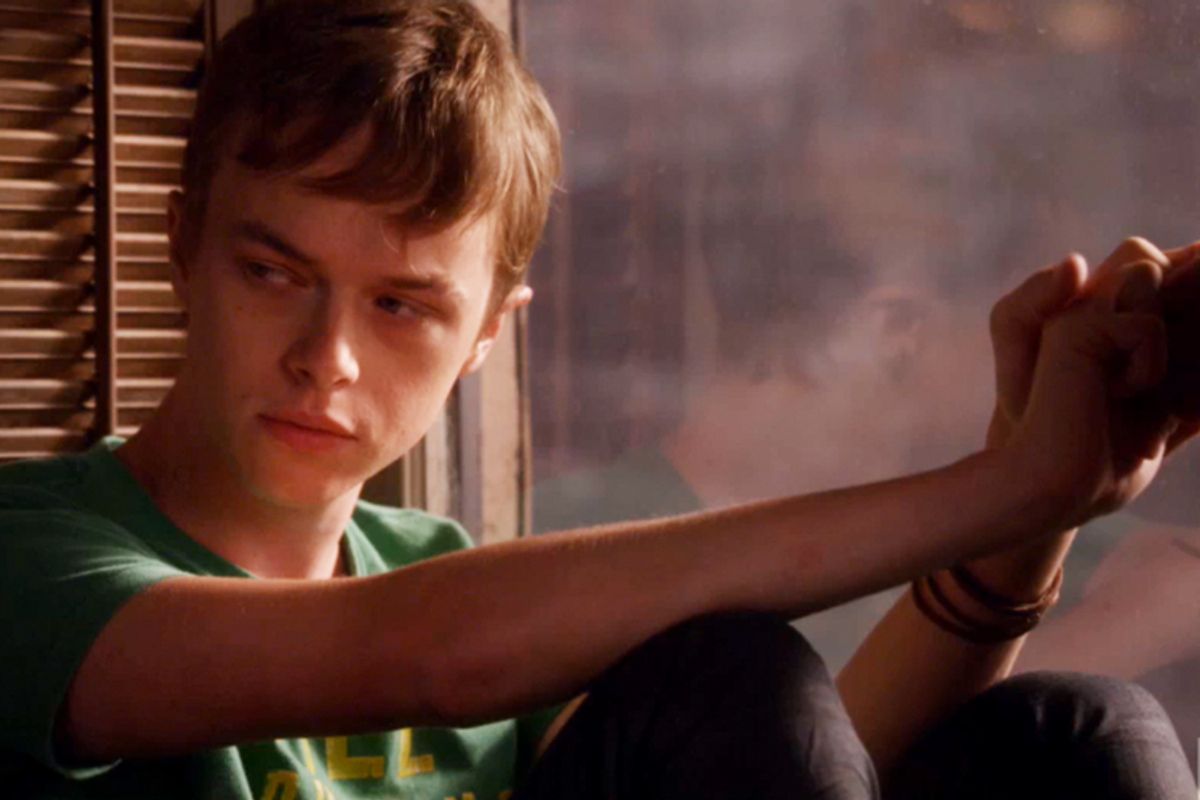 Dane DeHaan in "In Treatment"
--

It's hard to tell what's real with Jesse. He meets one of Paul's patients in the waiting room and lies to her, telling her that he's from Milwaukee, and that he's here to celebrate his birthday with his uncle Paul. In Paul's office, he sings happy birthday to himself. It's his 17th. The age of consent. He's wearing a crown and thinks it should be declared a national gay holiday.

As a commenter pointed out yesterday, it's weird that a birth mother would contact a 16-year-old adoptee on a cell phone. I've been resisting the possibility that Jesse is making this whole birth parent story up. But she's right. It is weird. How would his birth mother get that number?  It's also weird that married birth parents would go to the trouble of contacting their son only to later dump him by e-mail. Jesse has become cynical about therapy. He doesn't see the point of it. He doesn't understand what it's supposed to do for him. If it turns out he's lying, then yeah, he's in a rut, because the point of therapy is, if nothing else, is to become more honest with yourself.

What is real today, however, is Jesse's sadness. This disappointment with his birth parents, assuming they have actually contacted him, seems to have muted his usual anger and forced him to confront his feelings of abandonment. He sounds a little more mature. He asks Paul how Max is (when he left, the kitchen was on fire, which Jesse assumes Max set on purpose). He also recognizes that he shouldn't have shown up at their house.

Jesse's plan for his birthday is to ride the glass elevator alone at the Marriott. He likes the peaceful atrium. Paul has some legitimate concerns that spending his "national gay holiday" birthday alone at a hotel might not be the healthy option. Jesse invites Paul out for ice cream. But Paul seems to have developed a stronger sense of boundaries since last week. He knows that being a substitute dad for Jesse is not a healthy option either.

Jesse asks Paul again how Max is. Paul looks alarmed and very relieved that Max is now living in Baltimore. Paul insists he call Roberto and spend his birthday with his adoptive parents. Whatever difficulties they've had understanding Jesse, this couple has been a rock for him, always there, continuing to pay for therapy no matter what (yes I'm talking to you, Julia).  Renewing his relationship and respect for them does in many ways seem to be the best path for Jesse to be on right now.

But Jesse seems resistant. He has a new reparative fantasy. He will use the pictures he took of his birth brother in the wheelchair, and his whole birth parent abandonment story, and make a portfolio to apply to the Frick program. Suddenly we're back to the possibility that this is all a very effective performance piece. Next week is the last episode and we find out whether Jesse is heading in a new more self-aware direction. Or if this is the first time Paul has been unable to reach one of his younger patients.

Yesterday I confessed my fantasy that Adele was raising test tube babies with Julianne Moore, and that this would make Paul look like even more of a narcissistic goof. So when it looked as though Adele had Paul on her mind so much that she was calling him first thing in the morning, I reset my fantasy meter for an erotic-counter-transference jackpot session. And whoa, baby! Talk about penultimate episode payoff!

After some early therapy/date chit chat about Paul's psychosomatic Parkinson's, Adele starts to gently hound Paul to "take action" in his life. Therapy seems to be the one place on the planet where men fall passionately in love with women who start their relationship by nagging them to be more pro-active. Paul wants to know why it is she called him. Adele says that she's worried that she didn't give him enough time to discuss the situation with Sunil. And that she's worried because there are "young children" in the house.

Paul is a bit surprised she's worried enough to call him from her home at 7:30 in the morning. When Adele starts to dig a little for more details about this week's session with Sunil, Paul deftly turns it around to a discussion about his "fantasy." Adele looks a little disingenuous when she says, "Which fantasy is that?" The one where they discuss their difficult patients, says Paul. When Adele repeats the fantasy back to him she remembers the candlelight but adds a glass of red wine. Paul catches the slip and starts to move in for the kill. He says he just wants to know "what is happening here." Adele encourages him to keep going and tells him, softly, to "tell me what you think is happening." Then the phone rings. Adele forgot to turn the buzzer off, and when she gets up to do so, she instinctively rubs her belly in a way that makes it suddenly obvious that she's pregnant.

Paul is p-i-s-s-e-d. He doesn't want to talk about his fantasy anymore. He feels that she's deliberately set him up for humiliation. He accuses Adele of being a "Freudian ice queen" who has been deliberately egging him on for her own narcissistic gratification. He imagines that Adele is in a  "happy relationship with a grown family." We know this isn't true, since there's no way a grown family is living in Adele's sparse apartment, and her bed seems a little small for her and a partner. But we now have an alternative explanation for why she was calling Paul so early in the morning. Maybe she was having one of those pregnant woman intuition dreams.

I'm still not convinced Sunil is dangerous to Julia, and Paul has some legitimate concerns that, unfortunately, Adele doesn't give him a chance to explore, now that she's the protector of young children. Whatever Paul's flaws, he does have 20 years of experience, so there is reason to trust his instincts. But Paul has, mysteriously, never broached the possibility that Sunil might be experiencing suicidal feelings. The first thing Sunil ever said to Paul was a carefully rehearsed story about a man in his parents' village who hung himself with a feces-smeared sari. Back then Sunil insisted he wasn't crazy like that, which in therapy talk usually means he's crazy like that.

Unlike Adele, I respect Paul's gut decisions. But I'm worried he might be in denial about the reason why he's so desperate to protect their therapeutic bond: that he has a blind spot when it comes to suicide because of his mother. Every season Paul has almost lost a patient to suicide. And there's good reason to believe that he lost Alex, even if the case was thrown out of court. If Adele knew more about Paul, I wonder if she might realize that this is where his negligence usually lies.

Paul accuses Adele of taking Julia's side, which is ironic since that's pretty much what Paul has done since Week One. But Adele's not pleased that Sunil has handed Paul a "weapon," the menacing cricket bat. Or that Paul is doing nothing about it. She makes a pretty strong case for the possibility that Paul may be sabotaging his own career by allowing a potentially dangerous situation to explode. Maybe she's right. But maybe she's falling into the Gina trap of seeing Paul as an incompetent.

His confidence shaken, Paul goes home and calls Julia. This I hope will come as a relief for viewers who believe that Julia is at risk. In the best-case scenario she is safe and Sunil will have made enough progress to understand why Paul did what he did. Hopefully Paul will have handled this in a way that won't damage their trust. But if Sunil shows up in the Hudson with rocks in his pockets, this plot development didn't come from left field. That possibility was always obvious.   In the meantime, as a distraction during the  very long week until the finale, I am now taking bets on which kind of creature Dane DeHaan will play in "True Blood."  I think we can safely rule out werewolf. This leaves fairy, warlock, vampire, or were-panther/methhead. He's such an impressively versatile young actor this is a true crapshoot.