How can America's smartest banker be so dumb?

The New York Times tells us, again, that JP Morgan CEO Jamie Dimon feels "bullied." He needs to get out more 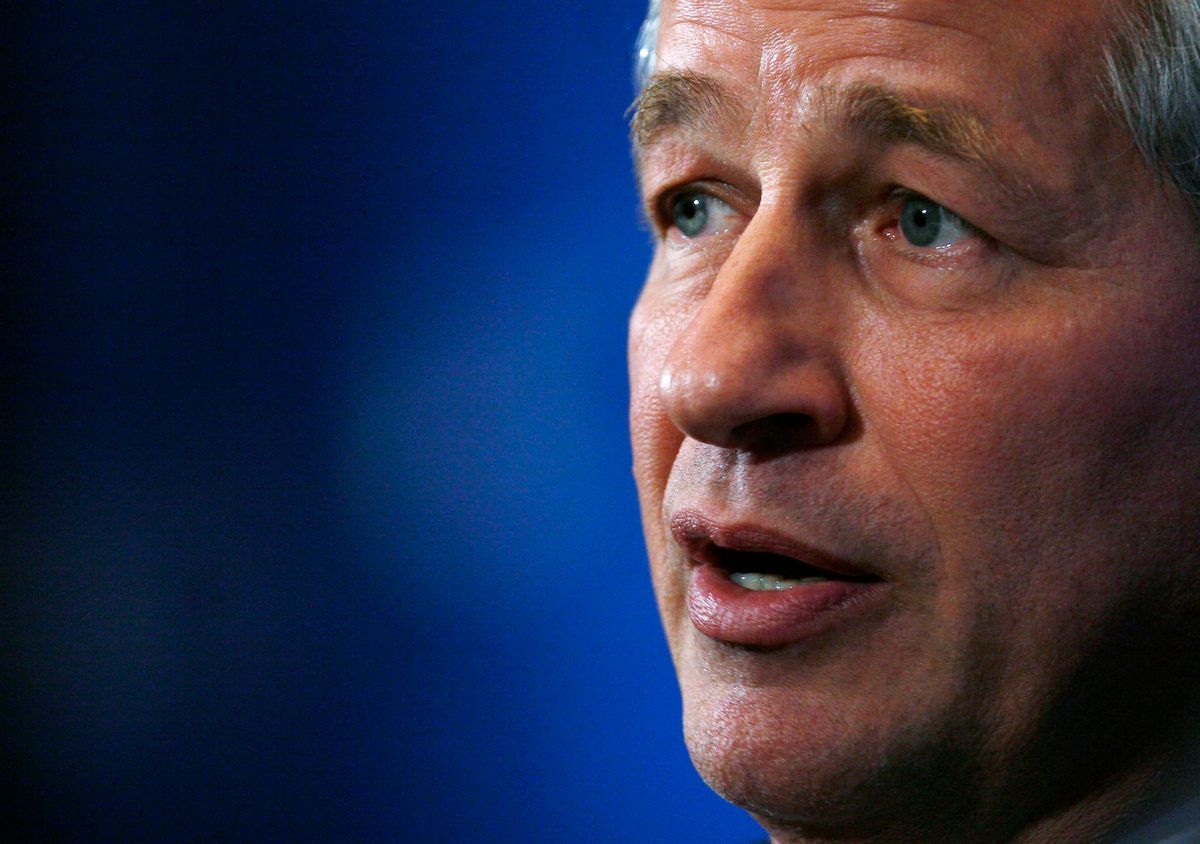 If I were Jamie Dimon, CEO of JP Morgan Chase, I'm not sure what I would think of the headline placed on Roger Lowenstein's endless Sunday New York Times Magazine profile, "America's Least-Hated Banker." Talk about damning with faint praise! How should we read that? The best thing we can say about Jamie Dimon is that he is not reviled as much as the rest of the "fat-cat banksters" that ran wild on Wall Street and crashed the economy?

Though, really, the question is begged: Least-hated by whom? I don't think the general public makes the same fine distinctions in this arena as do business journalists, who, like Lowenstein, routinely laud Dimon for his smarts and for his ability to manage risk while others lose their shirts. Jamie Dimon is clearly better at this job than other Wall Street CEOs, but that still puts him squarely in the middle of a class that is fundamentally unpopular.

The funny thing is, you'd think a smart guy like Dimon would be, well, smarter, about the way the country works. Lowenstein tells us that Dimon was a big supporter of Obama but ended up turning against him after becoming upset at the personal insults that started coming his way from the White House.

The day before, "60 Minutes" broadcast an interview with Obama in which he referred derisively to "fat cat" bankers. To Dimon, who earned $16 million for 2009 -- all but $1 million of it in long-term stock incentives -- the slap was the sort of broad-brush slur he was hearing too much of on all sides. He reminded the president: "President Lincoln could have denigrated all Southerners. He didn't."

... Judy Dimon says the crisis took a toll on him. He used to stand up to bullies who threatened his smaller twin; now he felt as if he, and bankers in general, were being bullied.

Wow. I thought CEOs were made of tougher stuff. Pretty much everybody who pays at least passing attention to politics knows exactly why Obama made that comment. His administration was perceived, for very good reasons, as being too lenient on Wall Street, and he was trying to rally some political support. If you supported Obama's larger agenda, which Dimon apparently did, you might be expected to shrug off the name-calling. That's politics. But, instead, Dimon felt bullied. That's the sign of a thin-skinned man who doesn't have his priorities straight.

There are other paradoxes in the article. At one point, Dimon defends the bigness of banks and praises economies of scale, and yet at another, he concedes that the bigness of the system made it hard to evaluate risk at the most basic level.

Dimon ruefully observed that the optimal way to deal with delinquent loans would be to evaluate customers one at a time -- the way the bygone corner banker did when a borrower got sick or lost his job. Of course, corner banks disappeared when conglomerateurs like Dimon acquired them. But it's important to remember that the mass production of mortgages was welcomed early in the decade, because it allowed more people to get credit. Society wants banks to make loans, only not with such improvidence that large numbers of borrowers end up defaulting. There is, again, a tension between these goals; and when mortgage shops were converted to factories, banks lost sight of how to manage it. "This is way beyond the capacity of the machine," Dimon admitted.

This is not a minor point. One of the earliest, and sharpest, criticisms of the rise of securitization and such neat tools as credit derivatives was that their deployment progressively divorced the ownership of risk from the people most qualified to judge risk. Banks didn't care about the credit-worthiness of mortgages because they bundled up those mortgages and sold them off to someone else, and those sellers didn't care about the risk, because they bought credit swaps that insured them against default, and so on and so on.

It is to Dimon's credit that JP Morgan avoided the most egregious sins of its competitors, but that shouldn't make any of us sleep any better while wondering when the next outbreak of insanity and greed will swamp us all. Because he's the exception, not the rule, and even he doesn't seem to get quite how badly those of us who did not pull down $1 million in 2009 got hurt by Wall Street's application of economies of scale to the mortgage industry. He feels bruised? The rest of us are battered and beaten to a pulp.