Four ways that Dick Lugar can fight off the Tea Party

They want to make him the next Mike Castle in 2012. How can he stop them? 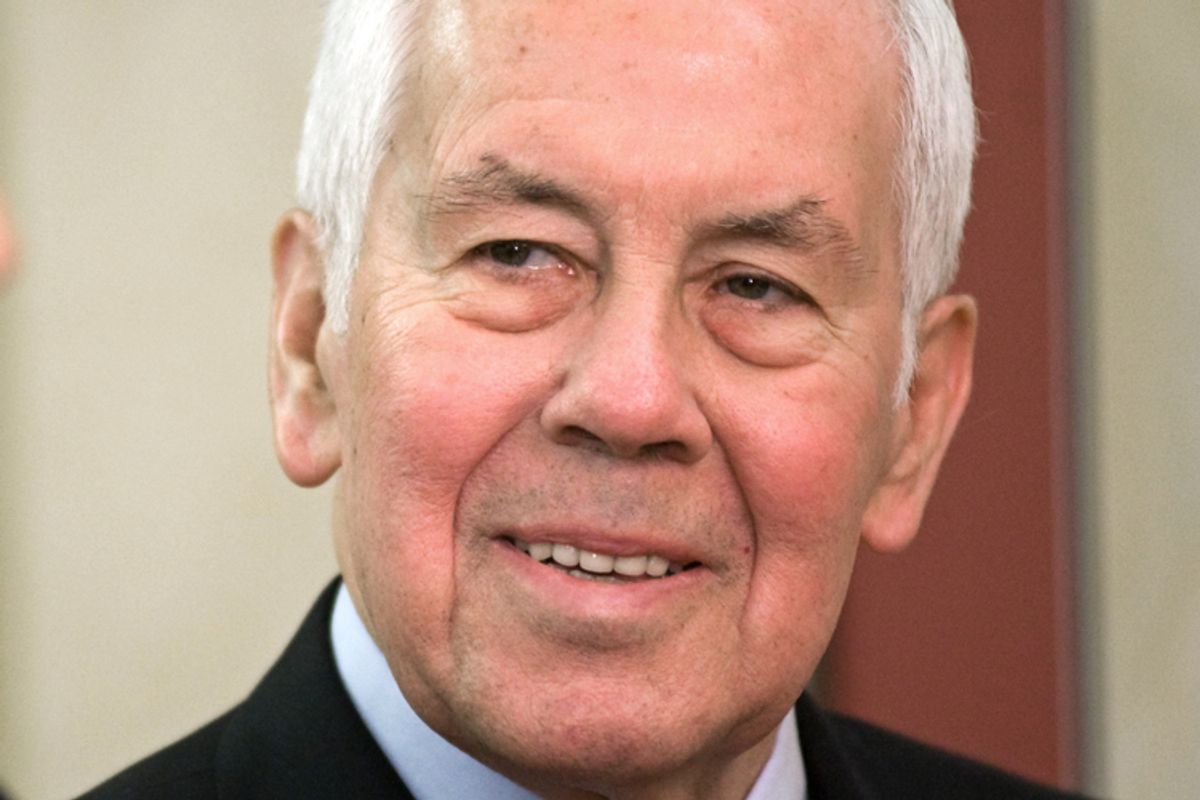 It shouldn't come as much of a surprise, but the Indianapolis Star reported this week that Tea Party activists in Indiana are planning to meet in early January in an effort to identify and unite around a candidate to challenge Richard Lugar in the 2012 Republican primary.

At the moment, Lugar is the Republican whom virtually every Democrat in Washington -- Barack Obama included -- mentions when making the case for bipartisan support for Obama's START treaty with Russia. Lugar calls the nuclear treaty "a basic reason I am running for re-election," which goes a long way toward explaining why the Tea Party -- also known as the Republican Party base -- is out for blood. But it's not the only reason. Per the Star:

But dissatisfaction -- and even downright anger -- has been building among some conservatives. They watched in dismay earlier this year when Lugar voted to confirm liberal Supreme Court Justice Elena Kagan. This month, they were at odds with Lugar when he defended congressional earmarks; backed a bill to help some illegal immigrants who came here as children earn a path to citizenship; and stood shoulder-to-shoulder with Secretary of State Hillary Rodham Clinton to push for a new nuclear treaty with Russia.

"He's bombarded us" in the past couple of weeks with reasons to oust him, said Diane Hubbard, an Indianapolis Tea Party organizer who was among 65 people who protested Lugar's co-sponsorship of the immigration bill -- called the DREAM Act -- outside his Indianapolis office Saturday.

It's also worth remembering that Lugar's name was connected with Obama's vice-presidential search back in the summer of 2008. Who knows if either man was actually interested in teaming up with the other? But the fact that an Obama-Lugar pairing wasn't entirely implausible  demonstrates why Tea Partiers, who demand complete and unyielding opposition to the "Obama agenda," don't trust the 78-year-old Republican.

It's tempting to say that Lugar doesn't have much to worry about. His popularity remains broad, he'll have plenty of money, he's already begun preparing for a challenge, and it's unlikely that the Tea Partiers will recruit a big name to oppose him. Plus, he's stood for reelection five times since winning his seat in 1976, and never before has he even been opposed in a GOP primary -- even though he's done plenty of across-the-aisle work in his 34 years in Washington.

But in none of Lugar's previous reelection campaigns was the Republican Party base in the restive mood that it's in today -- and that it will almost certainly be in a year from now. As I've noted before, the last time the GOP base was in revolt against the party establishment like it is now was back in the late 1970s -- the 1978 and 1980 election cycles, to be precise. In those two years, several unknown and underfunded candidates bested (or nearly bested) well-known, well-funded establishment figures in statewide GOP Senate primaries; think Jeffrey Bell knocking off Clifford Case, or Al D'Amato taking out Jacob Javits.

So how can Lugar survive? Here are four possibilities:

1) The climate changes: It's no coincidence that Lugar has never faced a Republican primary challenge -- even from a gadfly -- before. Conservatives weren't warring with the GOP establishment in 1982, 1988, 1994, 2000 and 2006, his previous reelection years. Had one of the conservatives now mentioned as a potential '12 challenger (state Sen. Mike Delph and state Treasurer Richard Mourdock) run against Lugar in, say, a 2000-like climate, it would have risen only to the level of nuisance challenge. So if the GOP base's energy dies down in the next year and returns to a more typical level, Lugar will be fine. But it's hard to see why this would suddenly happen.

2) The Tea Party fails to unite: One of the anti-Lugar activists quoted in the Star story notes the importance of avoiding "another Coats situation" -- a reference to establishment Republican Dan Coats' underwhelming (39 percent of the vote) victory in this May's Senate primary. Coats lucked out because two candidates with solid conservative credentials, Marlin Stutzman and John Hostettler, split the Tea Party vote. A similar dynamic would do wonders for Lugar, but again, it's hard to see it happening; Tea Partiers probably learned their lesson this year.

3) The Tea Party picks the wrong challenger: Christine O'Donnell, Sharron Angle and Joe Miller all demonstrated this year that, in a climate like this, conservative Republicans are willing to vote for just about anyone who is running against a perceived RINO. But J.D. Hayworth's disastrous campaign in Arizona demonstrated that they still have their limits. Hayworth was undermined by a series of crippling blunders and revelations, which made him seem slick and untrustworthy. The man he was challenging, meanwhile, John McCain, moved sharply to the right, making it easier for Tea Partiers to check his name off, however grudgingly. Lugar, as his START and DREAM Act postures show, isn't interested in replicating McCain's strategy. But he still might luck out and draw a Hayworth-ish foe in his primary.

4) Run as an independent: Generally, independent candidacies are doomed missions. But Lugar has unusually broad and deep popularity in Indiana. If he were to run as an independent, with the GOP nominating a fringe-ish ideologue, Lugar would conceivably have a decent chance of winning. His situation is somewhat similar to that of another moderate Republican facing a likely primary challenge in 2012, Olympia Snowe. Snowe's Maine is smaller and historically more independent-friendly than Indiana, but her basic popularity profile -- stratospheric numbers with general election voters and a big problem with the base of the Republican Party -- is just like Lugar's.