Julian Assange says his next big target is a big bank. Isn't that the kind of transparency the market craves? 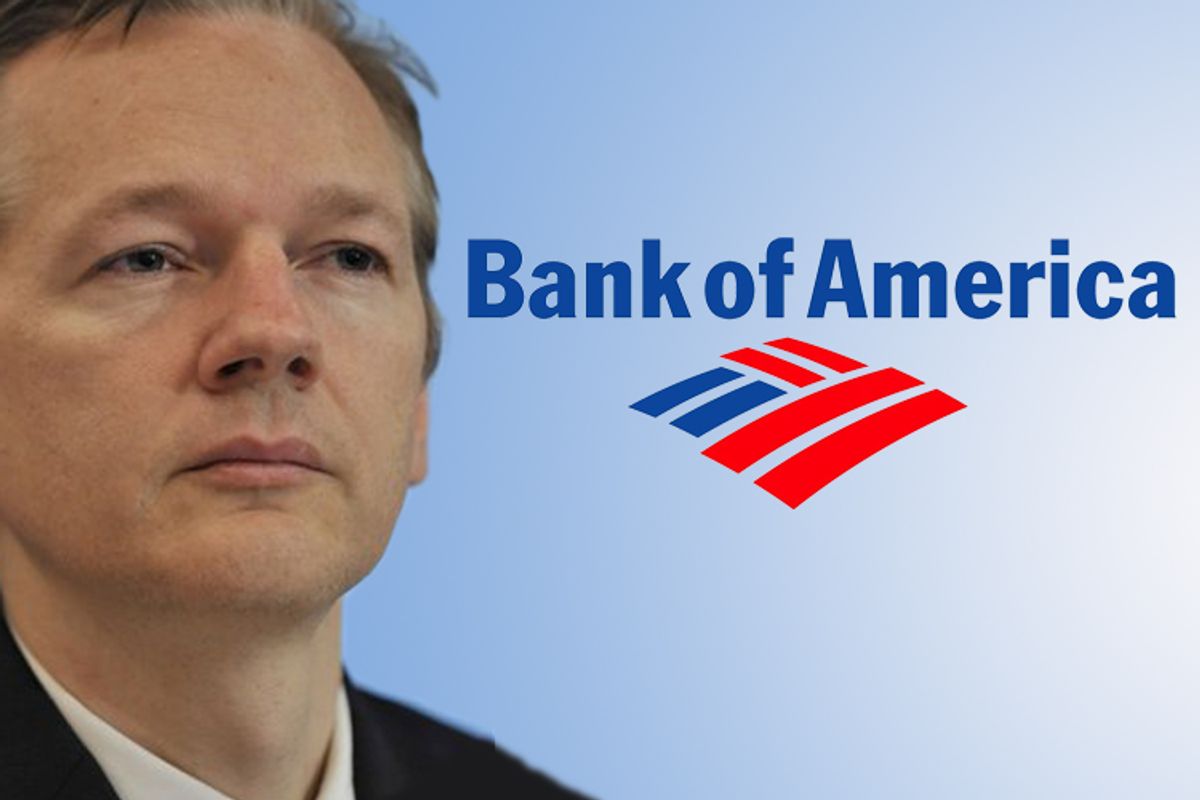 Forbes magazine is making a very big deal of a declaration by WikiLeaks maestro Julian Assange that sometime early next year, "a major American bank will suddenly find itself turned inside out."

"You could call it the ecosystem of corruption," he says, refusing to characterize the coming release in more detail. "But it's also all the regular decision making that turns a blind eye to and supports unethical practices: the oversight that's not done, the priorities of executives, how they think they're fulfilling their own self-interest."

Strangely, despite devoting thousands of words to a blossoming war between the technologists seeking to provide the private sector with leak-proof security systems and the information-wants-to-be-free revolutionaries personified by Assange, reporter Andy Greenberg's original story had two big holes. First, he missed Assange's assertion last year, published by ComputerWorld, that he was sitting on five gigabytes of data liberated from Bank of America, which puts that institution at the top of the list of likely exposure suspects. But more important, Greenberg doesn't devote much attention to what a world in which big corporations cannot keep the lid on their internal communications and deliberations sealed would look like.

There seems little doubt that that world is coming. Whatever you think of the ethics or legality of such involuntary disclosure, or regard Assange as a noble whistle-blower or rank terrorist, there's no getting around how easy it is to dump vast amounts of information into the public domain in the era of portable hard drives and ubiquitous Net access. From the dawn of the computer age, information has become ever harder to control, and there's no sign of that changing any time soon. Quite the contrary, as proven by the current flurry of WikiLeaks diplomatic cables released.

But what will it mean, practically speaking? Ideally, greater transparency is supposed to improve market efficiency. So if, say, a data dump on a big bank revealed the corruption at the heart of that institution's operations, it would be punished by the market, perhaps to the point of going out of business. In the interview with Forbes, Assange goes so far as to assert that "one or two" big banks may collapse as a result of WikiLeaks revelations.

Could Julian Assange achieve what a global financial meltdown failed to accomplish? Perhaps, if the information is fresh enough and reveals financial problems previously unknown. Or maybe there will be juicy material that gets plugged immediately into the proliferating investor lawsuits raking over dubious securities trade of the last decade.

But that's all after the fact. The more interesting question is to wonder whether the threat or certainty of eventual exposure has any kind of prophylactic effect on behavior. For example, would the financial crisis have played out any differently if we could have read every e-mail or text written by Bear Stearns or Lehman Brothers or Merrill Lynch mortgage bond traders during the hot and heavy days of the housing boom?

Again, doubtful. When you drill down on the individual stories of the companies at the heart of the madness, it becomes pretty clear that most of the executives of those firms didn't really know what was going on -- and presumably they had access to whatever information they wanted. When the incentives are in place to take big risks in pursuit of oversize profits, that's what people will do. Certainly, there doesn't seem to be any chance at all that they will be shamed into better behavior by public scrutiny.

Whistle-blowing can be effective at exposing outright criminal behavior or war crime atrocity, but curing Wall Street of stupidity committed in the quest for profit might be asking a little too much.