Too little, too late, too useless: The House tax cut vote

Nancy Pelosi gets her way, but Republicans fail to be embarrassed by "chicken crap" maneuvering 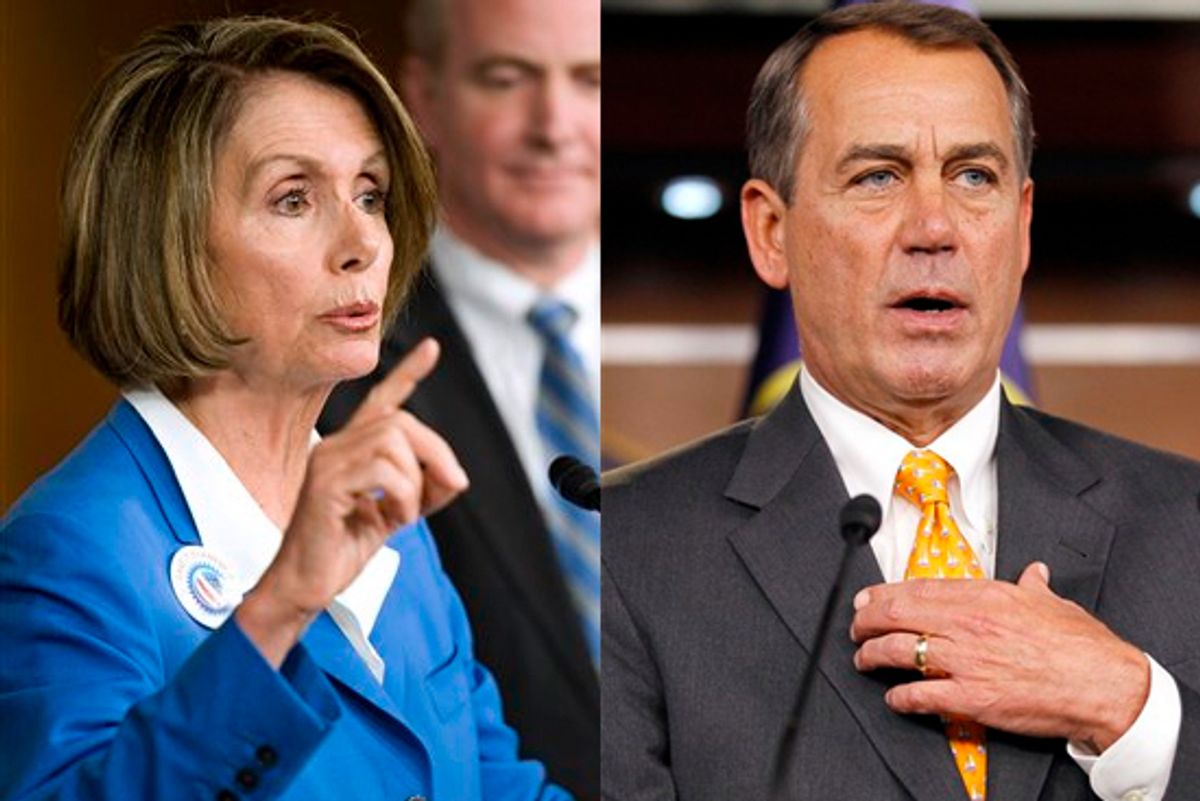 The tax cut travesty rolls on. Moments ago, the House of Representatives voted to extend the Bush tax cuts -- but only for the middle class. The measure passed 234-188, because in this lame duck legislative session, House Speaker Nancy Pelosi still has the votes to enact her will. But only 3 Republicans voted for the measure. (20 Democrats voted against it.) If the goal was to embarrass the naysayers for their desire to make sure the wealthiest Americans are protected from higher taxes, well, it didn't work. Even Democrats who have already lost their seats -- and thus theoretically at least have nothing left to lose -- voted against the extension.

House Minority Leader John Boehner called the vote "chicken crap" -- and he's right. There's no chance that Senate Democrats will rally 60 votes to pass their own corresponding middle class extension. There's no chance that the vote will influence the negotiations currently under way between the White House and a handful of Congressional leaders. The time when such political theater could make a difference is long past. Republicans have all the leverage they need to get all the tax cuts extended.

Numerous media reports suggest the White House is still hoping to cut a deal that delivers a tax hike limited to millionaires only, or an extension on unemployment benefits, some kind of pro-job growth measure, or perhaps a commitment to ratify the New START treaty. But it's still very difficult to see why Republicans would agree to anything they don't want. The only threat in the White House's arsenal is a presidential commitment to veto anything that comes out of Congress that doesn't include some Democratic priorities. But we have yet to see Obama play that kind of hardball.

But why not? The Democrats seem terrified at the prospect that they will get blamed for a middle-class tax hike, if no action is taken and all the Bush tax cuts expire. But Democrats, and the White House, have been digging heir own grave by failing to match Republican tactics with their own brand of take-no-prisoners legislative strategy. It shouldn't be hard for Obama to articulate exactly why he would feel forced to veto an across-the-board extension. Extending tax cuts for the wealthy is unpopular, bad for the deficit, and likely to have a negligible effect on the economy. Obama made that case for months before the election -- but he's not going to make any further headway on his agenda if he doesn't show some backbone.

But don't hold your breath. The conventional wisdom is that some kind of deal extending all the cuts will be announced late this weekend or possibly Monday. The only uncertainty is the size of the fig leaf obtained by the White House to attempt to cover up its dismal failure.