The lie I couldn't stop telling

In middle school, I invented an elaborate fiction about my childhood in Hawaii. One problem: Everyone believed it 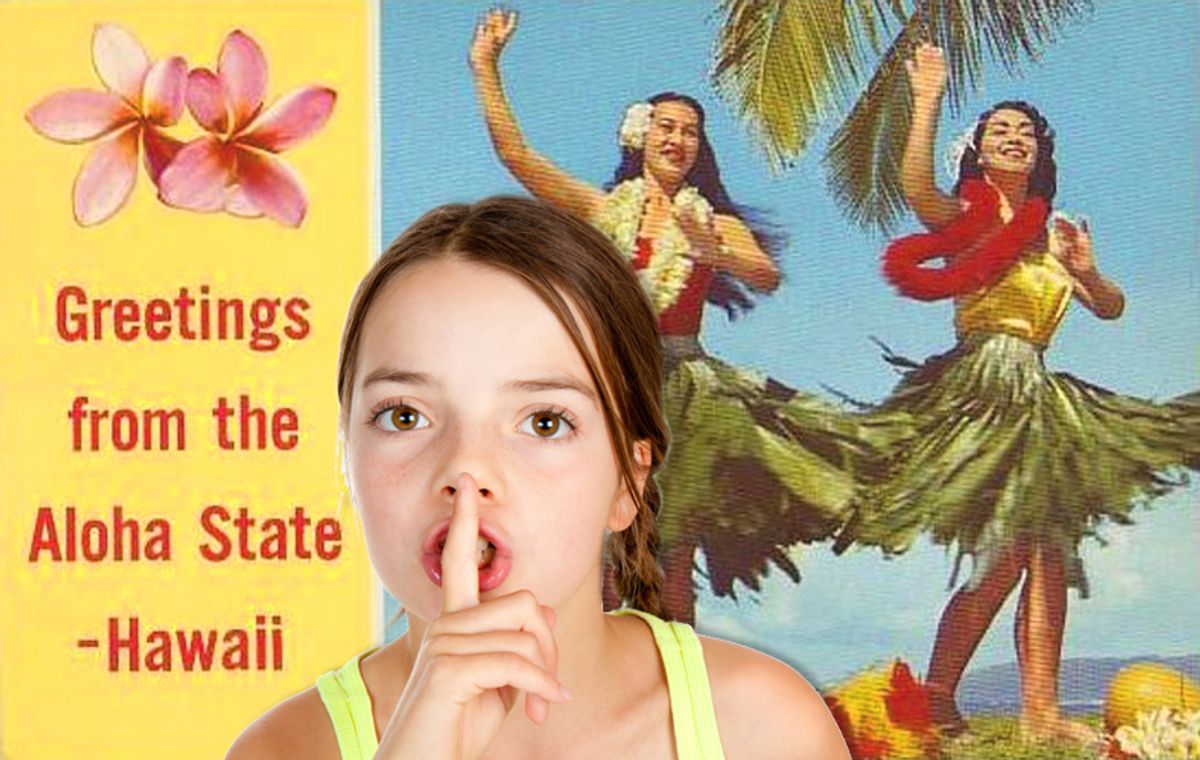 Zsa Zsa Gabor started it. After I woke up from a nightmare, my father let me sit on the couch with him while he watched "The Tonight Show With Johnny Carson." Zsa Zsa was the guest and every man seemed to be in love with her. Even my father. She tilted her head toward Johnny and said, "My secret to keeping my husband happy? I make myself interesting, darling." Johnny almost fell out of his chair. My brain sucked up those words and held them. "Interesting" became my theme. It still is.

In our small city, we had one large public junior high school. The year I started I was in classes with all new kids. Our first English assignment was to write a two-page essay of our life story. And there was nothing about me that was interesting other than my imagination. So I created a new life.

I was born in Hawaii, lived in a hut and got a surfboard for my 11th birthday from my oldest brother Michael. There was a tropical storm that day, and though everyone warned me not to go out, I did.  I had the ride of my life but lost my board. Michael, the strongest and best swimmer on the island, went out after it and was never seen again. Heartbroken, my parents left Hawaii and came to live on the Mainland, in this town, far away from the ocean who took their oldest and most cherished son. They never went back. But sometimes I would go with my uncle who was a pilot and delivered supplies to the natives.

I thought the teacher would probably know I made this up. I didn't think she taught my older brothers, but I hadn't paid close attention. If she questioned it, I'd say I misunderstood the assignment and thought it was supposed to be fiction. If she believed it, no harm done. It would be our secret. Either way I knew I would get an "A." It was that good.

The next day the teacher announced there was one story so fascinating she had to read it aloud. She glanced at me and smiled as she began to read my essay. I was stunned. But I was also pleased. Her voice shook slightly when she read about the brother who disappeared with the tide. When she revealed the author, everyone turned to stare at me.

If I was going to confess, that was the moment to do it. But there was too little time to consider the ramifications. These students, who were still strangers to me, would be my classmates for the next six years. I didn't think about how much I would have to remember and conceal. All I knew is that, in that moment, they looked at me and saw someone interesting.

When class ended they crowded around and asked questions about Hawaii and what their name was in Hawaiian. I was glad no one had gone there on vacation. Fortunately, what little I knew was more than they did. I made up exotic names for each of them. The next day they asked again and I had to remember what I told them the day before.

A few weeks later a classmate asked when my uncle would take me to Hawaii again and I told her soon. That weekend I caught the flu and didn't return to school for almost a week. When I came back the teacher said, "So, we heard you went to Hawaii. Come up and tell us about it. Now."

I was not prepared. I walked to the front and hoped for a fire drill. I hoped for someone to throw up. Instead I heard myself effortlessly describe my unexpected vacation. My uncle picked me up at the local airport and we flew for hours. When there weren't mountains he let me take over. Due to the bad storms, he was running a little behind so instead of landing he flew low and close to my island. I jumped out of the plane into the water and my friends paddled out in the canoe to pick me up. They had a big party (the word luau didn't come to me) and we slept on the beach.  Someone asked why I wasn't tan. I said it rained. That's how I got the cold. And then I coughed.

A girl in the class wanted to be friends with me. Audrey was smart and funny and interesting. She lived in a funeral home. She rarely invited people because they were either scared or mocking. Since I was worldlier than the rest, she thought I would be different. She trusted me. I went to her house several times, so my mother said I had to invite her to mine. Before Audrey came, I hid family photo albums and decorated my room with a subtle Hawaiian theme. I kept her away from my brothers and begged her not to mention Hawaii or "Michael" to my mother because it would make her cry. Living in a funeral home, she understood.

I got tired of talking about Hawaii. In addition to homework, I had to research Hawaiian history and geography to answer questions. And I was frightened. I ran through disaster scenarios of what would happen when someone found out. I saw the rumor spread from one person to another and one by one they walked past me at my locker to laugh or yell or spit. I spent hours trying to figure out how I could get out of this.

Even though I figured God might be mad at me for this, I prayed none of my classmates would become friends with my old grade school friends or talk to my brother who was a ninth grader at the same school. He was an Eagle Scout and refused to lie for me. I promised God if He did this for me I would quit lying.

The school year ended and no one found out. I hid out during the summer break and hoped some type of amnesia would set in and the kids would forget about Hawaii. When school started up again, I confided in a girl who I knew would tell everyone that my uncle's plane had crashed so there would be no more trips.  If anyone mentioned Hawaii, I looked sad and changed the subject. Sometimes I even managed to make my eyes water. I dropped the friendship with Audrey. I knew she would eventually find out that she couldn't trust me. I hoped she didn't think it was because she lived in a funeral home.

Despite my promise to God, that hellish year didn't stop me. It just made me more careful. In the years that followed I made elaborate prank phone calls and assumed different personalities for every class in high school. In English lit I was sweet and quiet. And loud and obnoxious in European history. I played "smart," "troubled," "rebellious" and "flaky." During the summer I worked as a waitress and often put on foreign accents. I made better tips when I did, especially with male customers who would make sexual jokes they thought I didn't understand and laugh with wild-eyed looks when I "fell" for them.

I knew it was wrong and tried to stop. Every time I met someone new I promised myself to be honest with this one. But sooner or later we would hit a dull spot, and I would feel the urge to tell just one story. And one story led to many more, and then I would have to make my exit.

My freshman year of college, I met the man I knew would become my husband. Only then did I force myself to be honest. In the beginning, stories popped out automatically. Before he could react I told him I made it up. It happened enough times I needed to explain. I told him about my lies, what I learned and how I wanted to be now. And that's when I discovered telling the truth without flinching makes you far more interesting than any lie.