When Mitt Romney pulled a Palin

On "The Tonight Show," the ex-governor claims quitting isn't his style. Tell that to the people of Massachusetts 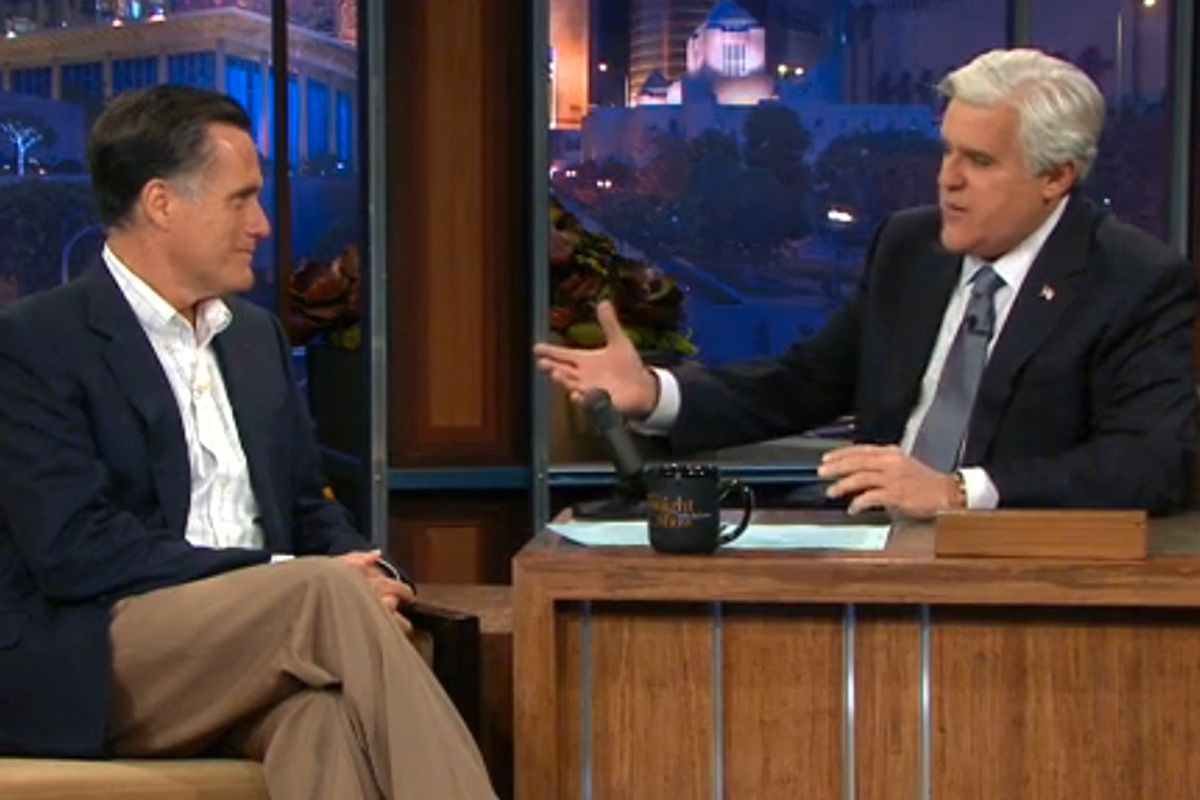 Whether Romney believes that any of these words actually apply to Palin is impossible to know. He rattled them off with a smile and with no hesitation or hint of sarcasm and seemed entirely sincere. But few in politics are as good at faking sincerity as Romney. He was, don’t forget, just as convincing when he pledged in his first Senate campaign in Massachusetts that he would do more to advance the cause of gay rights than Ted Kennedy. And yet there he was on Leno's couch Wednesday night, matter-of-factly asserting that the "don't ask, don't tell" policy is working and that it would be a grave mistake to tinker with it in a time of war.

This is hardly a new critique of Romney, but if his latest "Tonight Show" appearance drives one reality home, it's that watching the former governor run for president will never cease to be a maddening exercise -- at least for anyone who knows anything about the leader Romney purported to be back in his Massachusetts days.

For instance, Leno also pointed out that Palin had taken some heat for leaving her job as Alaska's governor midway through her term. You were a governor too, he pointed out to his guest. Could you ever see yourself skipping out like that?

"No, it's hard to imagine the circumstances where I’d quit. I loved being governor," he said, noting that the post allowed him to "improve schools" and "get healthcare for folks."

Funny, that's not how it seemed for the second half of Romney's single term in the Massachusetts State House. Like in all non-leap years, there were 365 days in 2006, Romney's final year in office. He spent 212 of them out of the state, racking up more than 200,000 miles in the air and traveling to nearly 40 other states to lay the groundwork for his 2008 White House campaign. He kept the title of governor, sure, but ask just about anyone in the Bay State and they'll tell you: He walked out on the job. He quit -- just like Palin.

"He got his grade in November when they went to the polls and overwhelmingly said that his agenda is not their agenda," he said.

Funny that Romney should mention humbling midterm elections. He had one of his own back in Massachusetts.

To fully understand the humiliation that the 2004 elections represented for Romney, some background is required. Massachusetts is, obviously, an overwhelmingly Democratic state. When Romney was elected in 2002, only 22 of the 160 seats in the state House of Representatives were held by Republicans. In the Senate, the GOP owned only seven out of 40 seats. This imbalance had much to do with Romney's victory: He sold himself as a socially moderate good government reformer -- a commonsense check on the state government monopoly that Democrats otherwise enjoyed.

In office, Romney dedicated himself to building a viable Republican Party in the state -- and to increasing the GOP's presence on Beacon Hill. He invested and raised $3 million to fund what was the most massive Republican push in decades for the 2004 state legislative elections. A record number of GOP candidates were recruited, trained and funded. They ran as Romney Republicans -- reformers equally dedicated to the governor's Weld-ish mix of cultural moderation and fiscal conservatism. This was supposed to be Romney's springboard to the national stage: He'd use the momentum from '04 to advance his agenda and win reelection in 2006, then use that success story to seek the presidency in 2008.

But on Election Day '04, the unthinkable happened: Somehow, the Republicans lost seats -- two in each chamber. "It was," the Boston Globe wrote, "a stunning defeat for Romney, who personally recruited many of the GOP candidates as he positions himself for a potential White House run."

That's about the moment when Romney gave up on Massachusetts. He disengaged as governor, switched his position on abortion, ratcheted up his opposition to gay marriage (which the Massachusetts Supreme Court had just legalized), and ramped up his out of state travel, ridiculing his home state to Republican crowds across the country. Running for reelection in 2006 was out of the question. His polls numbers were dropping (by October '06, his favorable rating was barely above 30 percent), with voters expressing regret at having elected him in the first place.

In January 2007, two months after his lieutenant governor was throttled in the race to succeed him (the worst showing for a GOP gubernatorial candidate in Massachusetts in 20 years), Romney officially left office. In reality, though, he'd quit long before then -- just as Palin would do in Alaska a few years later. At least she had the decency to be upfront about it.