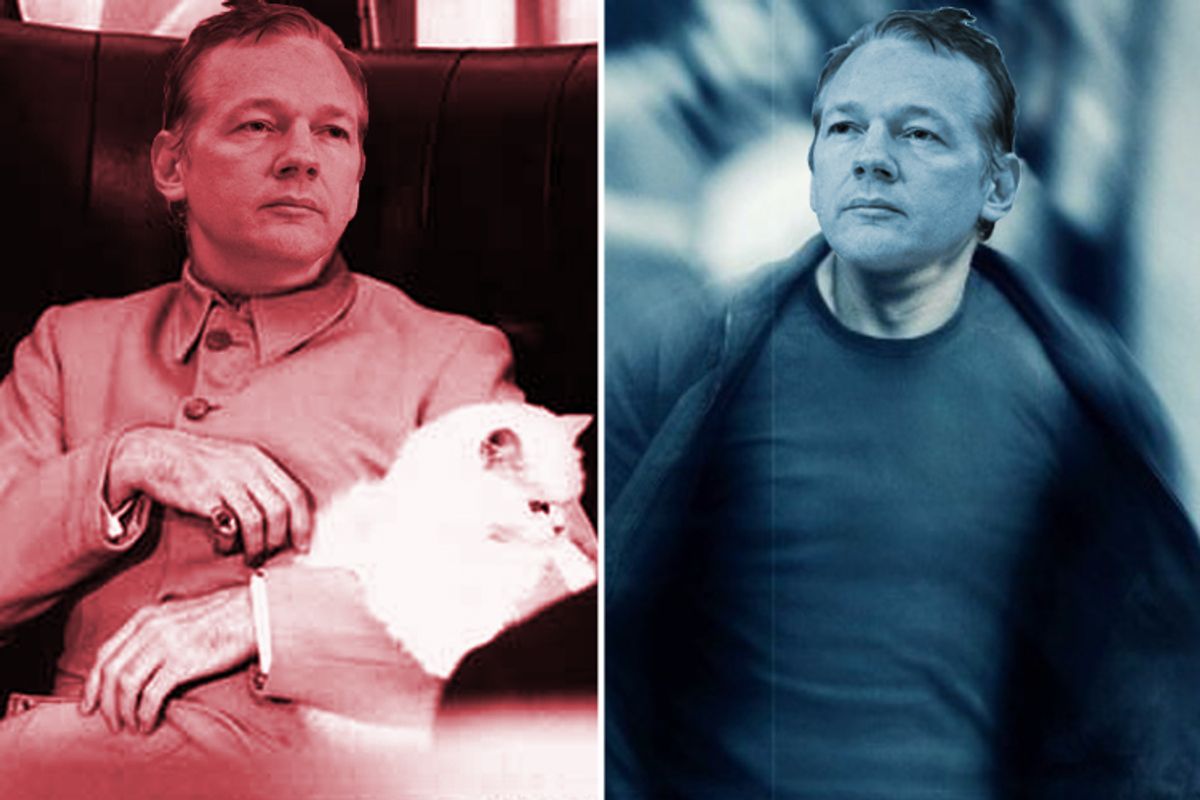 "Choose your next witticism carefully, Mr. Bond, it may be your last." -- Auric Goldfinger, "Goldfinger" (1964)

Meet Julian Assange, the Australian-born troublemaker whose leaks of classified documents have thrown the world into a tizzy. Heads of state, corporate moguls, generals and spies would all like to see him end up dead or in prison. He's rather like -- scratch that, exactly like -- a James Bond villain.

How so? Let the press, the pundits, and the blogosophere illuminate us.

Meghan McCain declared, "He looks like a James Bond villain ... To me he's a villain." Because he has slicked-back hair, presumably. And he's not American. "This guy Assange has the perfect look of a James Bond movie supervillain," wrote a commenter on a National Review piece by Rich Lowry, who said Assange's goal is "wanton destruction, pure and simple" and labeled him "the cyber equivalent of a pirate, an Australian floating between European countries and operating with impunity." According to the Sydney Morning Herald, the story of Assange's out-of-nowhere rise from disgruntled hacker and activist to scourge of the civilized world "reads like a James Bond novel." The blog Natural Fake suggested that Assange actually looked more like a James Bond villain's henchman, and offered five hypothetical quips that Bond might utter before taking him down. ("Information wants to be free? Ahh, but then so does your liver, Assange.")

And have you seen his "lair"? Yes, that's the word that's being used: lair. Really. The Sweden-based company that holds WikiLeaks' servers is built into the side of a mountain; remember Ernst Stavro Blofeld's hideout inside an extinct volcano in "You Only Live Twice"? Like that. Exactly. "Truly the stuff of spy films, the site features solid steel doors and high-powered computers and is resilient against a nuclear attack," wrote the Los Angeles Times. If you only skimmed the L.A. Times story and glanced at the photo -- the preferred mode of reading comprehension in the Google/Twitter/Facebook era -- you might come away with the impression that Assange himself financed, designed and constructed this facility, when in fact it was a bomb shelter built with government funds, then rented out to Swedish Internet host Bahnhof AB, which offers server space to anybody with a PayPal account for X number of kronor a month.

What's going on here? A pop culture template is being superimposed over a news story as if by collective, unconscious wish. The comparison of the Assange affair and a James Bond tale, with Assange as the new Blofeld, has become the official narrative. It's worth asking where it comes from -- and what the obsession with repeating and embellishing it reveals.

Despite the smirky wit and rogue attitude that gave Bond the superficial appearance of a rebel, he was a government employee furthering the interests of the remains of the British empire. He was often aided by representatives of other governments: CIA agent Felix Leiter, for instance, or Major Anya Amasova, the beautiful Russian assassin who partnered with Bond in "The Spy Who Loved Me." Bond wouldn't have been able to do a damned thing without billions of pounds' worth of weaponry and gadgets and expense money and the implicit promise that if he got in over his head (which often happened), Her Majesty's government or its allies would airlift machine gun-wielding shock troops to his aid. What Bond represents is the authority of the state to further its own interests without public oversight or accountability. Although recent incarnations of Bond on film have injected political cynicism into their dialogue -- the Pierce Brosnan and Daniel Craig installments were especially brazen about this -- the audience's enjoyment of Bond's exploits has always been predicated on the idea that for all their myriad flaws, governments are ultimately looking out for us, the people; that they represent stability in a world that would be even more chaotic and vicious if the Ernst Stavro Blofeld types were allowed to operate with impunity, and that we should embrace the fantasy and root for Bond, the attack dog with a license to kill.

The conception of most Bond villains endorsed this government-as-protector idea. Not once in the entire run of James Bond movies was Bond sent into battle against another government and its armies. The enemy was never Russia or China or North Korea, although those nations and others sometimes appeared as incidental players, tormenting or obstructing or sometimes aiding Bond. Nor, for that matter, was the villain ever a traditional corporation; if the bad guy was a mogul of some sort, we were always told that he was crazy or had lost his moral compass, the better to distinguish him from "normal" businesspeople who have the public's best interest at heart and would never use their own connections to governments or criminals to bend or break laws, sow fear, and fatten their bank accounts.

No, the main villain was always a rogue operator -- an industrialist with a God complex, a crime boss with access to huge amounts of weaponry and capital, or some sort of hybrid businessman/criminal manipulating world politics, the media and the markets for profit. Sometimes the bad guys were truly independent operators; other times they were part of an international cartel of conscienceless, anything-for-a-buck villains: for example, S.P.E.C.T.R.E., a global terrorist organization "unaligned to any nation or political ideology," or The Union, "a mercenary organization, working for any third party that requires their help." "The Americans are fools," Dr. No declares. "I offered my services, they refused. So did the East. Now they can both pay for their mistake!"

The Bond universe's "the government is always looking out for us" conceit is a big part of what made the stories so staggeringly profitable. By inventing fabulously wealthy and powerful outsider foes whose destabilizing force rivaled that of governments, Bond's masters -- original author Ian Fleming and his posthumous replacements, the Broccoli family of producers that have controlled the film series since the '60s -- freed the stories of specifics that might stop residents of any nation from feeling that Bond wasn't on their side. As flamboyantly and shamelessly entertaining as Bond stories often are, they're ultimately ads for the unquestioned authority of the state over the individual. No hero backed by the full faith and credit of the entire Western world could ever be considered an underdog, yet that's how Bond is presented, and we buy it because the stories are clever, amusing power fantasies with smatterings of sex and luxury. When Matt Damon, star of the "Bourne" franchise, called Bond "an imperialist, misogynist sociopath who goes around bedding women and swilling martinis and killing people," he pissed off a lot of Bond fans, but he wasn't wrong. He was cutting to the heart of the myth and insisting fans admit what Bond really was: an emblem of authoritarian power and male entitlement, transformed by movie magic, star glamour, and narrative deck-stacking into an underdog hero that even a powerless, penniless wage slave could root for.

And what of Bond's latest nemesis, Julian Assange? By indiscriminately releasing a flood of government documents -- some illustrating his conviction that too much information is needlessly marked "secret," others merely airing diplomats' dirty laundry and possibly opening innocent citizens to invasions of privacy and identity theft -- Assange has opened himself to charges that he's no more than a nihilistic prankster whose pronouncements about transparency are just cover for his own power fantasy; that what he really wants to do is shake up powerful institutions and make their representatives lose sleep. But aside from the "twist a pig's ear, watch him squeal" aspect of Assange's crusade, in a larger sense the Bond villain comparison is completely off-base. There is no visible profit motive here; any money Assange might eventually earn from his shenanigans is minor compared to what Auric Goldfinger, Elliott Carver or other series baddies stood to make: a speaking fee here, some book royalties there, maybe a professorship at a university once he gets out of jail -- and you suspect this story will end with Assange in jail. Assange may be elusive and mysterious -- and for governments, profoundly troubling -- but one thing he's not is powerful. Both the physical pursuit of Assange and the (apparently government-pressured) denial of server space to WikiLeaks don't evoke spectacular, gadget-strewn espionage fantasies, but a glorified game of Whac-a-Mole.

Come to think of it, the Bourne series' title character, an amnesiac ex-assassin pursued by U.S. intelligence agencies, is a slightly better comparison point for Assange than Bond villains. Bourne's sole purpose in life was to expose secretive, government-shielded evil to the world. He had no sanctuary and no dependable allies. Assange is no super-soldier; he's a hacker with hubris and a rather muddled agenda. But as this story plays out, it is becoming increasingly clear that he's not spending any time in undersea fortresses, sipping Dom Perignon and designing an army of killer robots. More likely he's wondering where he'll be sleeping tonight, and whether he'll wake up the next morning a free man or handcuffed in the back of an unmarked van with a hood over his head, asking an unseen captor, "Do you expect me to talk?" and hearing the reply: "No, Mr. Assange. We expect you to die."

OK -- admittedly, that's an image too far. Assange is obviously too complicated, and his mission too problematic, to be distilled into pop culture talking points. But because these stories are part of the air we breathe, it's going to happen anyway -- and we should be careful which ones we choose to embrace, because the decision of whom to identify with and root for says a lot about what we stand for. The state or the individual? The powerful or the comparatively powerless? James Bond or Jason Bourne? That the media and the public appear to have thrown down with Bond is no great surprise; it's always more comforting to identify with the likely winners in a conflict, even if the winners don't have our best interests at heart either. To quote M in "Casino Royale," "Sometimes we pay so much attention to our enemies, we forget to watch our friends as well."