Tucker Carlson's website removes the most offensive line from Joe Rehyansky's column, but isn't sorry for it 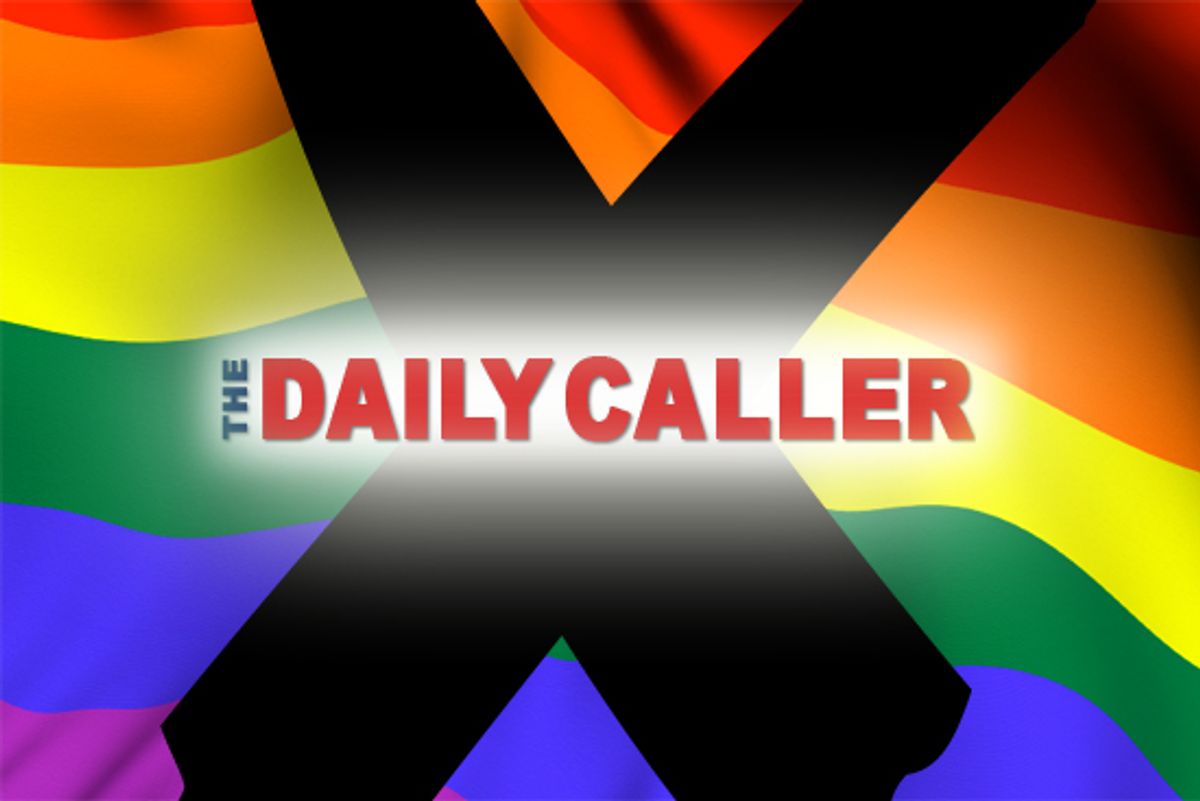 Remember last week's "This Week in Crazy" winner, Joe Rehyansky? He's the old kook who said in Tucker Carlson's Daily Caller that gay men shouldn't be allowed to serve in the armed forces because they all have AIDS and they will look at Joe Rehyansky in the shower, which scares him.

Rehyansky also said he was fine with lesbians serving, because they're less diseased than the gay men and he wants to give "straight male GIs a fair shot at converting lesbians and bringing them into the mainstream."

That line, about converting lesbians, was removed from the column by Daily Caller editors after people began talking about how awful it was.

Last week, The Daily Caller published an article by Rehyansky entitled, "Don’t hint, don’t wink: an immodest proposal." In the article, Rehyansky argues that lesbians should be allowed to serve openly in the US military but gay men should not. He concludes with a sarcastic comment (since removed) saying that if lesbians were allowed in the military, male GIs would be able to turn them straight -- or, in Rehyansky’s words, "convert them into the mainstream."

Liberal bloggers took this sentence to mean that Rehyansky is in favor of raping lesbians in order to turn them straight. What followed was a barrage of articles -- written by bloggers based in at least six different countries -- condemning Rehyansky for "advocating rape."

While it's true that Rehyansky didn't write "male soldiers should rape lesbians until they are straight," calling his line "sarcastic" is the sort of defense you use when you don't have a real defense. (And they removed that line from the column, so ... they apparently didn't find it very defensible last week.)

In the "conversion" fantasy of a straight bigot, the consent of the convertee generally does not enter into it. I'm not sure how, exactly, these lesbians will be "brought into the mainstream," except against their will. So it seems eminently fair to me to argue that Rehyansky, in his entitlement and his bigotry, was making the case for rape, even if he was too foolish to understand that himself.

But if you asked the guy point blank, "Are you in favor of lesbians getting raped," he would most likely say "no." So I can understand why it so frustrated the Daily Caller to see everyone tweeting that a Daily Caller columnist was objectively pro-rape! I am guessing that many people did not read the entire Daily Caller piece (and they would not have seen the offending passage anyway, because Daily Caller editors saw fit to remove it). But this editor's sorrow at an Internet that is full of salacious hit-mongering and idiotic partisan echo chambers rings a bit false, because it's from an editor at the Daily Caller. The fact that no one on the Internet can be bothered to read the damn article is actually a boon for that site, because the crap it prints below its entertaining headlines is usually pretty dire.

And all of that aside, not once does Tucci ever bother to defend the decision to run that lame, insulting, offensive Op-Ed in the first place, nor does he have anything to say about the laughable "argument" it made, nor its many slanders against gay Americans.

So, sorry we liberals "demonized" that miserable bastard whose homophobic rantings you published!

Oh, and here's a fun fact about Mr. Rehyansky: He was recently fired from his part-time job as a magistrate because he made "highly inappropriate comments" to female inmates during bond hearings.

Mr. Rehyansky on Thursday said he regrets some comments made when it was late and he was tired.

He said when a female inmate leaned over he said, "I am not giving you an OR bond because of the cleavage."

Mr. Rehyansky said he was speaking with a female inmate telling her about judicial diversion. He said it was loud in the chambers, so he gave her his card and phone number and told her she could call him later.

Hm. Seems like a fun guy who really respects women! It was a really, really smart decision for Tucker Carlson's Daily Caller to publish his important and well-considered thoughts on "don't ask, don't tell."