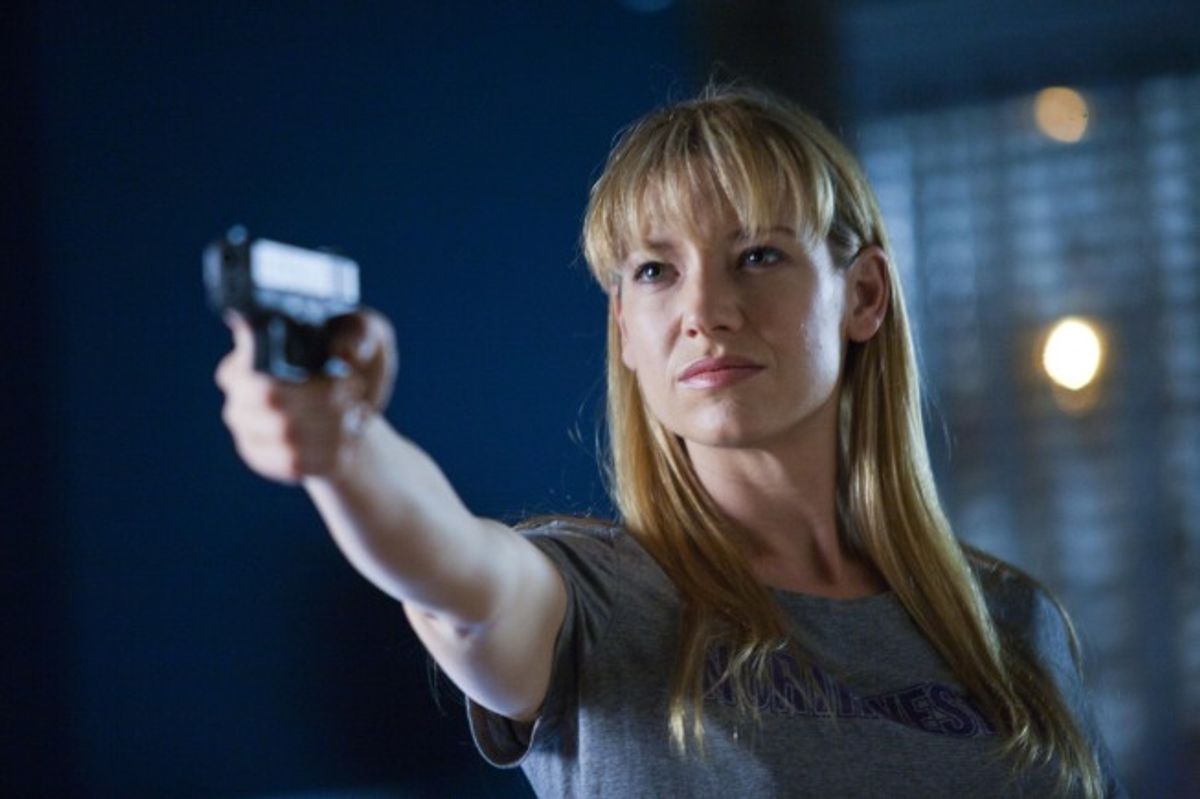 Welcome to the purple episode of Fringe where blue and red universes finally collide.

There have been 50 episodes of Fringe aired so far, and this one easily ranks in the top five that the show has done. Olivia and Alt-livia finally make their ways back to their respective universes, but both women will find things a bit changed since they last left. Olivia may eventually notice that Peter seems to already know his way around her bra clasp, meanwhile Alt-livia may find it a bit strange that her boss has just stopped coming to work for some reason.

The show opens right where we left off, with Peter receiving the tip-off that Olivia is still trapped over on Earth-2. Before the credits have even rolled, Peter has already gotten busy snooping on Alt-livia's laptop, tricked her into revealing herself, and gotten himself paralyzed as Alt-livia drops all pretenses and pulls a gun on him. I guess after teasing us for eight weeks with "When will Peter figure it out?" the show didn't want to waste anymore time with that. The Greek phrase Peter uses to trip Alt-livia up was the same one that Olivia blurted out to him when she returned from her first trip over to Earth-2 at the beginning of Season Two, and alert fans will recall that for Peter and his mother the phrase was a code meaning roughly "Keep the people you love close." It's brilliantly appropriate in this situation.

We flip flop back over to Earth-2, where it sucks to be Olivia. Brandon the lab geek and Walternate discuss the fact that Alt-livia is ready to come home. Walternate suggests that they simply swap two things of equal mass -- in this case, Olivia and Alt-livia. Remember in "Raiders of the Lost Ark" when Indiana Jones swapped out the golden idol for a bag of sand that weighed the same amount? Well, Brandon would like to do that, except in this case he'd like to put bags of sand where Olivia's brain and other vital organs are, and send her body back over. Creepy! This just goes to show you: If you let the nerds rise up they will just turn and murder us all so they can study our innards. That's why I try to wedgie a nerd at least once a week. In any case, the proverbial gun in Act 1 isn't the actual gun that Alt-livia pulls on Peter, but the factoid about swapping things of equal mass, so keep that in mind when we get to Act 3.

Over on Earth-1, the Fringe team races to catch Alt-livia before she crosses back over. Along the way they discover the typewriter repair shop that houses the Selectric 251 typewriter, as well as a charming little pastry shop in the Bronx. Peter is clearly mortified about the whole situation, and Walter doesn't help things by blabbering to everyone about how Alt-livia has tricked Peter with her wicked carnal manipulations and her "vagenda." There's one particularly funny part when Walter mournfully regards his fried dough treat and laments that Alt-livia tricked him as well by appealing to his stomach. Ah well, the Bishops shouldn't beat themselves up too much -- Alt-livia's cookie, both literal and metaphorical, is too hard to resist.

Meanwhile on Earth-2, Broyles weighs his long-held belief that Earth-1 people are all evil monsters who want to destroy his universe with the fact that he totally owes Olivia for saving his family from the Candyman. Eventually, Olivia's pathetic pleas for help, along with a gentle push from his wife and a semi-heavy handed comment from a bartender about Earth-2 needing heroes, inspires Broyles to help. They escape just in the nick of time before Brandon can begin carving her up like a Thanksgiving turkey.

At this point, the episode really picks up steam, as the Fringe team closes in on Alt-livia at Penn Station in Newark, just as Broyles is driving Olivia to Walternate's old lab at Harvard. Luckily even though there's a huge block of amber just outside and the lab is clearly closed for business, Olivia can still refill the sensory deprivation tank, because apparently on Earth-2 people just leave big bags of rock salt lying around and the water turned on in abandoned buildings. Olivia manages to jump back over just before the Earth-2 authorities bust in and capture Broyles.

Cornered in the station by the cops and Fringe division, Alt-livia attempts to escape by taking a hostage, but Peter outsmarts her this round by correctly figuring out that the terrified woman in her arms is actually a shapeshifter ally. Captured, Alt-livia tries once more to apply her feminine wiles to Peter by implying that while she initially may have slept with him as part of her normal business she eventually developed feelings for him. Peter doesn't buy it, though he later discovers that Alt-livia had packed a strip of photos of the two of them to take back to Earth-2 with her. Peter makes this sad face and I think we're supposed to interpret this as a sign that Alt-livia really did care for him on some level. I personally think it's just as likely that she was taking the photos as some sort of weird serial killer-esque memento of her time of mayhem, murder and sex on Earth-1, but who knows?

This victory is short-lived, however, since the shapeshifter managed to inject Alt-livia with the harmonic implants needed to vibrate her horrible lying face back over to Earth-2. If you were wondering how Walternate was going to take Broyles's betrayal, you're about to get your answer, as Alt-livia's scrawny self vibrates away back to Earth-2 and is replaced by an object of equal mass. How many Alt-livias it takes to fill up one Philip Broyles? The answer is: 1.25, as we see that Broyles is not only dead but missing a leg and part of his arm. Aw, R.I.P. Earth-2's Philip Broyles. We will miss you and your form-fitting black t-shirts.

Though it looks like we may be taking a break from Earth-2 for awhile, that's okay, since there's plenty of fallout on Earth-1 to deal with for the time being. However, there are still plenty of interesting tidbits at the end of the episode that I suspect we'll see again. First, there's the stolen piece of the Doomsday Vacuum that Alt-livia had sent to a mysterious new man before she jumped universes. Who is he, and what does he plan to do with the component? Second, there's the fact that the Earth-2 Fringe team has not been filled in on the fact that Walternate sanctioned the execution and postmortem mutilation of Broyles. Not even Alt-livia, who benefited the most from this decision, seems to know what happened. How will the team react if and when they find out about this betrayal of one of their own? Finally, which daytime talk show will Peter take Olivia on for the big "I slept with your doppleganger" reveal?

Summary: I suspect we haven't seen the last of Alt-livia's vagenda.