The upside of the "Celtic Chimera"

We are being punished for something. Possibly for thinking we were as good as everyone else 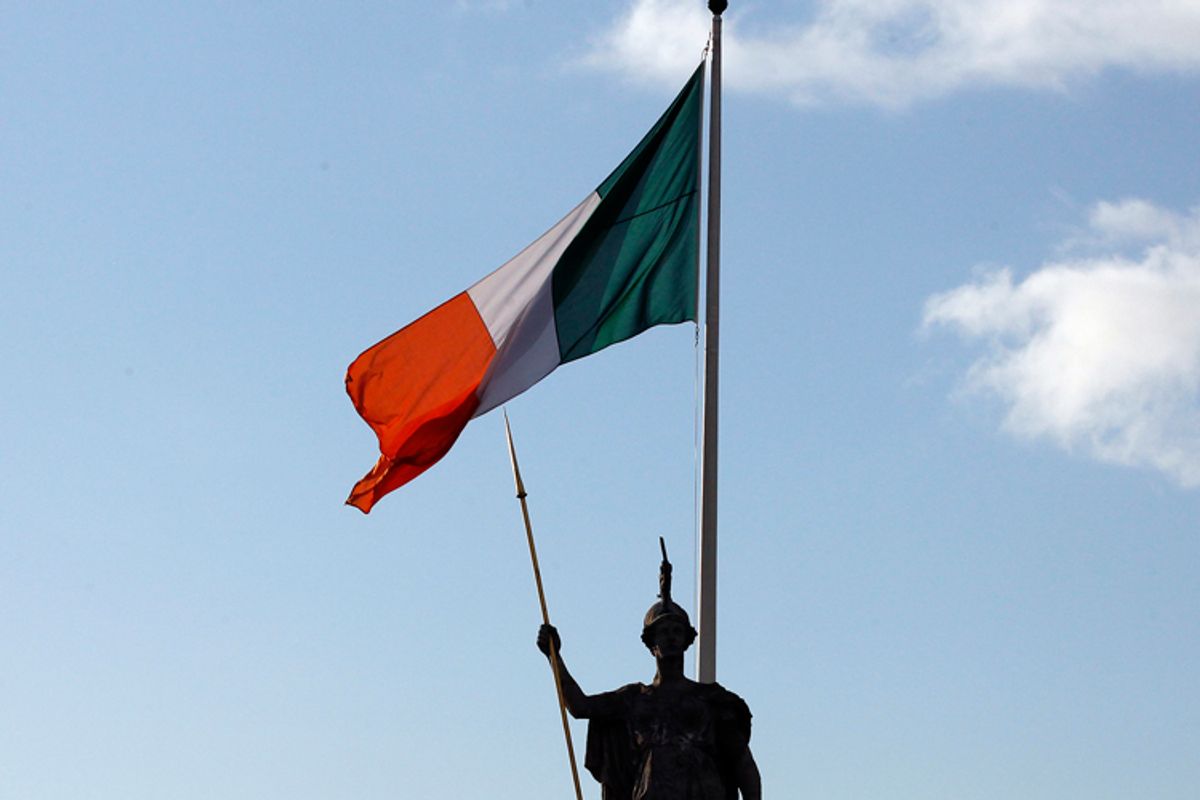 As an Irish person living in New York I can usually tell how often an American reads the world news pages of a newspaper by the questions they ask about my home country. If they earnestly want to know if "there are still bombs everywhere" then it might have been quite some time. If they’re still asking about the Celtic Tiger and if everyone is rich "over there" then you may assume it’s been a few years. If, on the other hand, they ask you how you managed to "escape the mess" then they are fully debriefed and unlikely to have any follow-up queries about leprechauns.

As of the past three weeks there can't be many Yanks who are clinging to fairy tales about the Old Country, be they of pots o' gold or pots o' dough. For in Ireland's spectacular economic failure -- only intervention by the IMF has saved us from bankruptcy -- we are, for once, the center of U.S. media attention. We have migrated out of the foreign page footnotes and into the headlines. "Ireland’s Big Mistake," shouted the New York Times in an article that compared the Emerald Isle to Texas, the most bankrupt and mortgage-delinquent state in the union. The San Francisco Chronicle phrased it more memorably, dubbing the current situation a "Celtic Chimera."

In Ireland itself there is palpable fury. On a daily basis the local press bay for the head of the Taoiseach (prime minister). In recent weeks several government ministers have been physically attacked and workers have taken to the street en masse in protest against the draconian budget, which is a condition of IMF lending. Meanwhile, the country is having the heaviest snowfall in its history, bringing Dublin to a standstill. At this point nobody would be surprised if a plague of locusts came next. We are being punished for something, possibly for thinking we were as good as everyone else.

And yet for all of the outrage there is also a sense among some Irish people that the country badly needed to come back to earth. The exchequer surplus and property bubble of the past 15 years had improved the bank balances of the Irish but they had also created a country where people were being continually ripped off, a country with a vastly bloated welfare state, a country that had forgotten its long tradition of hospitality and had embraced a culture of greed. A cleansing recession was sorely needed.

To live in Dublin during the boom was to witness a startling transformation of Irish culture. Once the redheaded stepchild of Europe, we used our new money to dye our hair blond, have our naturally white skin caked with fake tan and our teeth whitened until they glowed blue. Suddenly we preferred frothy cappuccinos to good old Irish tea. We began speaking in faintly American accents, aping the sitcoms we watched on television. Nobody ate bacon and cabbage, unless they were being ironic, and our chief musical export became the boy band. Poverty was viewed as a very old-fashioned idea -- even people on unemployment could take city breaks to Paris. Alcoholism might have been the only tradition to doggedly survive from the old Ireland. Even at the peak of the country’s wealth the streets of Dublin flowed with vomit.

Property was the engine driving what Nobel Prize winner Josef Stiglitz called Ireland’s "fake growth." And we all wanted a piece of it. In 2006, when I purchased my apartment in Dublin, a square foot of prime real estate in the city cost about the same as the equivalent square foot of property in downtown Manhattan. I had to hurry on the sale, the realtor told me. If I wanted to think about it until the afternoon the price would probably have jumped by a few more thousand euros. The night the deal was finally closed I went out with an American friend to celebrate and he was shocked to see that the price of a pint of Guinness incrementally went up as the night progressed (this was standard practice in Celtic Tiger-era Dublin). He noted also that not a single person working in the bar was Irish -- the natives having long since moved on from such menial labor. The famed "Ireland of a thousand welcomes" had been ceded to low-paid, dour Polish immigrants. Affluence had bleached the character out of Dublin, and my American friend, like so many others, left feeling that the Old Country was, to quote W.B. Yeats, "dead and gone ... with O'Leary in the grave." Arrogance and avarice dominated the city.

And with this came a deep sense of entitlement. It was expected the state would pay for everything; healthcare, education, housing. Unemployment benefits are open ended in Ireland. You can spend your entire adult life "on the dole" if you so wish. Everyone who needs it is entitled to a state pension, which even the current cash-strapped administration does not dare lower. Some of the protests seen in the news in recent weeks came because university fees have been raised from 1,500 euro ($1,982) to 2,500 euro ($3,306). To Americans, who spend the first decade of their working lives paying off student loans, this seems ludicrously spoiled. But in Ireland any suggestion of weaning the population off the welfare teat is considered treasonous.

Nobody wanted this recession. In an ideal world Ireland would, in her own good time, have realized that the blond hair and bad attitude weren't really becoming. She would have ditched the fake accent and realized that her soul was not worth a property portfolio. But now that this realization has been forced upon us we should embrace it. The Irish poet Patrick Kavanagh wrote of the "Advent-darkened room/ Where the dry black bread and the sugarless tea/Of penance will charm back the luxury/ Of a child's soul." The Irish were always the bright, poor, creative children of Europe. They will arrive in their droves to America in the coming years, but perhaps now they will leave behind a hinterland that we can once again be proud of. It's time. Advent is upon us.

Donal Lynch is a columnist with the Sunday Independent, an Irish newspaper. He lives in New York City.