Testimony by Gen. James Amos gives ammunition to foes of the effort to allow gays to serve openly 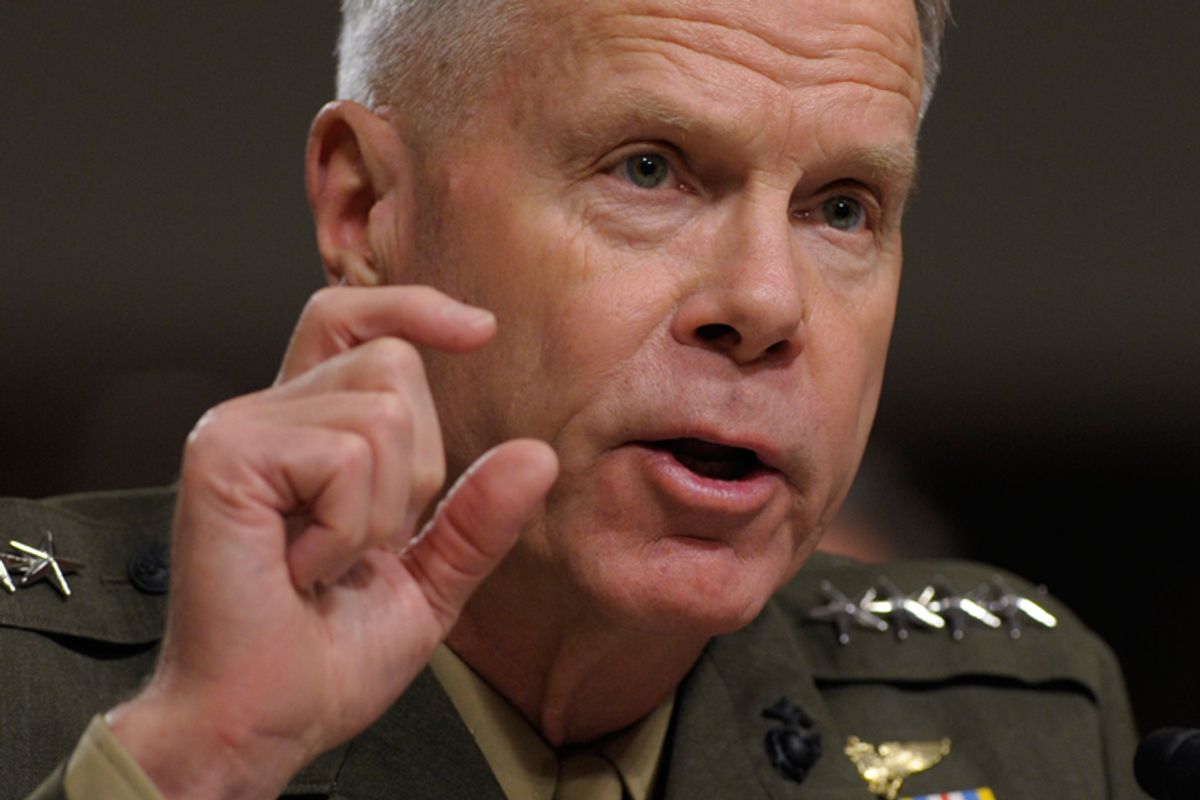 The Senate testimony today from Gen. James Amos, commandant of the Marine Corps, is certain to strengthen the position of senators opposing the repeal of "don't ask, don't tell":

That said, if the law is changed, successfully implementing repeal and assimilating openly homosexual Marines into the woven fabric of our combat units has strong potential for disruption at the small unit level, as it will no doubt divert leadership attention away from an almost singular focus of preparing units for combat. I do not know how distracting that effort would be, nor how much risk it portends. While the study concludes that "repeal can be implemented now, provided it is done in manner that minimizes the burden on leaders in deployed areas," the survey data as it relates to the Marine Corps' combat arms forces does not support that assertion. I cannot reconcile, nor turn my back, on the negative perceptions held by our Marines who are most engaged in the hard work of day-to-day operations in Afghanistan. We asked for their opinions and they gave them to us. Their message to me is that the potential exists for disruption to the successful execution of our current combat mission should repeal be implemented at this time.

The second question is "should we at this time?" Based on what I know about the very tough fight on the ground in Afghanistan, the almost singular focus of our combat forces as they train up and deploy into theater, the necessary woven culture of those combat forces that we are asking so much of at this time, and finally the direct feedback from the survey, my recommendation is that we should not implement repeal at this time.

His full prepared remarks are here (.pdf). It's true that, as Amos said in his testimony, discomfort with repeal is higher among Marines than in the military as a whole. It's worth noting, though, that the Amos' argument -- that there can be no repeal while the United States is at war -- is a de facto argument for never repealing "don't ask, don't tell" (especially if one counts the "war on terror").

Nevertheless, look for Sen. John McCain and others to trumpet this testimony.