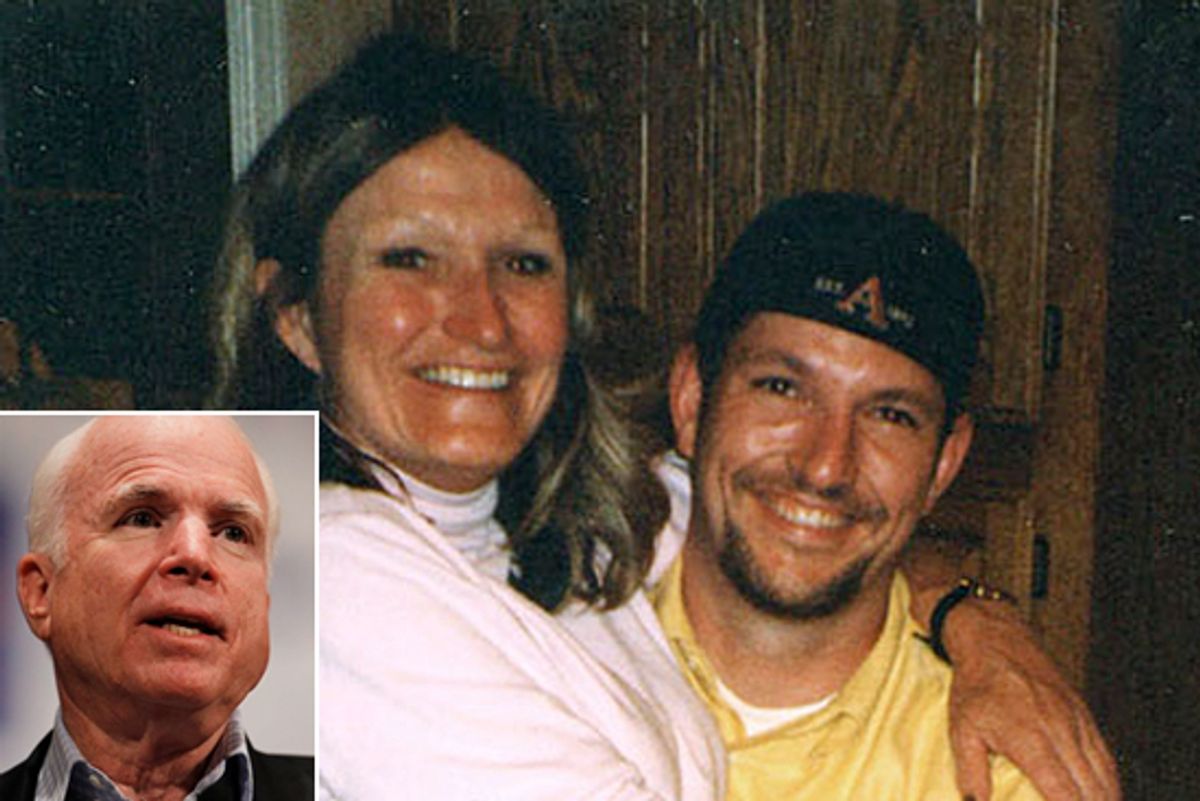 The mother of a gay man who was memorably eulogized by Sen. John McCain after his death on Sept. 11, 2001, is now imploring the senator to change what she calls his "very regrettable" opposition to the repeal of "don't ask, don't tell."

"I'd hope that he'd take counsel with his wife and reconsider and realize that it's a new day," Alice Hoagland told Salon Thursday from her home in Los Gatos, California. Hoagland's 31-year-old son, Mark Bingham, was one of the passengers believed to have stormed the cockpit on United Airlines flight 93, which hijackers were apparently hoping to fly into the U.S. Capitol. Instead, it crashed in Southwest Pennsylvania, killing everyone aboard.

Bingham, a public relations executive and rugby enthusiast, had supported McCain's presidential 2000 campaign and kept a picture of himself with the senator displayed in his San Francisco office. Shortly after 9/11, a fatigued McCain made the trip to Berkeley to attend Bingham's memorial service, where he delivered a tearful eulogy that garnered headlines and praise from the gay community.

Noting that Flight 93 seemed bound for the Capitol, McCain said, "I may very well owe my life to Mark and the others who summoned the enormous courage and love necessary to deny those depraved, hateful men their terrible triumph." He continued:

In the Gospel of John it is written "Greater love hath no man than this, that a man lay down his life for his friends." Such was the love that Mark and his comrades possessed, as they laid down their lives for others. A love so sublime that only God's love surpasses it.

Hoagland, who since her son's death has been active pushing for both increased airline security and gay rights, tells Salon that she deeply respects McCain, but cannot abide his position on "don't ask, don't tell." She intends to write him a letter arguing that "the gay men and women who are in our military deserve better than they have been given to date. Repeal is an idea whose time has come  -- quite a while back."

McCain, who survived a contentious primary challenge before winning reelection this year, has taken a sharp turn to the right in recent years; he is now leading the charge against repeal of DADT, despite strong support for repeal among military and Defense Department leaders.

Perhaps nothing better highlights McCain's evolution than his fairly remarkable (for a Republican) outreach to gay voters in 2008 -- a time when McCain had already turned his back on some of his "maverick" roots.

In an interview with a gay newspaper a month before election day in 2008, McCain invoked his appearance at Bingham's funeral as he appealed for votes from gay Americans. Asked by the Washington Blade if he had "any role models who are openly gay, lesbian, bisexual or transgender," McCain responded:

"I had the humbling experience of speaking at Mark Bingham’s funeral after the attacks on Sept. 11. Mark had supported me during the 2000 campaign. ... I honor and respect Mark."

Hoagland says that she took heart in his invocation of her son's name at the time. Now, she just hopes he will change his stance.

"Senator McCain's influence and validation would be wonderful. I just wish he weren't quite so strident on this," she says. "There is lots of evidence -- including that survey that he now faults -- that America is changing its mind."