Scientists' announcement of a new form of microbe raises questions about extraterrestrial life. An expert explains 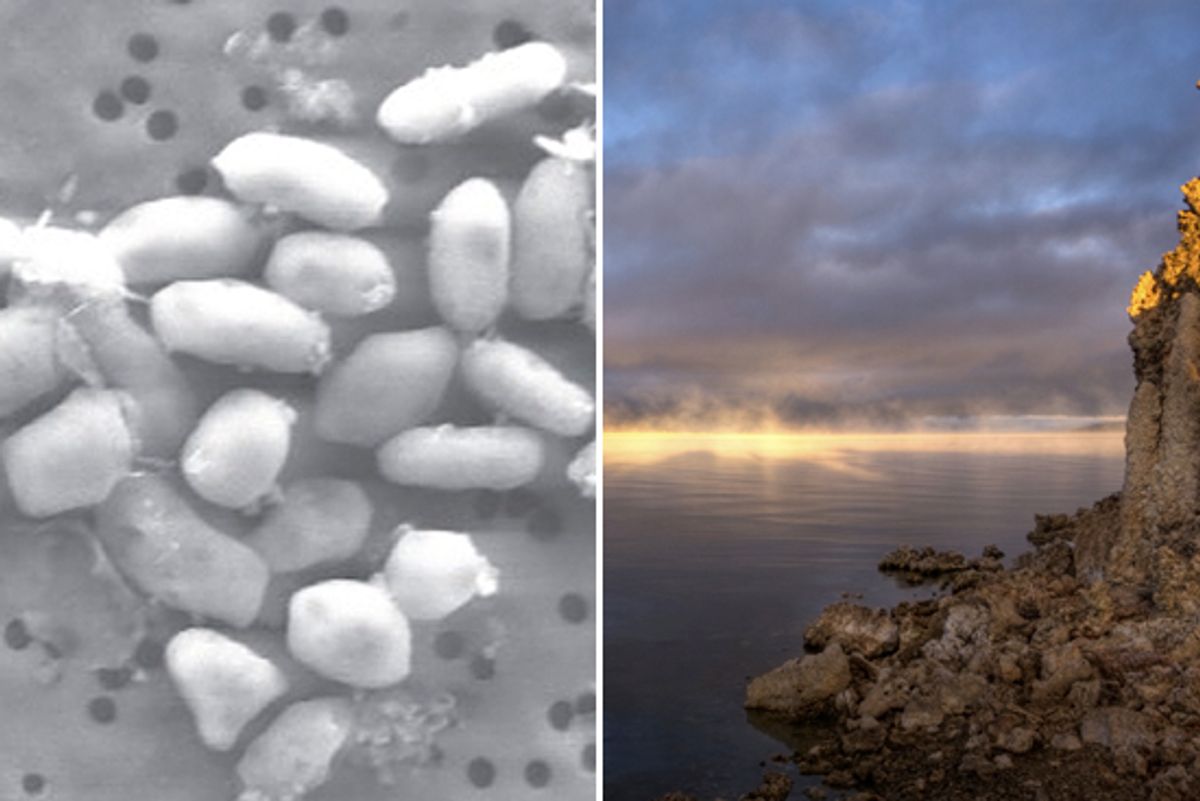 In a much anticipated press conference yesterday afternoon, NASA astrobiologists announced the discovery of an amazing new kind of microbes, which extend the boundaries of what we may rightly call life. According to the press release, "NASA-funded astrobiology research has changed the fundamental knowledge about what comprises all known life on Earth." Discovered in Mono Lake, an extremely salty and alkaline body of water near Yosemite National Park in California, the microorganism is the first known specimen to substitute arsenic for phosphorus in its cell components, and has raised questions about what the discovery means for extraterrestrial life.

To find out what it really means, we called Robert Shapiro, a professor of chemistry at New York University who has written extensively about life's origins on earth and its potential existence in outer space.

What does this mean for the discovery of life in our solar system or universe?

Not much, except that people may need to broaden their perspectives, and that we should be less "Terracentric" as we seek out new forms of life. Mostly, this discovery adds a new extremophile [organism that lives in an extreme environment] to our inventory -- it pushes the boundaries out a little farther. The grand prize would be to discover an independent origin of life: life with its very own chemistry. Such a discovery wouldn't just say that evolution is robust, it would say that life is abundant. But this discovery doesn't do that: These organisms are not completely different in their chemical makeup from what we already know.

From what I can tell, the microbes prefer to live "normally" but may insert arsenic as a substitute for phosphorus when conditions demand it -- arsenic can play the same role that phosphorus would play under normal circumstances. This is a great novelty. Arsenic is bigger and heavier than phosphorus, and its compounds are less stable. These organisms would not have done this unless they didn't have any other choice. Just like Dr. Gerald Joyce, who was quoted in the New York Times today, I feel sorry for these creatures. Their living conditions are horrible -- their environment would be poisonous to most other life on Earth.

Are there any lessons about where to focus our search for extraterrestrial life?

Broader searches are better searches. I always marveled at how parochial the searches were that focused on existing genetic assumptions. Hopefully, these findings will shift attention at NASA from [Jupiter moon] Europa -- where life may be more familiar, but trapped under a deep ice cap -- to [Saturn moon] Titan -- where surface life could exist, but conditions are most hostile to traditional life-forms.

That said, it does reinforce Paul Davies' "Shadow Biosphere" theory that suggests we may be missing major strains of life right here on Earth -- either in places traditionally deemed too hostile to life or maybe even right under our noses. An obvious question, then, would be to ask how alternate forms of life could have escaped our notice all this time. Some argue that carbon life may have  evolved from mineral life with no carbon of its own, and one could imagine experiments to test this hypothesis. You could simply introduce a carbon-free broth to a carbon-free environment, for example, and see what grows. Or as some people suggest, there could be benefits to testing radioactive environments.

You mentioned that arsenic is poisonous. Are there any industrial applications of these critters that spring to mind?

No, there's no obvious industrial applications. It just shakes up our thinking about what's possible.

So what's the takeaway, then?