This week in crazy: John McCain

The old maverick invents the weirdest reason yet to oppose the repeal of "don't ask, don't tell" 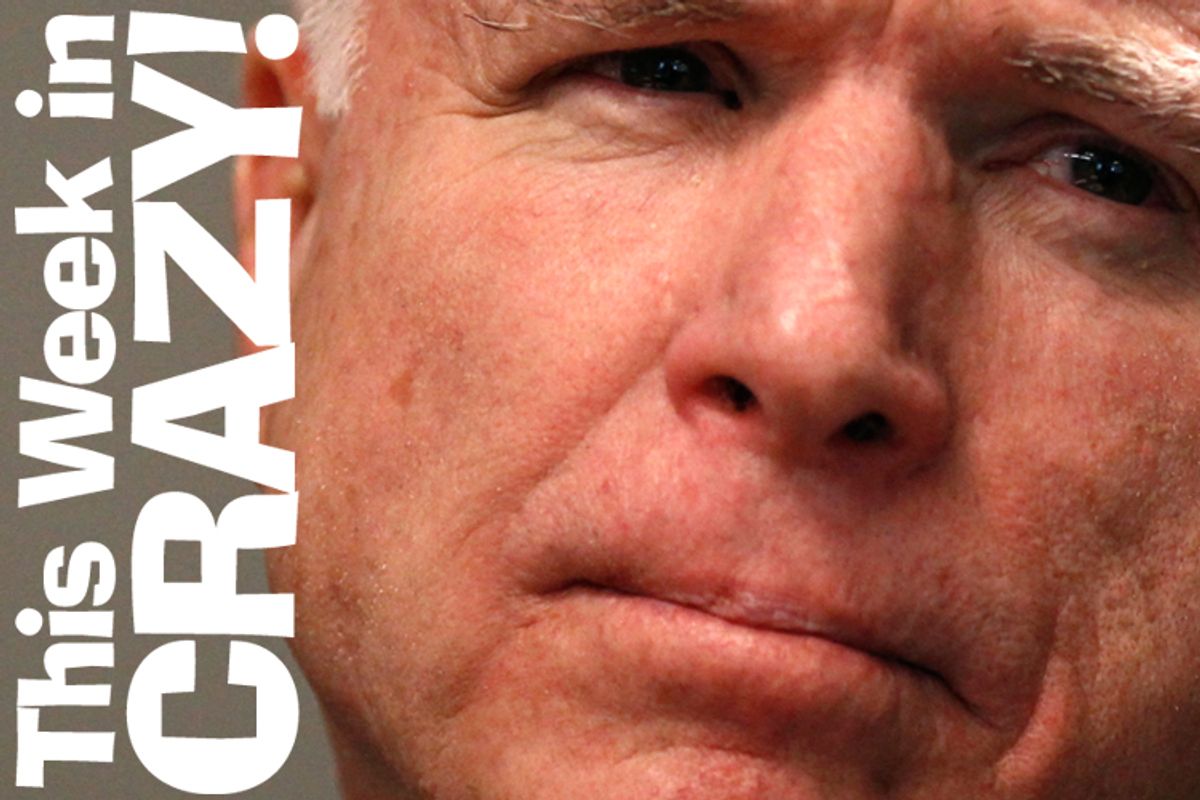 John McCain has finally, inexorably stumbled upon the weirdest and most transparently troll-ish reason yet to oppose the repeal of the military's ban on gay and lesbian service members: The economy sucks.

That's it. The Senate can't address a fundamental inequity, because the markets are down.

"I will not agree to have this bill go forward, and neither will, I believe, 41 of my colleagues, either, because our economy is in the tank," said Sen. John McCain of Arizona, the ranking Republican on the Armed Services Committee and the leading opponent of an immediate repeal.

For those playing along at home, John McCain conditionally supported the repeal of "don't ask, don't tell" until Barack Obama got elected and began pushing the Senate to do something about it. Once military leadership told McCain the policy should be repealed, he said, he would vote to repeal it, and now that the Republican defense secretary and the chairman of the Joint Chiefs have told McCain that it should be repealed, he is vowing to fight it with everything he's got.

But, like, he had excuses before. Not great ones, but they sounded coherent on Sunday shows. Once the commanders came around, he wanted to wait for the results of the Pentagon's review of how repeal would be implemented. That review is done. Then McCain just needed more time to read it. Then he had a problem with some of the survey questions. Then he was upset that more Marines oppose repeal than other branches. Then he was upset with the survey's response rate. Transparent straw-grasping, but at least those objections had something to do with the issue at hand.

Now, well, shoot: John is opposed to repeal of "don't ask, don't tell" because of non sequiturs. "My friends, I will not vote for this bill to go forward because Ke$ha did not receive a single Grammy nomination, and the American people want us to focus on that as a priority."

McCain's vaunted "independence" was always something closer to incoherence. He'll hold wildly different positions on issues depending on the weather, or, more specifically, depending on whom he's friendly with and whom he resents today. The boxing enthusiast who once campaigned to ban Ultimate Fighting for no reason other than he didn't like the looks of it has always been intellectually inconsistent, to say the least. But he's lost his mind on the simple question of whether or not gays and lesbians should be allowed to serve their country openly and with honor.

If he thinks the answer to that question is no, he won't just come out and say it. In his attempts to avoid endorsing bigotry while simultaneously doing everything he can to keep discrimination enshrined in the law, he's clearly completely cracking up. Even his partner in irritating independence Joe Lieberman is being reasonable this time around. Could one well-crafted question on "Meet the Press" send McCain completely over the edge?