Why you should be watching Jimmy Kimmel

In the wake of the late-night wars, one host emerges victorious -- and his name isn't Jay or Conan or Dave 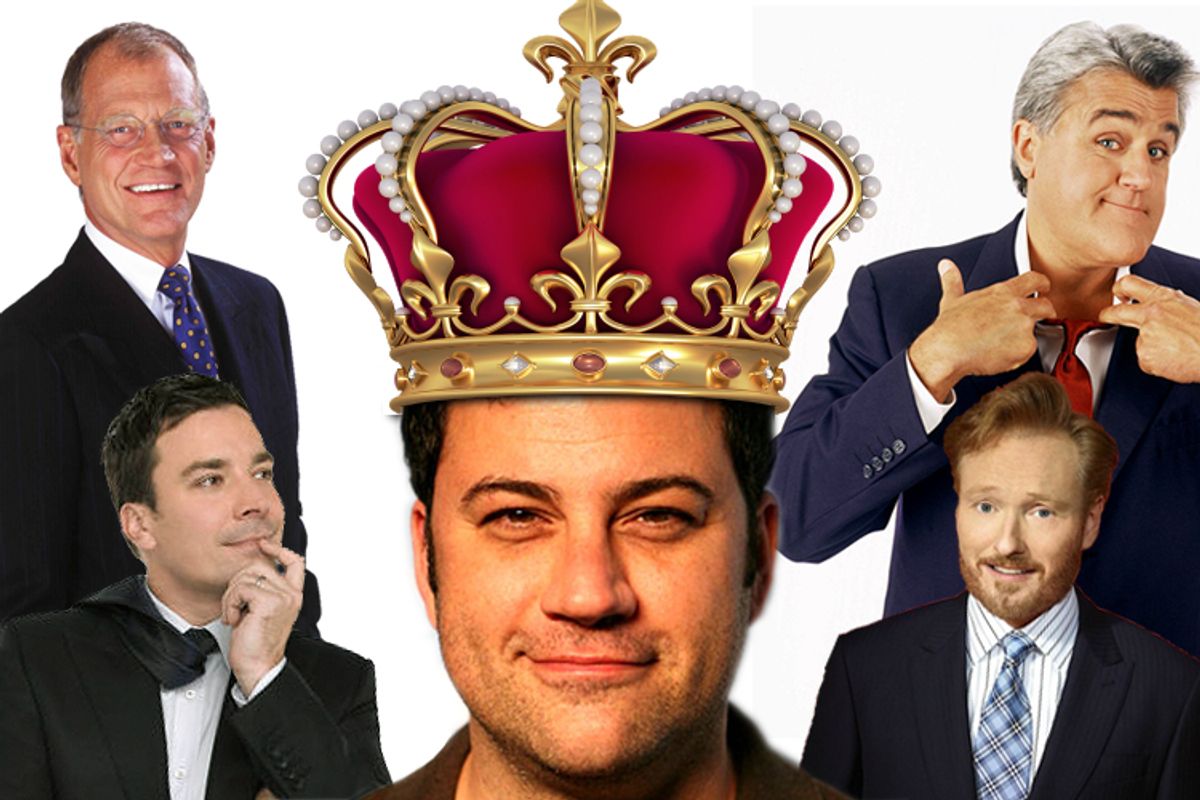 Shots were fired, angry accusations flew, risky stands were taken, and gigantic egos were bruised -- but did anyone really win the late night wars? Since waging a valiant crusade against NBC and Jay Leno, Conan O'Brien finally retreated to TBS, comforted by the rabid devotion of Team Coco members nationwide. But even as his ratings remain impressive, he's faced with one recurring question: How many self-deprecating basic cable jokes does it take to mask the defeat inherent in trading in a lifelong dream of hosting "The Tonight Show" for a spot in television's hinterlands? Meanwhile, Jay Leno continues to play the clueless country uncle who came home from the state fair with a shiny new Corvette he won at the ring toss, gamely telling his ultra-sophisticated fat jokes and terrorist jokes and ugly-sister jokes on a set about as stylish and edgy as the lobby of the Cheesecake Factory. Snickering on the sidelines, as always, is David Letterman, who delighted at playing the bemused onlooker in this bloody conflict, but still never emerged as the clear ratings winner of the lot. Although he must've taken some real satisfaction in demonstrating just how much pain and anguish NBC could've spared itself by awarding him "The Tonight Show" gig almost two decades ago, Letterman has been doing the same incredulous snark routine for so long now (without many variations or imaginative twists), that not even an awkward admission of infidelity could shake us out of our indifference.

While the old familiar faces of late night don't do much more than make us chuckle ourselves to sleep at night, one man has been calmly and quietly upping his game: Jimmy Kimmel. Despite his distance from the action, it was Kimmel who took some of the most direct shots at Leno during the late night wars. In addition to imitating Leno on "Jimmy Kimmel Live!" and then appearing on Leno's show and insulting him to his face, Kimmel has been more outspoken than Conan himself about Leno's sneaky strategy to take back "The Tonight Show" (although Bill Carter's new book, "The War for Late Night," seems to suggest that Leno wasn't quite so calculating as Kimmel and others seem to assume). When asked in an interview with GQ this month what he learned from the late night dust-up, Kimmel replied: "The lesson is, it pays to be sneaky. I think that's the main thing I learned. That, and don't trust Jay Leno."

It's this frank talk that sets Jimmy Kimmel apart from his peers. Throw in the sharpest and funniest opening monologue on late night, an incredible knack for improv, and liberal use of off-kilter gimmicks and skits, and it's no wonder that Kimmel has risen to the rank of late night king. Whether he's launching a multitiered attack on Facebook idiocy with his National Unfriend Day, finding creative new ways to insult Matt Damon, or shooting an entire episode during a power outage using only his webcam, Kimmel has always had that combination of swagger and imagination that separates the good talk show hosts from the great ones. Like Johnny Carson and Letterman in his heyday, Kimmel has the bluster and the quick wit to make every moment watching him on the air feel dynamic and exciting.

That's no small feat, of course, but it's what real late night heroism demands. Kimmel tackles pop culture with more sharp wit and weirdo flair than any of the other late night hosts, whether he's addressing the new Spider-Man musical ("I've been working on a superhero show myself, it's called 'Aquaman on Ice.' Aquaman on skates, trying desperately to speak to his friends who are trapped under the layer of ice. That's a musical!"), rumors that Snoop Dogg will play at Prince William's bachelor party ("I'm excited for His Highness, and by His Highness, I mean both of them"), airline security pat-downs ("We freak out if a TSA agent touches us on the outside of our pants, but Black Friday, we will hump each other's heads to get at Walmart to save 8 bucks on a PSP"), or even the plans to have Lindsay Lohan appear on "Dancing With the Stars" ("I would love to see her vomit on Len Goodman").

When he's interviewing guests, Kimmel is arguably better on his feet and more ready with unexpected quips than any other host. On a recent episode when Ben Affleck waxed sympathetic about hard economic times in America, Kimmel soon hinted that no one wants to hear a megastar fake emotion for the little people.

Affleck: I don't think there's anybody in the United States that hasn't been affected (by the recession) in some way or another.

Kimmel: Oprah hasn't been affected at all.

On another recent episode, Kimmel took an otherwise bland interview with Kate Bosworth and livened it up. (And let's face it, the real test of good late-night hosting lies in finding some way to spice up interviews with dull, self-involved young actors and actresses. In addition to Kimmel, only Letterman and Craig Ferguson manage it with any regularity.)

Bosworth: (on her Korean co-star) He literally is the Brad Pitt of Korea. It's pretty wild.

He even managed to save an interview with Paris Hilton from the bowels of hell:

Kimmel: Wait a minute, now. I saw a television show in which you picked a best friend and he wasn't it. Are you telling me that was not your real BFF?

Later, when Hilton called her new perfume "my tenth fragrance," Kimmel countered, "That seems like too many fragrances to me."

This is where the fans of Jimmy Fallon, who have been rallying lately to crown their contagiously giddy leader the supreme ruler of late night, really must admit defeat. While Fallon's antics try our patience in all the right ways (Zach Galifianakis' recent appearance, followed by a skit the very finest flavor of stupid, marked a recent high point), Fallon is a pretty bland interviewer, sometimes resembling Chris Farley's guffawing yes-man talk show host of "SNL" legend. Nonetheless, Fallon is undoubtedly in the groove lately, with such sure-footed oddball gimmicks and quirky enthusiasm that it makes you wonder if "The Chris Farley Show" itself wouldn't have morphed into something deliciously strange, if given enough time. And let's face it, anyone who makes Helen Mirren play beer pong deserves at least an honorable mention, if not an Emmy.

While he might be the best Neil Young impersonator on late night (or anywhere else), Fallon has none of the subtle snideness that made Carson, Letterman and now Kimmel masters of the craft. Sure, the kind folks down at the local elementary school's bake sale might find such a tone distasteful, but the rest of us, who've been marinating in a toxic mix of "The Love Boat," People magazine and celebreality shows for years now, need a healthy dollop of scorn to make the celebrity promotional appearance go down a little more smoothly.

Fans of Craig Ferguson will point out that he shares the requisite doubting tone in his interviews, and also scores very high for sheer courage of conviction. And it's true that to watch half a second of Ferguson's show is to love him, from his googly-eyed knowing looks to his perverse but genius rambling asides. His self-effacing charms make his perhaps the most unpredictable and unruly of the late night shows. However enchantingly strange Ferguson's monologues and interviews may be, they just don't stack up to Kimmel's.

And like Letterman, Kimmel carries the torch of bemoaning his network overlords, lamenting the dumb stuff ABC makes him promote. The imbedded advertising -- Bud Light signs on the stage, Old Navy promotions at the start of the show, constant appearances by "Dancing With the Stars" contestants -- isn't all that easy to ignore, but Kimmel makes the best of it. He's taken to calling himself "the three-headed dog the stars must pass on their way to no-dancing hell," and after that show's big finale, he told his audience, "I tell you something, I had a good morning. I woke up this morning, and for about three minutes, couldn't remember who won "Dancing With the Stars" this year. It felt great, it really did."

But Kimmel should wake up feeling great every morning. After all, who would've thought that this guy would be the big winner of the late night debacle of 2010? When you flip from Conan to Leno to Letterman, or stay up for Carson Daly or Fallon or Ferguson, even though you might appreciate Ferguson's bizarro self-deprecating digressions or Fallon's raw enthusiasm, Kimmel is the only host who will make you laugh out loud more than a few times per episode. He's got the sharpest monologue, the most interesting digressions and skits, and the best interviewing skills. Now that the dust has cleared, "The Tonight Show" doesn't look like a prize worth squabbling over, because, with or without the Cheesecake Factory backdrop, Jimmy Kimmel is the new Johnny Carson.