Same-sex marriage ban seekers send only two witnesses in California Prop 8 case, hoping for law to back them 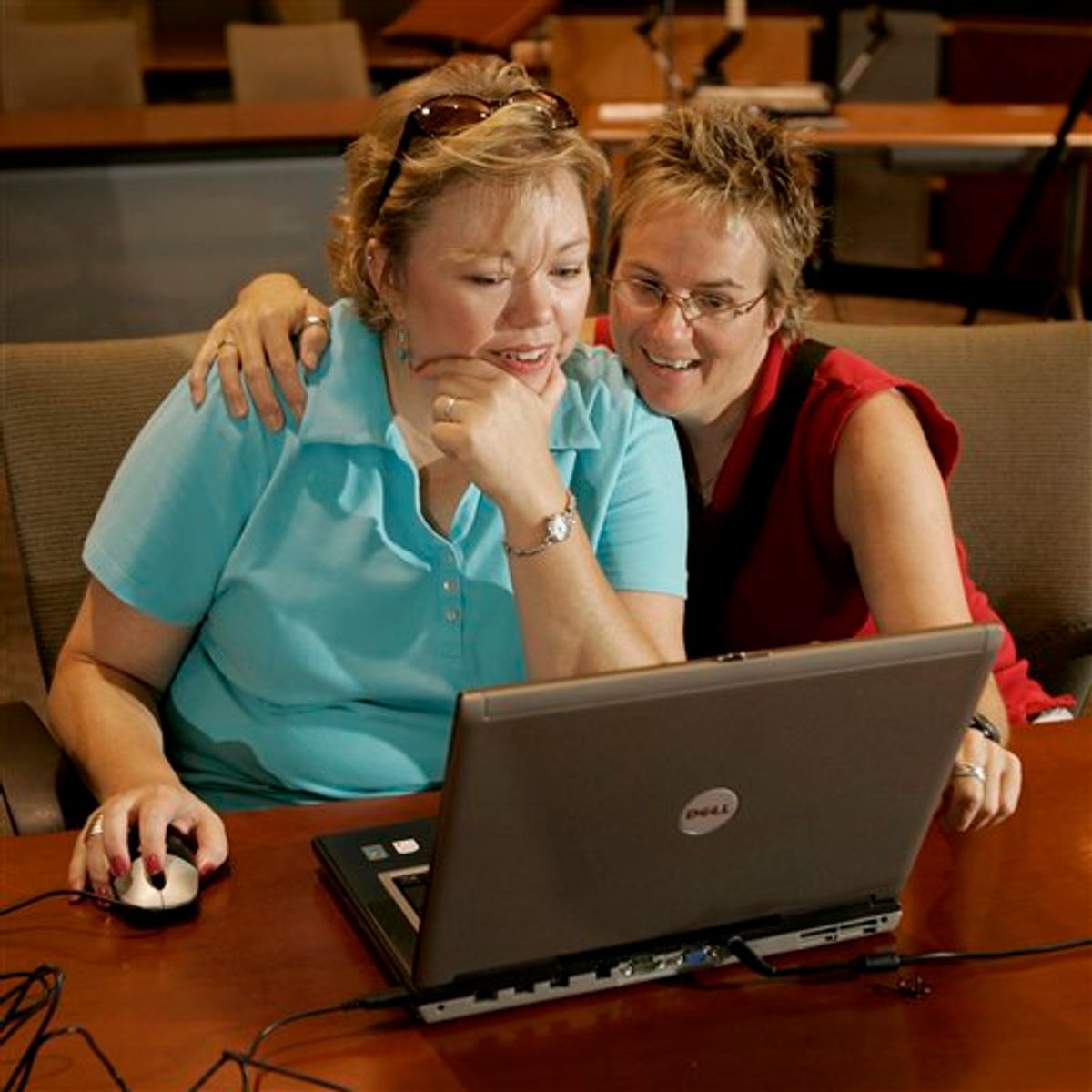 FILE - In this Aug. 1, 2007 file photo, Joyce Shontz, left, and Danita Long register as domestic partners at City Hall in Lawrence, Kan. Although fixing the economy is the top priority, Republicans who won greater control of state governments in the midterm elections are considering how to pursue action on a range of social issues, including abortion, gun rights and even divorce laws. In Kansas, the victory by gov.-elect Sam Brownback, a strong opponent of abortion and gay marriage, has created strong expectations among evangelical supporters. (AP Photo/Charlie Riedel, File) (AP)
--

The defenders of California's gay marriage ban took a pummeling during the first federal trial to explore the civil rights implications of outlawing same-sex marriages. They summoned only two witnesses, one of whom left the stand looking thrashed. Even the lead attorney was left groping for words when pressed to explain how allowing gays and lesbians to wed would undermine traditional unions.

If the courtroom had been a boxing ring, the referee would have called a TKO.

Yet lawyers for the ban's sponsors say their side was on the ropes for a reason: They disputed that live testimony and reams of evidence were relevant to a lawsuit against the voter-approved Proposition 8, so they did not provide it. In their view, the proceedings were a "a show trial," and they were willing to invite the unfavorable verdict they eventually got while betting they would win in a later round where the ground rules would be different.

"Something that has been lost sight of is who has the burden of proof in this case," Andrew Pugno, a lawyer for Proposition 8's sponsors, said at the 13-day-long trial's close. "The burden is not on the defendants and the people who voted for Prop 8."

That strategy's wisdom will be put to its first test Monday, when a federal appeals court is set to hear arguments in Perry v. Schwarzenegger, the landmark constitutional challenge to the gay marriage ban. The coalition of religious and conservative groups that won Proposition 8's passage two years ago has asked the 9th U.S. Circuit Court of Appeals to reverse the San Francisco judge who pointed to their "rather limited factual presentation" when he struck down the measure.

Despite the lopsided trial record, most legal experts agree the defense team's reasoning is not far-fetched. They say the three-judge panel randomly assigned the case could discount the exhaustive trial evidence Chief U.S. District Judge Vaughn Walker laid out in his August decision. In its place, the panel could substitute studies that were barely discussed in Walker's court or, more likely, its own interpretation of relevant case law.

"I can't say whether the case was litigated well or badly," said Eugene Volokh, a UCLA law school professor whose popular legal-affairs blog was inundated with comments from observers critical of the defense's trial performance. "If the question is whether they should have introduced more witnesses at trial, I'm skeptical it would have done any good. It certainly wasn't necessary, and I'm not sure it would have been at all helpful."

Proposition 8's supporters maintain Walker erred by employing "standard courtroom fact-finding" to a case that, unlike a criminal trial where a singular event is in dispute, hinged on broader questions of policy, tradition and legal precedent.

"The district court based its findings almost exclusively on an uncritical acceptance of the evidence submitted by plaintiffs' experts, and simply ignored virtually everything -- judicial authority, the works of eminent scholars past and present in all relevant academic fields, extensive historical and documentary evidence -- that ran counter to its conclusions," they wrote in their opening brief.

They also are hoping to persuade the appeals court panel that the lower court judge improperly demanded proof for their claim that permitting same-sex marriages would undermine marriage's "central animating societal purpose" of promoting responsible childbearing among men and women.

University of Pittsburgh law school professor Arthur Hellma said the stakes for gay marriage opponents rose this week with the selection of three judges to hear the appeal. Two are Democratic appointees, one among the court's most liberal members.

Even if they affirm Walker's ruling, Hellman said the appellate judges are unlikely to do so simply because the plaintiffs had presented 17 witnesses compared to the two defense witnesses.

"It is unlikely the court would consider itself bound and limited by what happened in the district court, that it could not go beyond the trial record," he said.

Walker made it clear he planned to assess the validity of hotly debated questions surrounding same-sex marriage based on what he heard in his courtroom. Are laws limiting marriage to a man and a woman based on prejudice or religion? How does denying gays and lesbians the right to wed affect children? Do people choose their sexual orientations?

Lawyers for the two same-sex couples who sued to overturn Proposition 8 offered testimony from the couples, political scientists, psychologists, a man who had been forced to undergo unsuccessfully therapy to become heterosexual and a Proposition 8 supporter summoned as a hostile witness.

The defense cross-examined those witnesses at length and introduced studies intended to undercut their accounts. But their witness list consisted of a political scientist who Walker later concluded was not an expert in gay and lesbian issues and a self-educated scholar on fatherhood whose opinions the judge dismissed.

Boston University family law professor Linda McClain said she thinks the decision "not to put on much of an evidentiary case" was an "imprudent litigation strategy."

McClain nonetheless notes that it would only take persuading two of the panel's members that Walker was wrong in concluding that marriage is a fundamental right under the U.S. Constitution for Proposition 8 to be preserved. If the 9th Circuit ends up agreeing that Proposition 8 is unconstitutional, the U.S. Supreme Court is expected to step into the case.

"In theory, basic rules on appeal would be the reviewing court should be very deferential to the trial court," she said. "But if they think it's more a matter of interpreting the Constitution, they may decide these extensive evidentiary findings are beside the point."

Lawyers who challenged Proposition 8 said the ban's supporters were unable to mount a more vigorous defense because it is indefensible to deny one group of citizens equality if it doesn't advance a legitimate purpose.