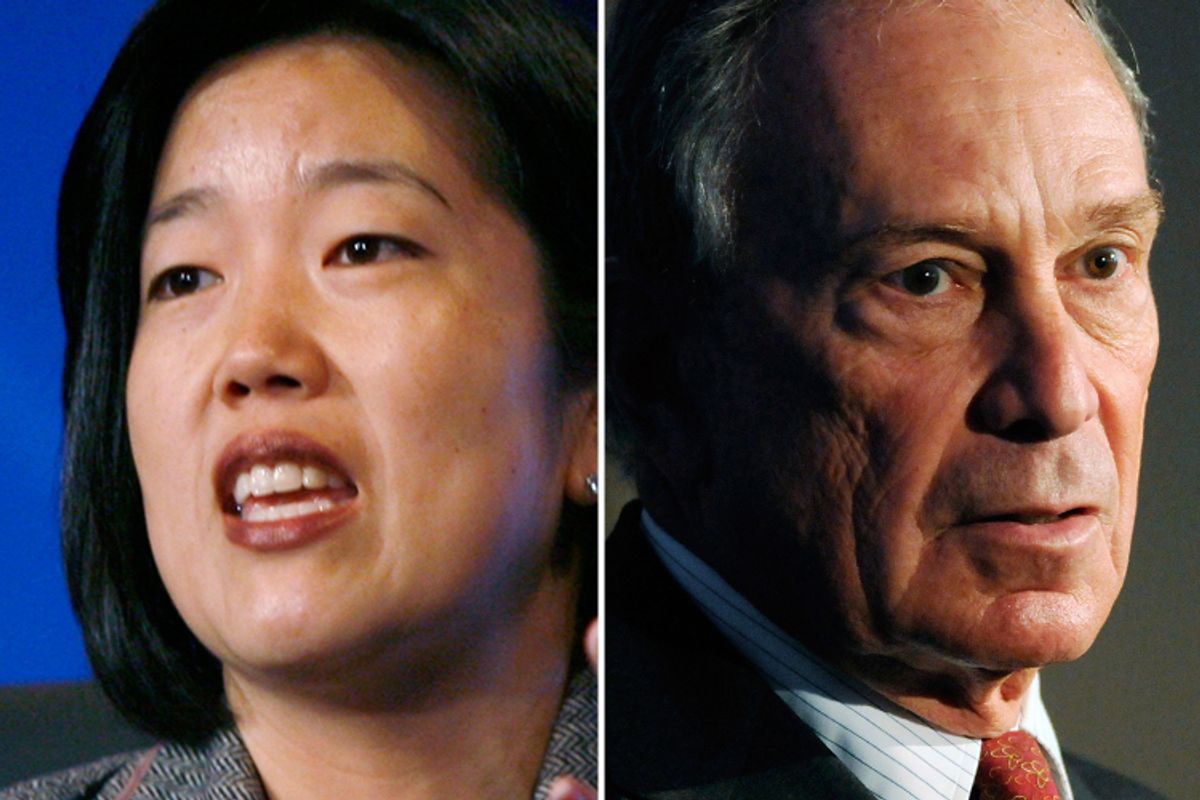 Exciting news on the post-partisan third-way "no labels" front: Michael Bloomberg just helped the Republicans probably take back the New York state Senate, and Michelle Rhee is on the cover of Newsweek.

Michael Bloomberg is the politically independent mayor of New York, beholden to no party and disdainful of partisanship. He used to be a Republican but all the rich Democrats in New York agreed for many years that he was not a for real Republican, because he doesn't hate Muslims or say incredibly boorish things like Giuliani did. And Mayor Mike does make a big show of endorsing people he likes from both parties. Meanwhile, his pocketbook tends to lean Republican.

The billionaire mayor gave at least $500,000 to the Senate GOP’s housekeeping committee, according to a source familiar with Bloomberg’s largesse. Another source pegged the final amount from the mayor to the Republicans at just under $1 million.

It’s a little hard to peg down the exact amount at this point because the party housekeeping accounts, which have no contribution limits and are thus the favored vehicles of deep-pocketed donors, are not required to file its next report until the middle of next month.

Why support the Republicans? Well, Bloomberg really hates Democratic Assembly Speaker Sheldon Silver. He hates Silver so much that he apparently did everything he could to return the Senate to Republicans, in order to make sure that legislative gridlock continues unabated in Albany, which probably means that various ostensible Bloomberg priorities like adequate funding for New York City transit and various social services are in trouble. Divided state government certainly makes it harder for incoming Governor Andrew Cuomo to deliver on his promise to get gay marriage legalized. But it will make it easier for incoming Governor Cuomo to take a hatchet to the state budget. Bloomberg supports gay marriage. But when it comes down to it, the "socially liberal, fiscally conservative" bumper-sticker crowd is always much more willing to cave on the "social" part than the "fiscal" part.

Meanwhile, Tina Brown's Newsweek gives its cover over to former D.C. Schools Chancellor Michelle Rhee, heroine of the elites, whose big cause is "education reform." Rhee and the education reformers argue that the public education crisis is not the result of entrenched poverty, growing racial and economic segregation in public schools, and a lack of resources -- no, the problem is teachers' unions, and the solution is to turn education over to the private sector (the ones who profit from charter schools). Well-meaning wealthy centrists love these guys, because they're not beholden to "special interests," which means "teachers" and "working people." (The interests of oligarchs are regular interests, just as serious moderate technocratic policy ideas nearly always support the economic interests of the ruling elite.)

In a stirring display of her commitment to this new post-partisan moment, Rhee is now working for incoming Republican Florida governor and Medicare-defrauding former healthcare executive Rick Scott. And she's launching an "advocacy organization" dedicated to helping our children by destroying the public employees unions, from the offices of a right-wing P.R. firm.

In conclusion, I'd like to announce that I am a serious Democrat who hates unions, wants to make the tax code more regressive, and thinks the private sector could more efficiently manage our schools, parks, and, let's say, bridges and tunnels. I am starting an advocacy group called "Commonsense American Solutions for Heroes." Mayor Mike and Maureen White, just make the check out to "CASH," and I'll see you on "Morning Joe."