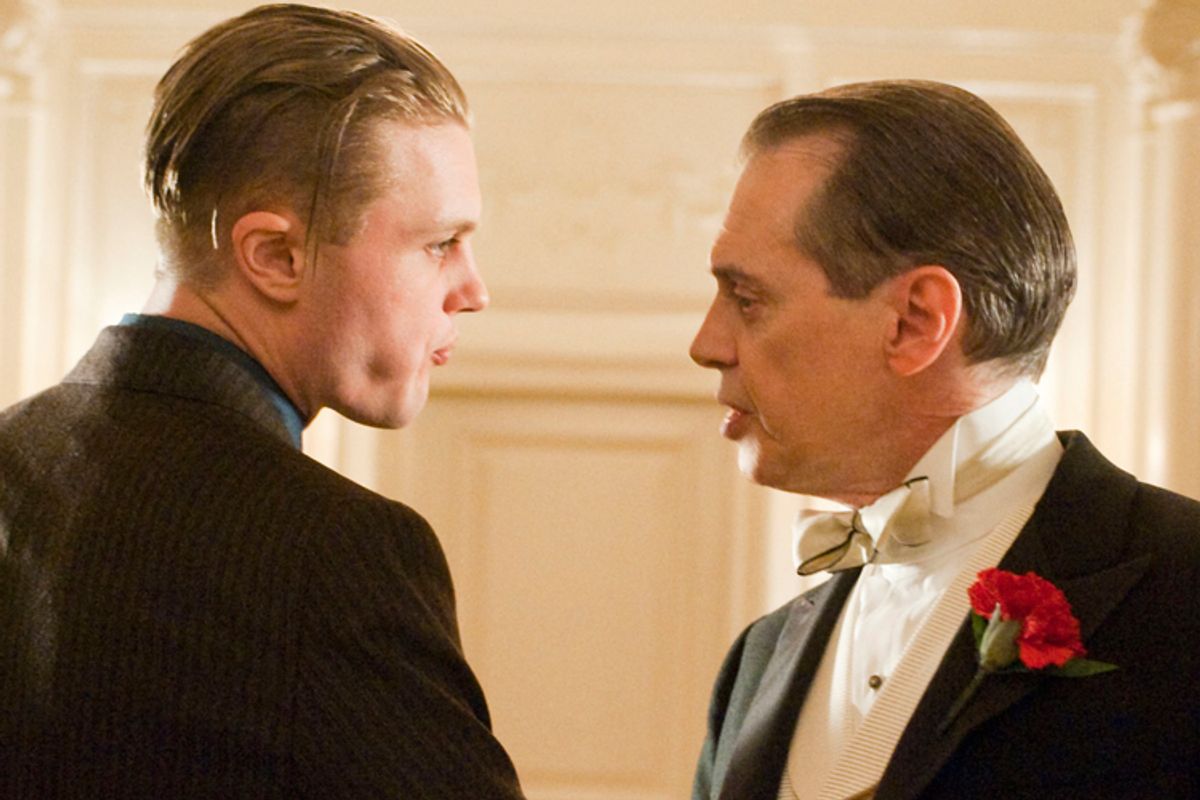 The title of "Boardwalk Empire’s" first-season finale, "A Return to Normalcy," comes from Warren G. Harding’s singularly uninspiring campaign slogan, one that nonetheless won him a record percentage of the popular vote from a populace looking to put the chaos of the Great War behind them. As it turned out, Harding’s promise of constancy was short-lived; although he died less than two years into his term, he managed to thoroughly corrupt the machinery of his office, presiding over the epic Teapot Dome scandal.

In Atlantic City, corruption is the normal state of affairs, but when the wheels are properly greased, it stays beneath the surface. It’s only when the waters are muddied that women are gunned down on the boardwalk and apprentice bakers turn up in fishing nets. Nucky Thompson rightly saw Prohibition as a king-sized business opportunity, but the booming business has brought unwanted rivals sniffing around. Now, with an election approaching and the season’s plotlines coming to a head, it’s time to settle scores and cut deals, so everyone can go back to getting rich.

Arnold Rothstein’s war with Nucky Thompson has been more a product of their mutual dislike than conflicting business interests, and with an indictment for fixing the World Series hanging over his head, Rothstein swallows hard and turns to Nucky, the one person he knows who can buy off a high-ranking official in Illinois. The move is suggested to him by Meyer Lansky and Lucky Luciano, who after having found themselves at the wrong end of Jimmy Darmody’s pistol have belatedly realized that backing the D’Alessio brothers was the wrong play. Johnny Torrio organizes a seaside summit, and he brings Al Capone (also of Brooklyn) along to help keep the peace. The last time this group of men were in each other’s company, they were joined by the late Jim Colosimo, whose lack of interest in the liquor business got him killed, a fact Lucky recalls with a crass remark. Al, in his grown man’s hat, tells him to stop acting like a kid.

Rothstein is able to put his animus aside only after a talking-to from his henchmen. On Nucky’s side, the dynamic is reversed. Nucky, pragmatic to the last, quickly sees the wisdom in burying the hatchet, although he makes it hurt, demanding a million dollars in cash from Rothstein as well as the location of the surviving D’Alessios. Jimmy is incredulous that Nucky can put a price on personal insult, but he’s learning that for Nucky, nothing — or at least very little — is personal. As they wait for the election returns to filter in, Jimmy confronts Nucky for acting as the Commodore’s procurer, delivering his 13-year-old mother to the old man and caring for their bastard offspring. What Jimmy took for love was merely duty, or perhaps guilt. Which was it, he asks Nucky. Nucky’s reply is laced with exasperation and contempt: "What difference does it make?"

It’s hard to understand sometimes how Nucky can be so casually cruel, especially to those who have made the mistake of getting close to him. But an answer, or at least part of one, comes to light after Margaret joins her fellow Catholics on a Halloween prayer walk through the cemetery and spies the single gravestone for Nucky’s wife and his six-day-old son. Since leaving Nucky, she’s been staying with Nan Britton, Harding’s tragically deluded mistress, and talking about leaving town, perhaps working in a shop in Margate. But she, who has lost two pregnancies herself, needs to know what happened, so she visits Nucky, and he tells her.

His story begins almost innocuously, with the birth of his frail and sickly son — an image that throws new light on the scenes from the pilot episode of him staring at the premature babies in storefront incubators. Having just been made treasurer, he was preoccupied with his work, and terrified to boot, so he stayed away, never laying hands on the baby until more than a week after his birth. When he finally did take the baby from his wife’s shoulder, he realized that the child had been dead for days, and she’d been caring for a corpse. Doctors said she only needed time to reconcile the loss, and although Nucky knew better, he says ruefully, "I was so very, very busy." A few week’s later, she slashed her wrists with his razor, lashing out at him with her final act.

That, of course, would explain Nucky’s attachment issues, his rage at Hans Schroeder for beating Margaret until she miscarried, and at her for using contraception, foreclosing the possibility that she and Nucky might have a child. As much as he resents Margaret’s intrusion in his affairs, he’s in love with her, or at least her family, and on some level would like nothing more than being compelled to take Hans Schroeder’s place.

Unfortunately, as the product of an abusive household himself, Nucky compulsively pushes away anyone who gets too close. Jimmy’s naked need for reassurance repulses him, and he recoils at his brother Eli’s assumption that the job of sheriff is his so long as Nucky rules the roost. Nobody gets anything for free, not even his flesh and blood. As soon as Nucky’s mayoral candidate is declared the winner, Nucky gets him to reinstate Eli as sheriff, only a few months after unceremoniously removing Eli from his post to make a show of cleaning house. In Nucky’s mind, that squares things, and Eli should understand that the occasional bump in the road is just the nature of politics. But whether or not Nucky had his law enforcement bait and switch planned from the beginning or not, he never let Eli in on the scheme, leaving him to twist in the wind until Nucky’s power base was solidified once again. Nucky’s actions leave a dangerous seed of resentment behind, one that will surely bear fruit. As the episode ends, Jimmy learns that Eli and the Commodore have been hatching a plan to knock Nucky off his throne, one whose details we’ll have to wait until the second season to learn.

Jimmy takes some of his frustrations out on an unlucky D’Alessio brother’s neck, cutting deep into the flesh and wiping his knife on the man’s shirt as he swiftly bleeds to death. Al and Richard Harrow dispatch the others, allowing Nucky to claim that the perpetrators of the woodland massacre that opened the season have finally been brought to justice. Agent Van Alden had Jimmy pegged for the crime, but he couldn’t make his case, and now he has other problems. After murdering his subordinate — a death we now learn is chalked up to a heart attack in the line of duty — he’s looking to get out of the city altogether, buying into his uncle’s feed business in Schenectady. His wife’s protestations have little effect, although she’s sly enough to remind him that fighting bootlegger’s is "doing God’s work," but when Lucy Danzinger shows up at his office claiming she’s carrying his baby, he may have found a reason to stay in town after all.

Van Alden may be "Boardwalk Empire’s" most tormented soul, or simply its most flagrant hypocrite, but he incarnates its governing principle that no one’s motives are pure, and that what we imagine as "normalcy" is merely a figment. The Commodore’s long-suffering maid turns out to be the one who was poisoning him, and the woman Angela Darmody took to be her fantasy lover has left her with only a postcard from Paris. They’re all hacking their way through the world, trying to get through life without losing themselves in the process. Good and evil coexist in each person, and even those who know them best know only a piece of them — a law that covers self-knowledge as well. "There’s a kindness in you," Margaret says to Nucky, as she attempts to reconcile his charitable bent with his most inhumane acts. "How can you do the things you do?" Nucky’s response is both credo and confession: "We all have to decide for ourselves how much sin we can live with."