How Obama can finish the job on DADT

Repeal foes may run out the clock this month, but the president has some powerful tools. Will he use them? 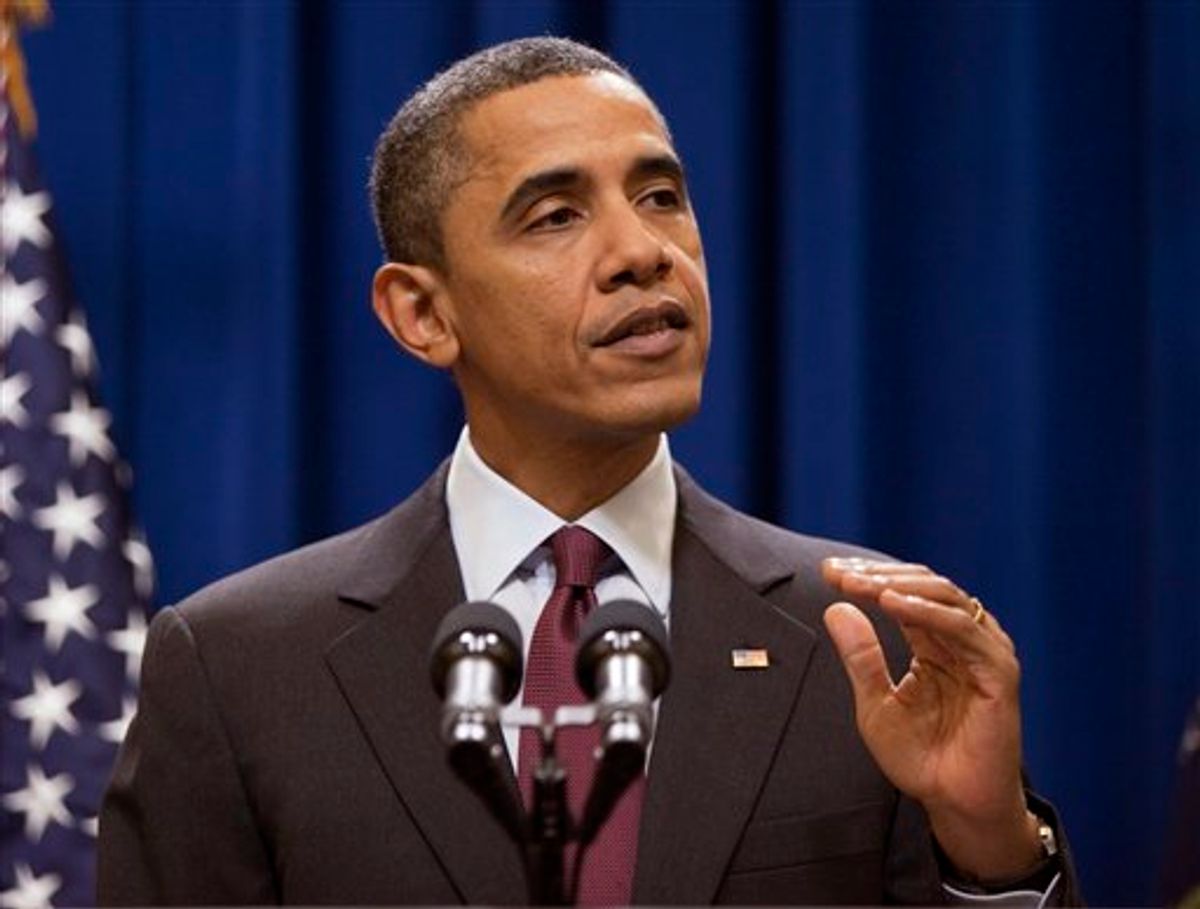 President Barack Obama gestures during a statement on the US-Korea Free Trade Agreement on Saturday, Dec. 4, 2010, in Washington. Obama said he isn't happy Senate Republicans blocked legislation Saturday that would have extended tax cuts for the middle-class, and that "we need to get this resolved and I'm confident we can do it." (AP Photo/Evan Vucci) (AP)
--

It’s fashionable to deride President Obama’s approach to ending the military’s "Don’t Ask, Don’t Tell" policy as too timid and incremental. After all, here we are at the end of his second full year in the White House, and a discriminatory policy that he vowed as a candidate to repeal -- and that a clear majority of Americans also want ended -- is still on the books.

But the past few days have in some ways validated the strategy he’s pursued. Since the Pentagon released its long-anticipated study of the issue last Tuesday, with a report that concluded that ending DADT carried little risk to military readiness, one Republican senator (Massachusetts’ Scott Brown) has changed his position to support repeal and another (Maine’s Susan Collins) has reaffirmed her support for repeal. Other Republican defections may follow. Illinois’ Mark Kirk, who voted against repeal in the House earlier this year and who was sworn in to the Senate two weeks ago, now says he will evaluate his position after reading the full report.

The small but not insignificant bloc of moderate (or somewhat moderate, at least) Republicans in the Senate has been boxed in. The exhaustive Pentagon study authoritatively demolishes every reasonable-seeming concern that can be raised about ending DADT. And the fact that Obama has shown such deference to military chiefs makes it impossible to portray his push to end the policy as an act of clueless social tinkering.

Republicans on Capitol Hill are under enormous pressure from their party base to oppose every item on the president’s agenda, and on most issues, moderate Republicans -- who might otherwise be willing to work with Obama -- have been able to find an excuse to do so. But DADT is a tougher issue, given that voters now see the policy as a counterproductive relic. The moderate Republican cop-out used to be that the policy needed to be reviewed carefully, lest repeal contain some ghastly national security implication. The Pentagon report takes the air out of this line. Brown had no choice but to announce his support for repeal. Collins had no choice but to reaffirm hers. And here’s guessing that Kirk, Olympia Snowe and a handful of other reluctant Republicans will be joining them in the days ahead.

But there’s a catch. When Brown made his announcement on Friday, his office also stressed that he still won’t join Democrats in ending a Republican-led filibuster of DADT repeal. Collins took the same position. Why? Because Senate Republicans, as a group, already pledged not to take action on any other initiatives in the lame duck session until and unless Obama and the Democrats cave on extending all of the Bush tax cuts.

After this weekend, when a Democratic effort to pass only a partial extension of the tax cuts (on income under $250,000), it now appears that the White House will relent on this issue, agreeing to an extension of all of the Bush cuts in exchange for more aid for the unemployed. But even if a tax deal can be hashed out and passed, there may not be enough time after that to take up DADT repeal during the lame duck session -- meaning that the issue would have to be revived in January, when Republicans will control the House and five more seats in the Senate.

Granted, if quick deal is reached on tax cuts, there may still be time to get to DADT. But let’s say this doesn’t happen -- that the GOP succeeds in running out the clock on 2010. Obama will still have gained some powerful tools from the past year: Republican senators publicly declaring that DADT needs to go, a Pentagon report that makes for a priceless talking point, and the good faith of military leaders, who watched him honor his commitment not to rush repeal.

The question is what Obama will do with these tools. Capitol Hill will be a far more conservative place in 2011, with the House filled with right-wing Republicans who don’t share Scott Brown’s fear of angering general election constituents who don’t like the DADT policy. It’s hard to imagine repeal getting through Congress under these conditions. In other words, the hope for repeal will rest with Obama himself: Would he then be willing to issue an executive order?

To date, he’s refused to do so, claiming that DADT took away his power to act unilaterally. Whether this is actually true is a matter of intense debate. Plenty of legal scholars believe Obama, as the commander in chief of the armed forces, is entirely within his power to decree that the military stop discriminating against gay and lesbian personnel. It’s understandable why Obama chose not to test this view this year; giving the Pentagon time to perform its study and showing military leaders that he was willing to be patient and to give Congress a chance to act was a sensible approach.

But if it becomes clear that Republicans in Congress, even those who say they support repeal, are committed to making excuses for keeping DADT intact, then Obama will have much more political cover for issuing an executive order. We’ve studied the issue to death, addressed every conceivable concern, and gotten the military’s leaders on board, he could say: If the Republicans won’t act, I will.

The knock on Obama, of course, is that he seems allergic to bold steps like this -- that if DADT repeal dies in Congress now, he’ll throw up his hands and say, “I tried my best” and leave it at that. And who knows – maybe that’s just what he’ll do. Then again, in the wake of the Pentagon report, the idea of ending DADT with an executive order may not seem nearly as radical as it did a few months ago. For Obama, it may just be the next logical step.