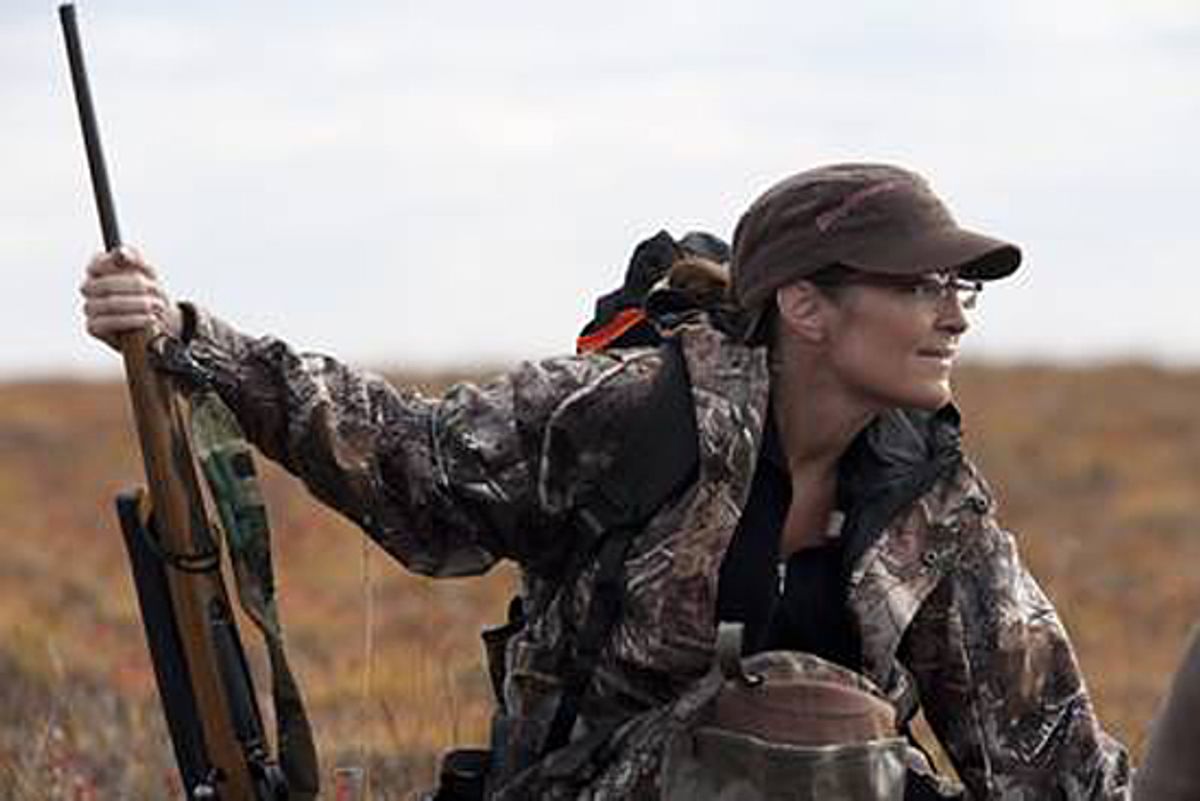 Sarah Palin hunts caribou near Juniper Creek, in the tundra north of the Arctic Circle.
--

Sarah's freezer is empty, so it's time to go a huntin'.

She explains how important this is for her family, because the key to their survival is making sure there is enough meat to tide them over for the winter. "The rifle in your hand could mean food on your table," she explains to us somberly, before throwing on her designer camouflage outfit and pink "Girls love Guns" baseball cap. Apparently the Palin's lost income from that abandoned governor gig has hit them hard.

Sarah made sure in this episode that we clearly understood how hard she was clinging to her guns and religion. She takes us into the wild Alaskan Tundra to a hunting camp 14 miles from a place called Kavik -- located north of the Arctic Circle. Kavik has a population of one, a hearty gal named Sue whose motto, "blood, guts and bullets," clues us into the fact that we're dealing with a real Mama Grizzly -- and not just because her head was chomped on by one a few years prior. "Here, feel this," she says, placing Sarah's fingers in the holes in her scalp where the bear tossed her around. She goes on to explain how she broke free, crawled back to camp and sewed her scalp back on -- presumably with the intestines of pansy Democrats she has squirreled away in her meat locker -- before passing out for ten days until a relief plane came to rescue her.

Sarah took the trip with her father, who for some reason refers to his daughter as "Sarah Palin" when he addresses the camera -- almost as if it's contractually obligated to do so. Dad is a jovial 72-year-old who doesn't sleep the night before the hunt because he's so excited in that adorable way that sweet old men can be -- except that this sweet old man has a bookcase full of 30 skulls of dead animals in his living room, arranged by size from Elk to baby rodent.  "Sarah Palin likes the varmint gun," he mentions to Becker as they prepare for the hunt.

And come day two, she is ready to go. She emerges from the tent, straps on the varmint rifle, ties her Loverboy-esque red bandana around her head, positions her designer sunglasses carefully and points to the horizon.

"Let's go west young man," she says to her father, one foot raised high to walk purposefully towards her goal. "Uh, west is that way," her father says, turning her to face the opposite direction.

Day two turns out to be more fruitful, as the hunting posse discovers a couple of caribou up yonder ridge. Everyone falls to the ground, including presumably the camera man, producer and sound guy from TLC. Sarah lines up her rifle and shoots. And shoots. And shoots again. And again. The caribou couldn't have been more unfazed by the goings on if he was flipping through a Vogue and filing his hooves -- perhaps sensing that Sarah might talk guns more than she actually uses them.

After riddling the untouched Alaskan mountain range with bullets, she finally decides to switch from the varmint gun to her father's big boy rifle and bags the cocky beast with the first shot. "It's such a feeling of accomplishment," she says to the camera before praying over its lifeless body and holding its head up by the antlers to snap a Facebook photo. And then the carnage begins as dad, Sarah and Becker carve up and bag the carcass to bring home to the family -- who at this point we've been led to believe are only surviving on the marrow of bones scavenged from the bottom of their compost pile.

Our camping trip ends as the hunters return to base camp to bid goodbye to Sue, who won't see another human being for nine months. "This is the part I hate," she says to Sarah, wiping a tear from her eye.

"I know, we don't like feelings either," Sarah says perkily.

"Hey, Sarah Palin, thanks for coming with me," her dad says as Sarah hops into the plane to be taken back to civilization, "it was good getting to know you again."

But Sarah has already moved on. "Let's get this bucket of bolts moving," her gesture indicates to the pilot, "it smells icky around here."

Back home, Sarah completes this week's lesson by showing us how she processes her kill by butchering and wrapping up the legs, hind meat and ribs for storage. "Here we are, filling the freezer like we set out to do," she tells us as the camera zooms in to reveal a freezer already filled to capacity -- presumably with the previous year's killings. She hesitates for a second before finding an empty spot on the door. Apparently some winters are tougher than others.