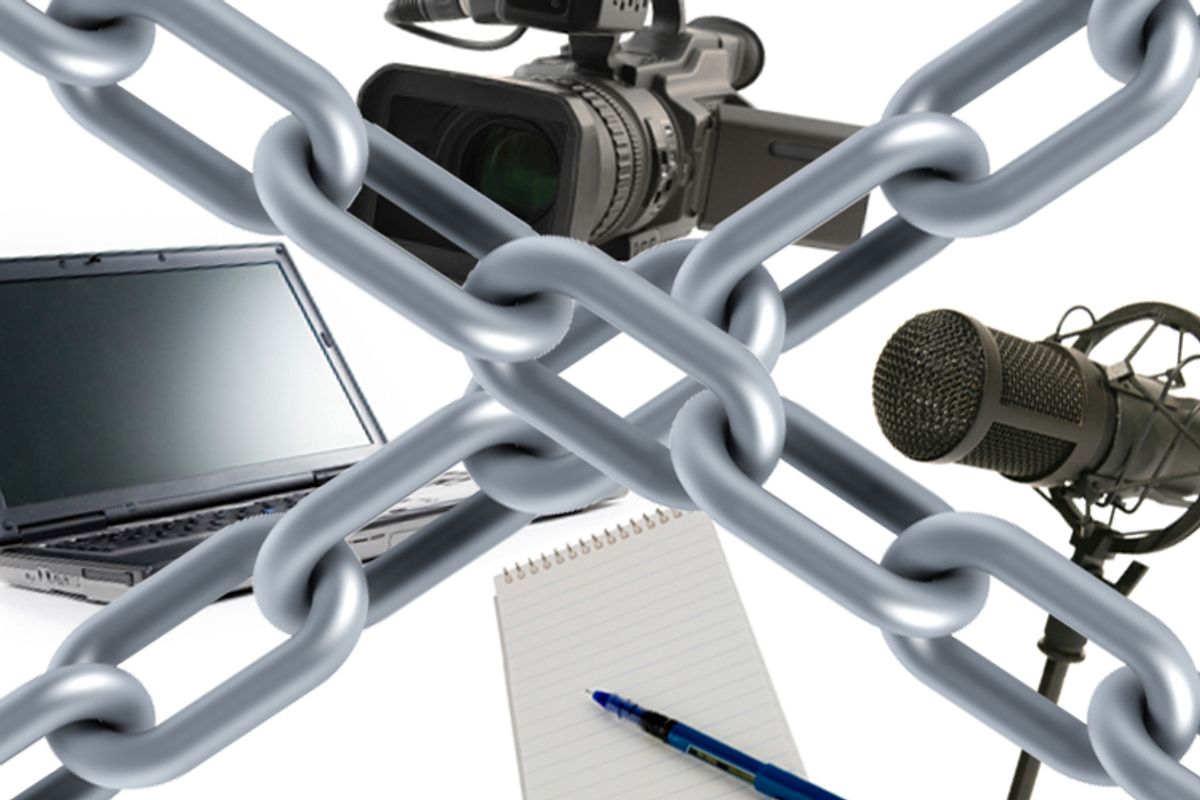 Journalists cover wars by not taking sides. But when the war is on free speech itself, neutrality is no longer an option.

The WikiLeaks releases are a pivotal moment in the future of journalism. They raise any number of ethical and legal issues for journalists, but one is becoming paramount.

As I said last week, and feel obliged to say again today, our government -- and its allies, willing or coerced, in foreign governments and corporations -- are waging a powerful war against freedom of speech.

WikiLeaks may well make us uncomfortable in some of what it does, though in general I believe it's done far more good than harm so far. We need to recognize, however, as Mathew Ingram wrote over the weekend, that "Like It or Not, WikiLeaks is a Media Entity." What our government is trying to do to WikiLeaks now is lawless in stunning ways, as Salon's Glenn Greenwald forcefully argued today.

These are also acts of outright censorship. No, Amazon is not bound by the First Amendment. But if it's bowing to government pressure, it's helping a panicked government tear up one of our most basic freedoms.

And, no, the government's campaign is not fully working. Internet "mirror" sites are springing up to host WikiLeaks' material faster than governments can take them down. But WikiLeaks is the beneficiary, in this respect, of a wide swath of support from people who will make it part of their life's mission to help prevent this particular instance of censorship from succeeding. How ready or able will they be to defend free speech every time it's threatened in the future?

The political class' frothing against WikiLeaks is to be expected, even if it's stirring up the kind of passion that almost always leads to bad outcomes. But what to make of the equally violent suggestions from people who call themselves journalists?

Two Washington Post columnists, among many others, have been racing to see who can be the more warmongering. The reliably bellicose Charles Krauthammer invited the U.S. government to kill Julian Assange, while his colleague Marc A. Thiessen was only slightly less bloodthirsty when he urged cyber attacks on WikiLeaks and any other sites that might be showing the leaked cables.

Of course, the New York Times, Washington Post and many other news organizations in the U.S. and other nations have published classified information themselves in the past -- many, many times -- without any help from WikiLeaks. Bob Woodward has practically made a career of publishing leaked information. By the same logic that the censors and their media acolytes are using against WikiLeaks, those organizations and lots of others could and should be subject to censorship as well. By Krauthammer's sick standards, the death squads should be converging soon on his own offices, as well as those of the Times and London's Guardian and more.

Media organizations with even half a clue need to recognize what is at stake at this point. It's more than immediate self-interest, namely their own ability to do their jobs. It's about the much more important result if they can't. If journalism can routinely be shut down the way the government wants to do this time, we'll have thrown out free speech in this lawless frenzy.

Like Clay Shirky, I'm deeply ambivalent about some of what WikiLeaks does, and what this affair portends. Governments need to keep some secrets, and laws matter. So does the First Amendment, and right now it's under an attack that could shred it.