Final week: Paul helps Frances forgive herself for her mistakes as he desperately tries to get in touch with Sunil 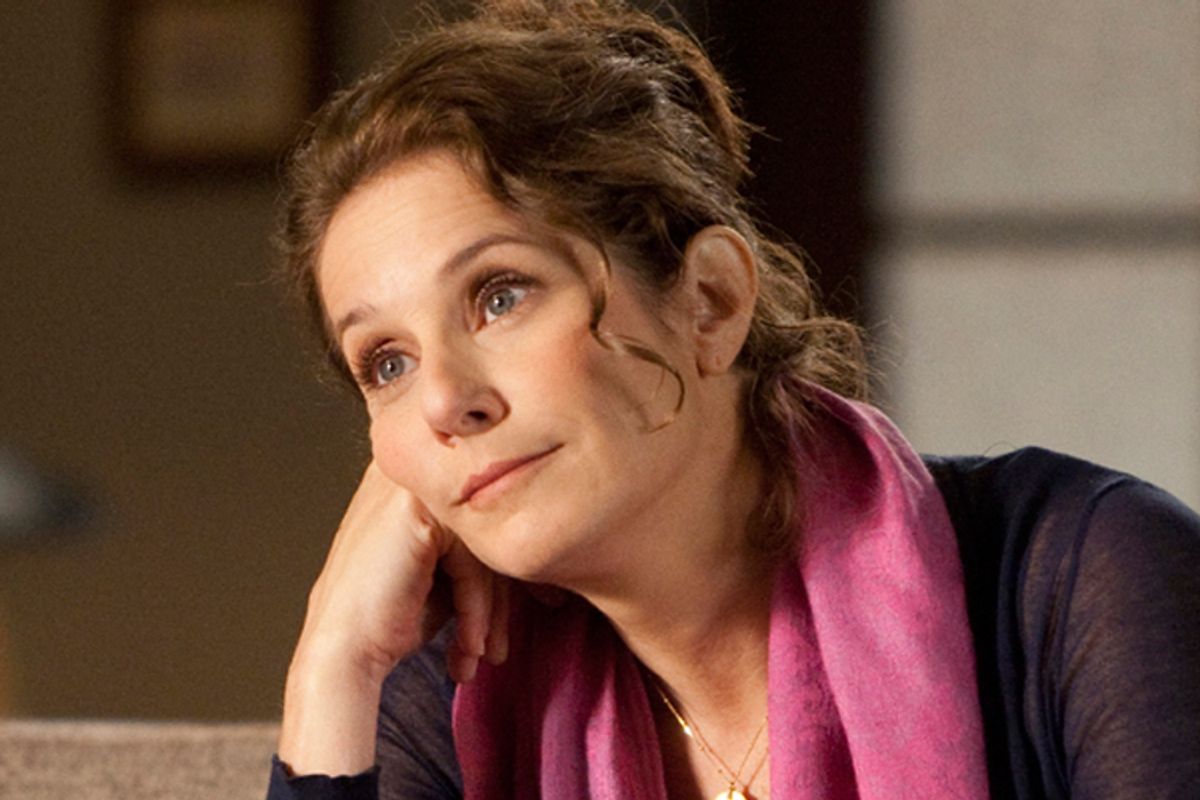 Debra Winger in "In Treatment"
--

As much as I've been anticipating the Sunil finale all week, I've also been dreading it. All season I've been resenting how our prejudices towards Sunil, the dark skinned stranger from a complex vaguely understood country, have been exploited and manipulated. I've grown fond of this character and it seemed to me there were only two ways for him to go, homicidal or suicidal -- dangerous or pathetic. Neither of these options could do honor to Irrfan Khan's fluid and fascinating performance. As it turns out, I was right to feel manipulated, but not for the reasons I expected. The first episode of Sunil's story was the lowest-rated premiere HBO has ever had. Whatever the ratings, the finale of his story was a tour de force.

As Monday night's episode opens, Paul is sitting in his office with his elaborate tea set, waiting for Sunil. He leaves message after message for Sunil and then Julia, but no one is getting back to him. So we begin this week instead with Frances. What a thankless job Debra Winger has taken on as Frances, the garden-variety narcissist. To add insult to injury her disorder has become so banal and over diagnosed that last week it was officially dumped from the Diagnostic and Statistical Manual of Mental  Disorders. And now no one really wants to hear about the poignant deathbed resolution with her sister because we're wondering where the hell Sunil is. This is too bad. The Frances finale is actually quite a subtle and moving examination of issues most of us will be facing at some point in our lives, if we haven't already -- how simple living wills are in theory, and how difficult they often are in practice.

Frances has made some decisions that have probably extended Patricia's life longer than Patricia might have wished. As a result she's on artificial respiration. Izzy is angry, and Frances is now torturing herself with guilt, and to her credit, significantly less self-pity than usual. Paul is really wonderful here, both empathetic and clearheaded. He's able to help her forgive herself, but get back on track, and this episode is a great reminder of what a good therapist he can be.

Frances is not a compelling character in her own right, but there is something compelling about the dynamic between her and Paul. Sure there have been some flirtations and fuzzy boundaries, but of his women patients so far, Frances is the one who he relates the most as a friend. They're the same age, they share so much -- divorce, grief, difficult children, and deep loneliness and unhappiness. There's something touching about the way Paul gets her through this crisis. Frances rephrases some of the questions she had last week. Is she a narcissist? Is she curable? These questions never get answered, but it doesn't seem to matter. What's important in this episode is life and death, and doing the best we can do with our faulty personalities. At the door Frances asks Paul if he was in love with Patricia. "I cared about her very deeply," he says. "She was a striking woman."  Obviously he would probably say the same about Frances.

Finally we return to Paul's office where he is now desperately trying to get in touch with Arun. According to Arun's secretary on Friday night Sunil was taken into custody and is now being held in a detention center. Paul goes to visit him and the Sunil who is led into the visitor's cubicle has a very different energy than the Sunil we've known in Paul's office. There's a depth and intensity to his gaze that is quite chilling, and it's hard to tell whether Sunil is happy to see Paul or not.

It turns out, after Paul called Julia to express his concern for her safety, Julia called the police to charge Sunil with assault over the bookcase-pushing incident. When Sunil refused to show the police his papers he was arrested. Both Julia and Arun seem to have abandoned him, and he is now awaiting deportation back to India. Paul is, needless to say, distressed. He offers to do what he can to clear up the situation, but Sunil refuses his help. Gradually it dawns on Paul that this has been Sunil's plan all along. After Arun refused to let him go back to India, Sunil hatched up a plan to convince Paul and Julia that he was dangerous. This was, tragically, not as difficult as it should have been. He knew that once he refused to supply his identification papers his deportation would be inevitable.

Paul is furious, in part because he's been used, in part because Sunil's plan seems to self-destructive, but also no doubt because he was so focused on Sunil and Julia's relationship, and what he imagined about it, that he never worked on what Sunil really needed: a realistic plan towards finding some dignity and community in this country.

Sure it would have been nice if Paul had taken a more practical approach and encouraged Sunil to join a cricket club, make some friends in the ex-pat community, or get some work as a math tutor. But there's a dignity to Sunil's craziness that's impossible not to enjoy. The price for his return to India, however, is the alienation of what is left of his family. He has probably lost his chance to ever see his grandchildren grow up. And when Paul mentions this it's hard not miss the deep pain in Sunil's eyes. But he can't live like this, infantilized, disrespected, under the control of a woman he so clearly loathes

There's serenity and an authenticity to him now, as though we're seeing him as he really is for the first time. "Something has opened in me," he says and Khan's performance here is magic. People will probably be arguing over Sunil's true intentions and speculating over his fate for years to come. We do find out that Malini was pregnant. Maybe Sunil will visit her family to make amends, or maybe he'll visit her watery grave. He's enough of a self-immolating romantic that it's easy to imagine him following her there. But he's also a canny survivor. "I've been voted off the island," he says to Paul at one point. As he sings the farewell song to Paul, an exotic, and heartbreaking gesture that shows both the strangeness and the strength of their connection, it's clear how deeply Sunil has changed Paul's sense of the world. He may have been banished, but he's very far from ever being forgotten.