She inspired us, even as we watched her stumble 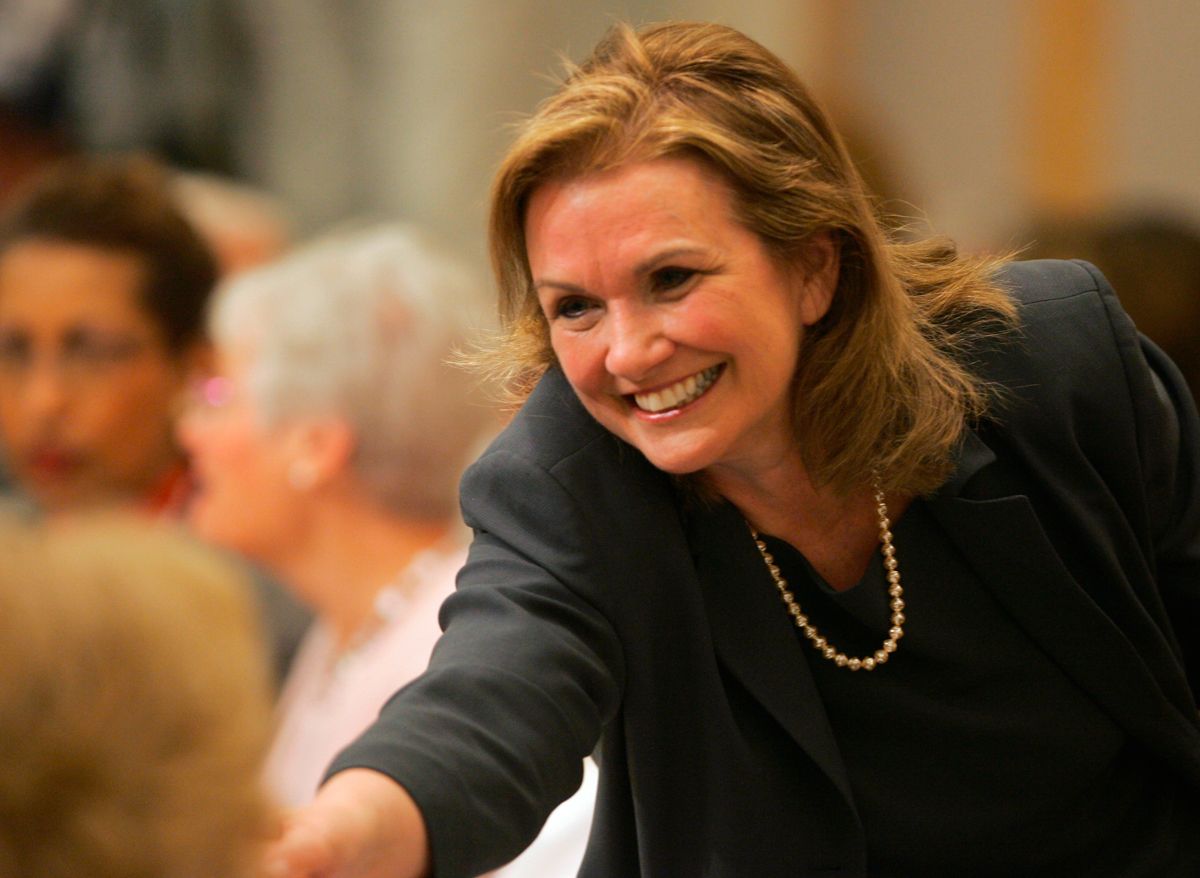 In this March 26, 2007 file photo, Elizabeth Edwards greets audience members after arriving for a speech in Cleveland.
--

She didn't deserve it. Any of it. But "deserve" is a concept humans invented to pretend life is fair, even when it isn't; even "fair" is one of our fairy tales.

Elizabeth Edwards, dead at 61, didn't deserve to bury her teenage son Wade, or to develop breast cancer after giving birth to two children at 48 and 50. She didn't deserve to have her husband flagrantly cheat on her, fathering a child (he denied for a time) with another woman, and she certainly didn't deserve to be transformed from the conscience of her family -- how many people back in the day thought the wrong Edwards was on the ballot? -- to being the harpy blamed for encouraging her husband's admittedly crazy decision to run for president even after she learned about his tacky, solipsistic affair (thanks, "Game Change!").

I admired Elizabeth Edwards enormously, even after I figured out she wasn't a saint. I watched her use her elbows to slam Hillary Clinton in a long interview with me back in July 2007 that made national news (especially after Matt Drudge distorted what she said with the irresistible headline: "Gender Bender: Wife Edwards Says Hillary 'Behaving Like a Man'").

Of course, she didn't say that, but what she said about Clinton was pretty rough. She empathized with her as a female trailblazer -- both women were lawyers -- but accused Clinton of being a less than adequate advocate for women, because she was intent on seeming "tough." Here's the whole quote:

"When I was a lawyer, I was the first female lawyer many people had ever seen. I had an obligation to my client to do the work right, but I thought constantly about my obligation to the women who came after me. If I didn't do a good job, they wouldn't get a chance to sit where I'm sitting. I think one of the things that make me so completely comfortable with [John Edwards running against Clinton] is that keeping that door open to women is actually more a policy of John's than Hillary's."

And she went on:

"Look, I'm sympathetic, because when I worked as a lawyer, I was the only woman in these rooms, too, and you want to reassure them you're as good as a man. And sometimes you feel you have to behave as a man and not talk about women's issues. I'm sympathetic -- she wants to be commander in chief. But she's just not as vocal a women's advocate as I want to see. John is."

What struck me, even at the time, was how much Edwards actually had in common with Hillary Clinton. Both women, a half-generation older than me, were brainy overachievers who had impressive careers at a time when it still seemed smarter to hitch their political star to a man rather than chase their own fortunes in politics. Of course, they would later share the public humiliation of their husbands' infidelity. Only one of them, Clinton, ever got to enjoy her own independent career, when time made it seem possible. Who knows what Edwards would have done if she hadn't gotten sick, but it has always seemed a terrible tragedy -- especially after her husband's moral and political flameout -- that the Edwards who was widely credited as the brains and the true progressive of the operation never got to be the candidate herself.

But it would be wrong merely to remember her in the context of what she didn't do, rather than what she did: She chose to leave her law practice after her son died, to burrow into her family and friends, to have two more children, and, yes, to devote herself to her husband's presidential ambition. I cannot kick a grieving John Edwards on this day, so I'll note that many of us, not just his wife, thought he had the best stands on poverty and inequality of all the 2008 candidates.

I'll also fondly remember the Elizabeth Edwards who blindsided the cruel Ann Coulter, phoning into "Hardball" to confront the conscience-free pundit who'd called her husband a "faggot" and mocked his handling of his son Wade's death by suggesting his car sported the bumper sticker, "Ask me about my son's death in a horrific car accident." "I'm the mother of that boy who died," Edwards said when she phoned in, and she reduced Coulter to a babbling ninny complaining that the candidate's wife was trying to stop her from selling books.

I made it a policy to refuse to do TV segments about the Edwards marriage or divorce last year, when Mark Halperin and John Heilemann published their ghoulish portrait of Edwards in "Game Change." Even the New York Times' Edwards obit repeats their central charge (while leaving out the book's most ugly, unsourced anecdotes): Among campaign aides, allegedly, "the nearly universal assessment was that there was no one on the national stage for whom the disparity between public image and private reality was vaster or more disturbing."

I said my piece about the book at the time; let me quote the Cleveland Plain Dealer's Connie Shultz, who wrote with the compassion Edwards deserved:

"If I were living Elizabeth Edwards' life, I'm not sure who I'd be by now, and that uncertainty is mighty humbling.

We want to believe the best about ourselves. We watch someone else stumble and insist we'd respond differently. But live long enough, and life will bring you to your knees. I have not buried a child. I do not have incurable cancer. I have not been betrayed by the man I love, never had to set eyes on the baby the entire world knows he fathered behind my back.

I know this: I would stumble forward in pieces."

Elizabeth Edwards stumbled forward in pieces, but pulled herself back together over the last year to face her life. She has visited her husband's young daughter, reportedly buying her Christmas gifts last year. She made a child whose existence she once denied part of her family. Her husband, from whom she separated last year, has been with her in her last days.

She shouldn't be remembered for her disappointing marriage, or just for her suffering, of too many sorts. Mary Elizabeth Williams said it all better than I can here.

She came, she saw, she played, she fought; she loved her children and her political career, such as it was, and her life.

At the end of our 2007 interview, I asked her whether she was bothered by critics who said she shouldn't have continued to campaign after her cancer recurred; she should have stayed home with her young children. Her answer can stand as her last word, again:

After all I've been through, I realize: You don't know exactly what life lessons you taught your kids until much later. You don't. And maybe the most important life lesson for them is for me to say, When bad things happen, you don't let them take you down. If I hadn't continued to campaign, I'd be sending the opposite message: When bad things happen, go hide. Do I know with absolute certainty we're doing the right thing? I don't. Having been through what I've been through, I hope people trust I wouldn't risk my relationship with my children. I think this is the right choice.