Despite a lack of credible evidence, WikiLeaks supporters -- including Naomi Wolf -- lash out at the alleged victim 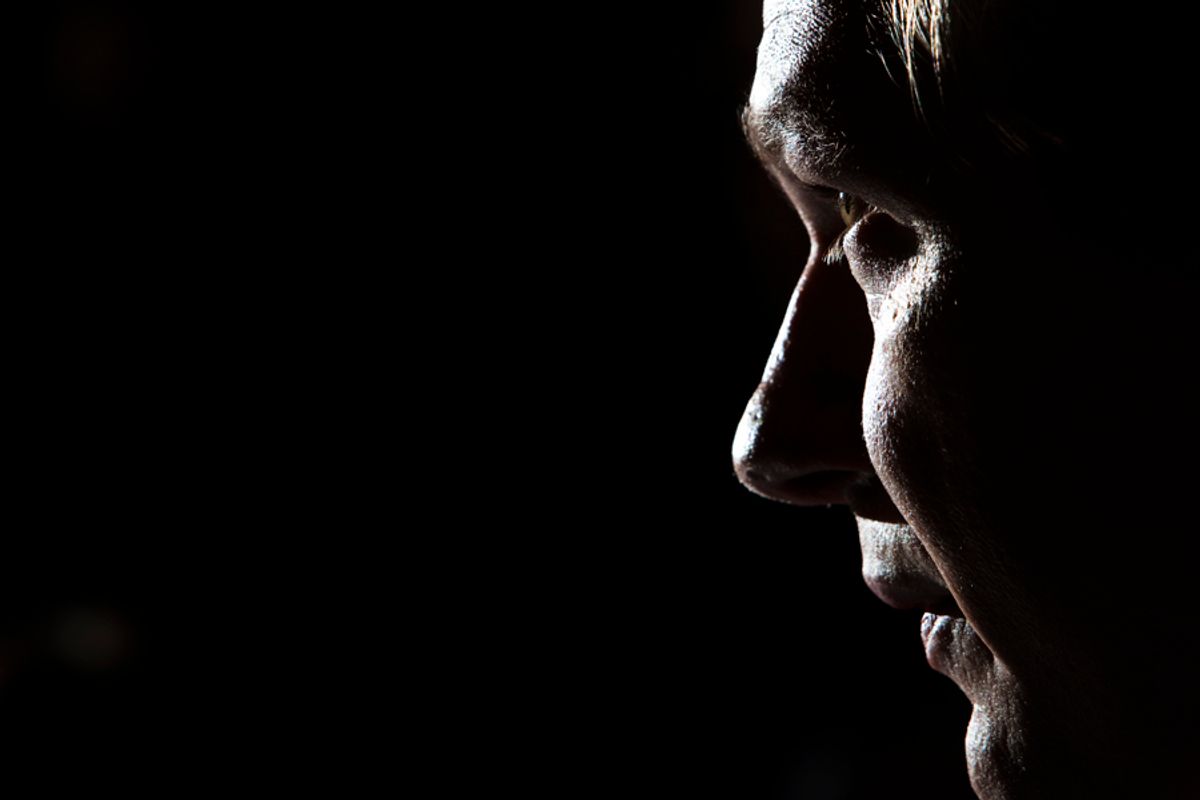 Julian Assange, founder of WikiLeaks, which has made public about 500,000 classified U.S. files on the wars in Iraq and Afghanistan, holds a news conference at the Geneva Press Club in Geneva, November 4, 2010, the day before the United Nation's Human Rights Council examines the U.S. human rights record in its universal periodic review programme. REUTERS/Valentin Flauraud (SWITZERLAND - Tags: MEDIA POLITICS IMAGES OF THE DAY) (Â© Valentin Flauraud / Reuters)
--

You don't have to be a conspiracy theorist to find the timing of Interpol's warrant for the arrest of WikiLeaks founder Julian Assange, who turned himself in to British authorities today, curious. The charges -- "one count of unlawful coercion, two counts of sexual molestation and one count of rape," according to a statement from Scotland Yard -- were brought against him in Sweden last August, yet he suddenly graduated to "most wanted" status just after releasing over a thousand leaked diplomatic cables in late November? It would be irresponsible of journalists, bloggers and average citizens of countries most eager to plug the gushing WikiLeaks not to wonder if those dots connect.

Still, as the New York Times put it, "there is no public evidence to suggest a connection," which some members of the public seem to find unbearably frustrating. With no specific target for their suspicions and no easy way to find one, folks all over the blogosphere have been settling for the next best thing: making light of the sexual assault charges and smearing one of the alleged victims.

By Sunday, when Keith Olbermann retweeted Bianca Jagger's link to a post about the accuser's supposed CIA ties -- complete with scare quotes around the word "rape" -- a narrative had clearly taken hold: Whatever Assange did, it sure wasn't rape-rape. All he did was fail to wear a rubber! And one woman who claims he assaulted her has serious credibility issues anyway. She threw a party in his honor after the fact and tried to pull down the incriminating tweets. Isn't that proof enough? The only reason the charges got traction is that, in the radical feminist utopia of Sweden under Queen Lisbeth Salander, if a woman doesn't have multiple orgasms during hetero sex, the man can be charged with rape. You didn't know?

As of today, even Naomi Wolf -- Naomi Effin' Wolf! -- has taken a public swipe at Assange's accusers, using her status as a "longtime feminist" to underscore the absurdity of "the alleged victims ... using feminist-inspired rhetoric and law to assuage what appears to be personal injured feelings."

Wow. Admittedly, I don't have as much experience being a feminist as Wolf has, but when I see a swarm of people with exactly zero direct access to the facts of a rape case loudly insisting that the accusation has no merit, I usually start to wonder about their credibility. And their sources.

Wolf links to exactly one, an article in British tabloid the Daily Mail. "Using a number of sources including leaked police interviews," writes Richard Pendlebury, "we can begin to piece together the sequence of events which led to Assange's liberty being threatened by Stockholm police rather than Washington, where already one U.S. politician has called on him to executed for 'spying'." Well! A reasonable person might be skeptical of information coming from a single anonymous source via a publication known for highly sensationalized reporting, sure, but in this case, there are a number of them.

That Daily Mail article also helped to inspire a Dec. 3 Gizmodo post in which Jesus Diaz boldy asserted, "While you can say Assange is a douchebag for not putting a condom on and continuing after the woman requested he use a condom, there was no rape accusation in both cases." The other source for that claim was an AOL News article that relied on (hey, look!) the same Daily Mail piece, a Swedish tabloid, and statements from Assange's lawyers to cobble together a theory of what happened and why Assange was charged. Rock solid!

To Diaz and Gizmodo's credit, they quickly posted an update upon learning that the Swedish prosecution office had "issued a notice saying that they are charging Assange with rape, sexual molestation and unlawful coercion." Diaz added, "Obviously, this is now a completely different issue altogether. Rape, sexual molestation and unlawful coercion are extremely grave accusations. This is not the 'sex by surprise' accusation that was discussed before." (I don't know that I'd go as far as "a completely different issue altogether" -- Feministe's Jill Filipovic wrote a terrific explanation of why "sex by surprise" actually is a pretty big deal -- but good on him for acknowledging that much.) Still, the notion that consensual, unprotected sex equals rape in Sweden (despite millions of Swedish fathers walking around free today) continues zipping around the Internet. One wonders if today's statement from Swedish authorities, which elaborates that Assange is accused of "using his body weight to hold [a woman] down in a sexual manner" and having intercourse with a sleeping woman, among other things, will even slow them down.

OK, so maybe the charges really are for rape-rape, but still -- the woman has CIA ties! I've read that on at least a dozen blogs! Keith Olbermann tweeted it and everything! That's got to be coming from a highly credible source, right?

Actually, as far as I can tell, the only source for that claim is an August Counterpunch article by Assange fanboys (seriously, they recast him as Neo of "The Matrix") Israel Shamir and Paul Bennett. Here's the most damning evidence Shamir and Bennett have compiled against Assange's accuser:

1) She's published "anti-Castro diatribes" in a Swedish-language publication that, according to an Oslo professor, Michael Seltzer (who?), is "connected with Union Liberal Cubana led by Carlos Alberto Montaner," who reportedly has CIA ties. Let me repeat that: She has been published in a journal that is connected with a group that is led by a guy with CIA ties. Says this one guy.

2) "In Cuba she interacted with the feminist anti-Castro group Las damas de blanco (the Ladies in White). This group receives US government funds and the convicted anti-communist terrorist Luis Posada Carriles is a friend and supporter." That link goes to an English translation of a Spanish article noting that at a march last spring, Posada "wander[ed] unleashed and un-vaccinated along Calle Ocho in Miami, marching alongside" -- wait for it -- "Gloria Estefan in support of the so-called Ladies in White." Apparently, it's "an established fact" that Posada and the Ladies also share a shady benefactor, which means he should clearly be called a "friend" of the organization, and this is totally relevant to the rape charges against Julian Assange, because the accuser once interacted with them in some manner.

3) The accuser is a known feminist who once wrote a blog post about getting revenge on men, and "was involved in Gender Studies in Uppsala University, in charge of gender equality in the Students' Union, a junior inquisitor of sorts."

Are you kidding me? That's what we're basing the "CIA ties" meme on? An article that reads like a screenplay treatment by a college freshman who's terrified of women? Actual quote: "[T]he Matrix plays dirty and lets loose a sex bomb upon our intrepid Neo. When you can't contest the message, you smear the messenger. Sweden is tailor-made for sending a young man into a honey trap."

Look, for all I know, Assange's primary accuser does have CIA ties. Perhaps it was all a setup from the beginning. Perhaps she is lying through her teeth about the rape. Anything is possible. But in the absence of any real evidence one way or another, we're choosing to believe these guys? Or at least this guy at Firedoglake, who says he's "spent much of [his] professional life as a psychiatrist helping women (and men) who are survivors of sexual violence" -- giving his post a shiny veneer of credibility, even though it's a pure regurgitation of Shamir and Bennett's -- but segues from there into an indictment of the accuser's post-rape behavior. She socialized with her attacker again! An expert like him can tell you that real victims never do that.

The fact is, we just don't know anything right now. Assange may be a rapist, or he may not. His accuser may be a spy or a liar or the heir to Valerie Solanas, or she might be a sexual assault victim who now also gets to enjoy having her name dragged through the mud, or all of the above. The charges against Assange may be retaliation for Cablegate or (cough) they may not.

Public evidence, as the Times noted, is scarce. So, it's heartening to see that in the absence of same, my fellow liberal bloggers are so eager to abandon any pretense of healthy skepticism and rush to discredit an alleged rape victim based on some tabloid articles and a feverish post by someone who is perhaps not the most trustworthy source. Well done, friends! What a fantastic show of research, critical thinking and, as always, respect for women.