Actually, it's a pretty good deal...

You can feel the left's rage, but Obama's decision to relent on the Bush tax cuts is a smart calculation 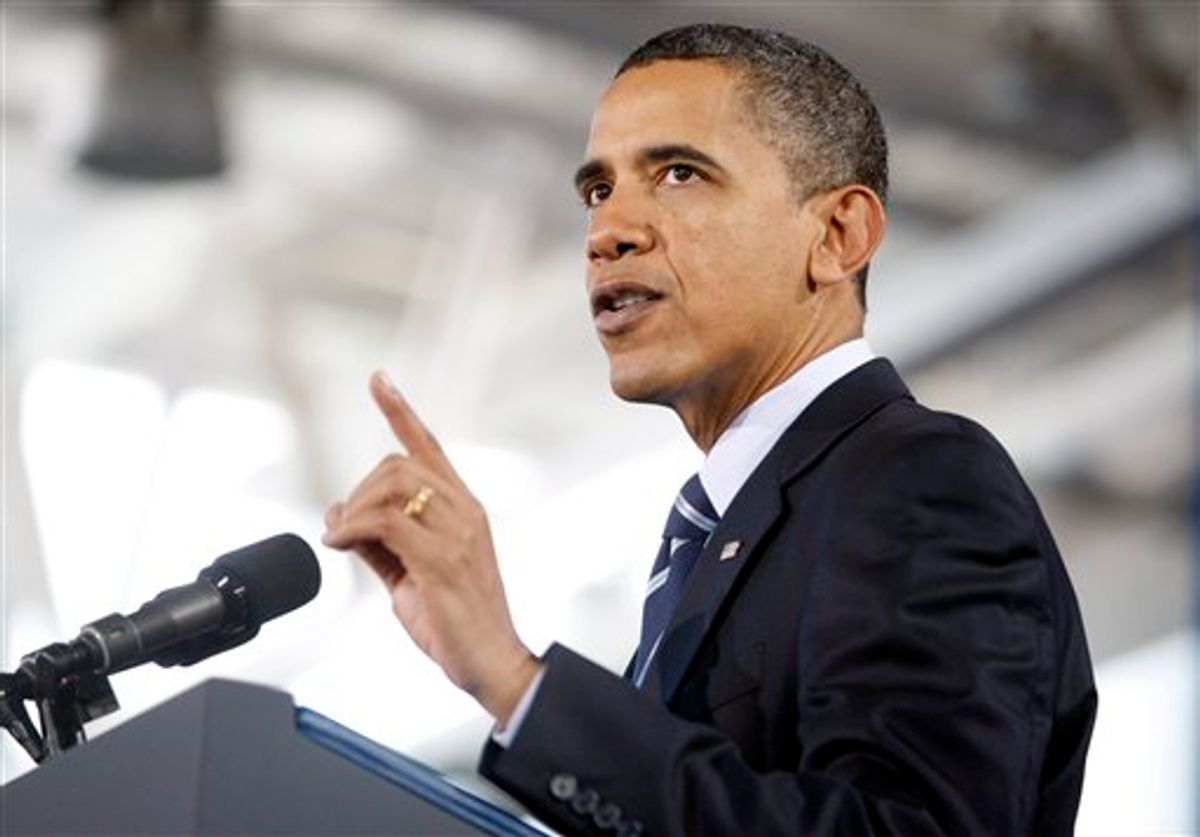 The obvious comparison that comes to mind, now that President Obama has officially relented on the GOP's insistence that all of the Bush tax cuts be extended, is to George H.W. Bush and his decision in 1990 to go back on his "No new taxes" campaign pledge.

Obama, after all, repeatedly promised in his 2008 campaign to restore the rates on upper-income tax brackets to their Clinton-era levels. As Dave Weigel noted on Monday, the contrast between the economic prosperity of the 1990s -- which played out despite dire warnings from Republicans that Clinton's 1993 push to hike rates on the wealthy would plunge the country into a recession -- and the modest-to-nonexistent boost that Bush's tax cuts provided last decade is for many Democrats a point of pride.

In this sense, it could be said that Obama, in agreeing to a compromise with GOP leaders that will extend all of the Bush tax cuts for two years in exchange for several stimulative concessions (and the prospect of two immediate legislative victories on unrelated subjects),  risks the same kind of congressional and grass-roots revolt that Bush faced when he reneged on "No new taxes" in '90.

That compromise, which pushed the highest marginal tax rate from 28 to 31 percent, ended up attracting just 66 Republican votes in the House and Senate (compared to 151 "no" votes) and ultimately provided Pat Buchanan with grist for his 1992 primary challenge to Bush. It also marked a key moment in the rise of Newt Gingrich, then the GOP's whip in the House, who broke with the White House and his fellow GOP congressional leaders to rally opposition to the compromise, cementing himself as the top Reagan conservative on Capitol Hill.

But look a little closer and you'll find good reason to doubt that Obama will face the same intraparty blowback. Sure, progressive activists are up in arms -- as they were when Obama compromised on the stimulus last year, and on healthcare, and at countless other points in his presidency. Their feelings are genuine, but it's also worth remembering that they're doing their job: using their voices to push a president from their party toward their policy goals. And it's also worth remembering that there's a clear disconnect between the loudest voices on the left -- the ones that have been branding Obama a sell0ut -- and rank-and-file Democratic voters, who still approve of the president's job performance at a rate of about 80 percent. Bill Clinton and Ronald Reagan weren't doing that well with their own bases at this same point in their presidencies.

Democrats, by and large, believe that Obama has been operating in good faith. This is different from the intense skepticism that Bush already faced from the GOP base, which remembered him as the moderate who blasted Reaganomics as "voodoo economics" in his 1980 presidential campaign, when he made his deal with the Democrats. In raising taxes in '90, Bush was confirming what the right had long suspected about him. Obama, though, has more wiggle room with his party's voters, which is why the concessions that he won from the GOP are so important. As part of the deal, expiring unemployment benefits for millions of Americans will be extended for 13 months. Just as important, there is now a real prospect that the Senate will act on repeal of the "don't ask, don't tell" policy and ratification of the START treaty before this month's lame duck session ends. Is extending tax cuts for the richest Americans (and blowing another hole in the deficit in the process) a steep price to pay for all of this? Absolutely. But that's politics: Obama took the best deal he could possibly get. And he got enough out of it that Democratic voters, who still like him enormously, can rationalize their way to supporting it (or at least not feeling betrayed by it) -- no matter how much grief Obama takes from liberal activists and commentators.

There's also a longer-term calculation at work. Note that the deal also includes a reduction in the Social Security payroll tax and an expansion of the earned income tax credit and the college tuition tax credit. This is on top of the extension in unemployment benefits. These measures have one thing in common: They are stimulative in nature. (So, for that matter, is the fact that middle-class Americans won't face a tax hike -- something that would have happened had Obama balked at the deal and played a long-term game of chicken with the GOP.) Granted, this isn't the type of stimulus that, by itself, will restore the economy to good health, but it will help -- and it's more than Obama was on course to get from the GOP. The compromise, in other words, gives Obama a chance to take further action to boost the economy and bring unemployment down -- and the more he can do that, the better his chances (and his party's chances) will be in 2012.

Bush made a similar calculation in '90, recognizing that the economy was heading in the wrong direction and that the bond markets wanted to see action on deficit reduction. Bush understood that a healthy economy was key to his reelection prospects in 1992, so he held his nose and raised taxes, in the name of taming the massive deficits created by the Reagan era. The fact that he ended up losing in 1992 did not discredit his calculation: The '90 budget accord, coupled with Clinton's '93 deficit reduction program, was a key element in the prosperity that would mark the middle and later years of the decade. It just took longer for the effect to be felt than Bush appreciated; on Election Day '92, voters still believed they were trapped in a hopeless recession.

Some of the most vocal liberals will argue that Obama should have refused this deal, dared the GOP to let all the tax cuts (and unemployment benefits for millions of Americans) expire, and used his bully pulpit to convince Americans that Republicans did it all in the name of protecting millionaires and billionaires from a tax hike. This wouldn't have worked, though. As the 2010 midterms demonstrated (hardly for the first time), when the economy is stalled, voters look for reasons to blame the man in charge -- whether it's logical or not. Obama is in no position to win a P.R. battle with the GOP right now. That's just reality, and on Monday, he dealt with reality and came away with the best compromise he could get.