The tax debate that never happened

Americans already pay historically low taxes. So why give the rich yet another break? 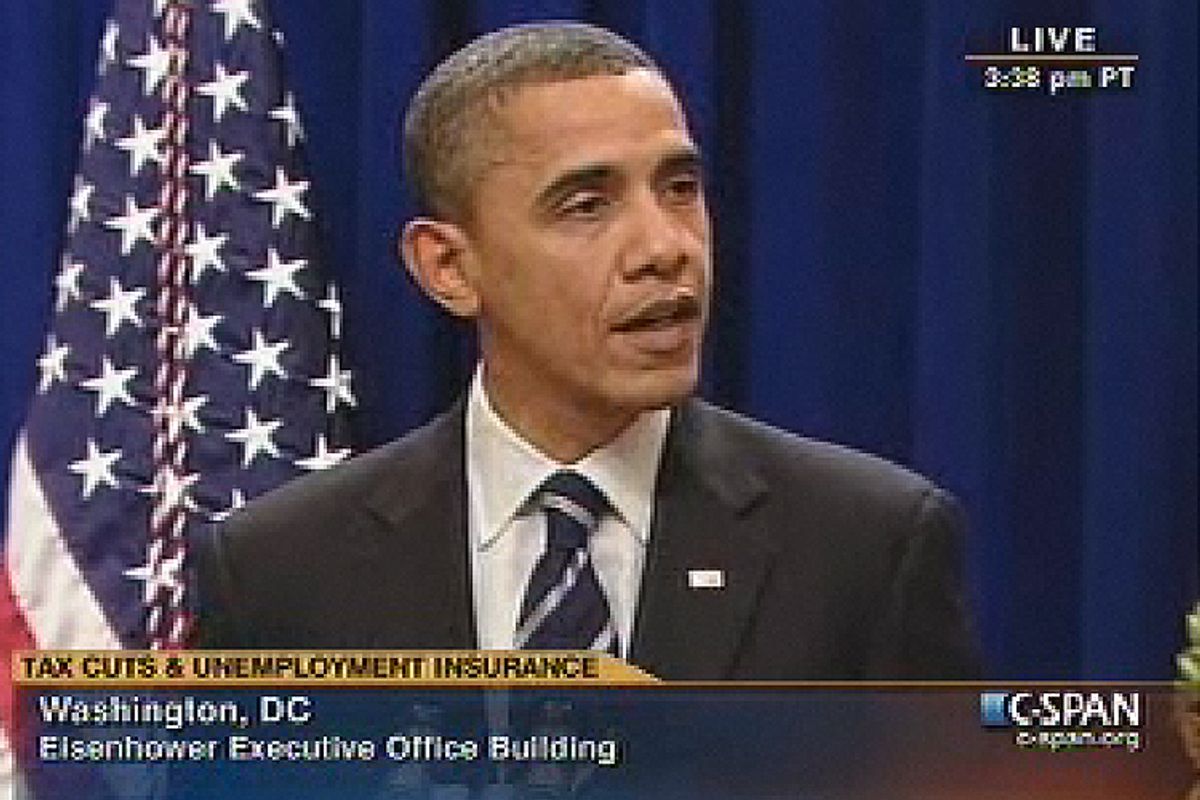 Looking tired and worn out, President Obama made a statement to the White House press on early Monday evening announcing his proposed tax cut "compromise" -- an agreement to extend all the Bush tax cuts for two more years in return for 13 months of unemployment benefits and bipartisan agreement on several other tax-related issues. He declared that "we cannot play politics when the American people are expecting us to solve problems," but he didn't look convinced by his own rhetoric. Since 2007, Obama has been campaigning on a platform that emphatically stressed allowing the Bush tax cuts for the wealthy to expire. Instead, he's been handed one of the worst defeats of his presidency, and his haggard face was a testament to the pain the White House is feeling.

There's no way to dress that up, but what's unfathomable at this point is how we got here in the first place. As a percentage of GDP, Americans are shouldering their lowest tax burden in 60 years. And yet Republicans are still able to make even the remotest prospect of tax hikes -- even when limited to the wealthiest Americans and even when government finances have been stretched absurdly beyond the breaking point -- a no-go zone in American politics.

A closer look at the recently concluded "debate" is instructive. Republican politicians are well aware that American voters aren't particularly receptive to the necessity of ensuring that the rich enjoy the lowest tax burden possible. That's why, throughout the rhetorical struggle over whether to extend the Bush tax cuts, they have preferred to stress the importance of protecting the livelihoods of "small business" entrepreneurs.

Plutocrats may have an image problem, but not the doughty man or woman trying to make payroll. At all costs, they must be kept safe from a "job-killing tax hike." According to Minority Whip Eric Cantor, if tax cuts for Americans earning more than $250,000 aren't extended, "roughly half of all small-business income in America will face a higher rate, making this tax increase a direct assault on job creation and innovation."

But a lot here depends on how you define "direct assault" and "job-killing." An analysis conducted by the Congressional Budget Office recently broke down the numbers and predicted that, at best, extending all the tax cuts would lower the U.S. unemployment rate by an additional 0.1 percent by the end of 2012, compared to merely extending the cuts for the middle class and under. That adds up to about 300,000 new jobs over the course of 24 months. Every new job is to be appreciated,  of course, but it still adds up to an increase that would, for all practical political intents and purposes, be virtually imperceptible to the general public.

Why the small number? The vast majority of small businesses do not generate enough profit to put their proprietors into the highest tax brackets. An analysis conducted by the Tax Policy Center concluded that only about 2.5 percent of the 36 million taxpayers who report some form of non-wage income that might indicate the operation of a small business -- around 900,000 people -- would pay higher taxes if the Bush tax cuts for the wealthy expire.

It is true, as Eric Cantor observed, that that 2.5 percent represents a disproportionate share of all small-business income -- around $400 billion, or almost half the total. But there is no firm data on how much of that $400 billion is actually generated by small businesses. The IRS lumps together all kinds of people into the same general category.

This kind of income could be reported from anyone who earned money from a source other than a regular job, such as consulting or public speaking. It could also be reported by those who make the most of their income from partnerships, such as law firms and medical practices. And it could include investors who have little involvement in the day-to-day operations of a company.

So what do we know about the impact of a tax hike for the wealthy on small businesses? Not much! We don't have any idea how many small businesses will be affected, although we're pretty sure it's not likely to make a big dent in unemployment, one way or the other.

But here's what we do know about Americans and taxes, thanks to a marvelous chart making the rounds of the Internet on Monday: Right now, federal taxes are the lowest they've been in 60 years. And over that time, the percentage of tax revenue paid by corporations has shrunk the most of any category, while the percentage paid by individuals as "employment taxes" -- which, as the ever-astute Felix Salmon points out, are the most regressive part of the tax structure, paid by rich and poor alike -- has gaped into an ever widening chasm. This state of affairs is, as Salmon observes, "not sustainable." We should not be quibbling about the data on small-business owners. We should not be making deals that gut the estate taxes or allow criminally low capital gains tax rates. The debate on taxes should be over. The U.S. is not heavily taxed.

One of these days, voters are going to wake up to this fact, because for the U.S. to live within its means on the budget that Republicans are dead-set on maintaining will require spending cuts that hurt almost everyone. Not the rich, of course. They'll do fine even if Social Security is scaled down and Medicare reimbursements slashed and public schoolteachers fired. But everyone else will learn, sooner or later, what happens to a great nation that refuses to pay its own way.