In jail, Assange gets phone calls but no Internet 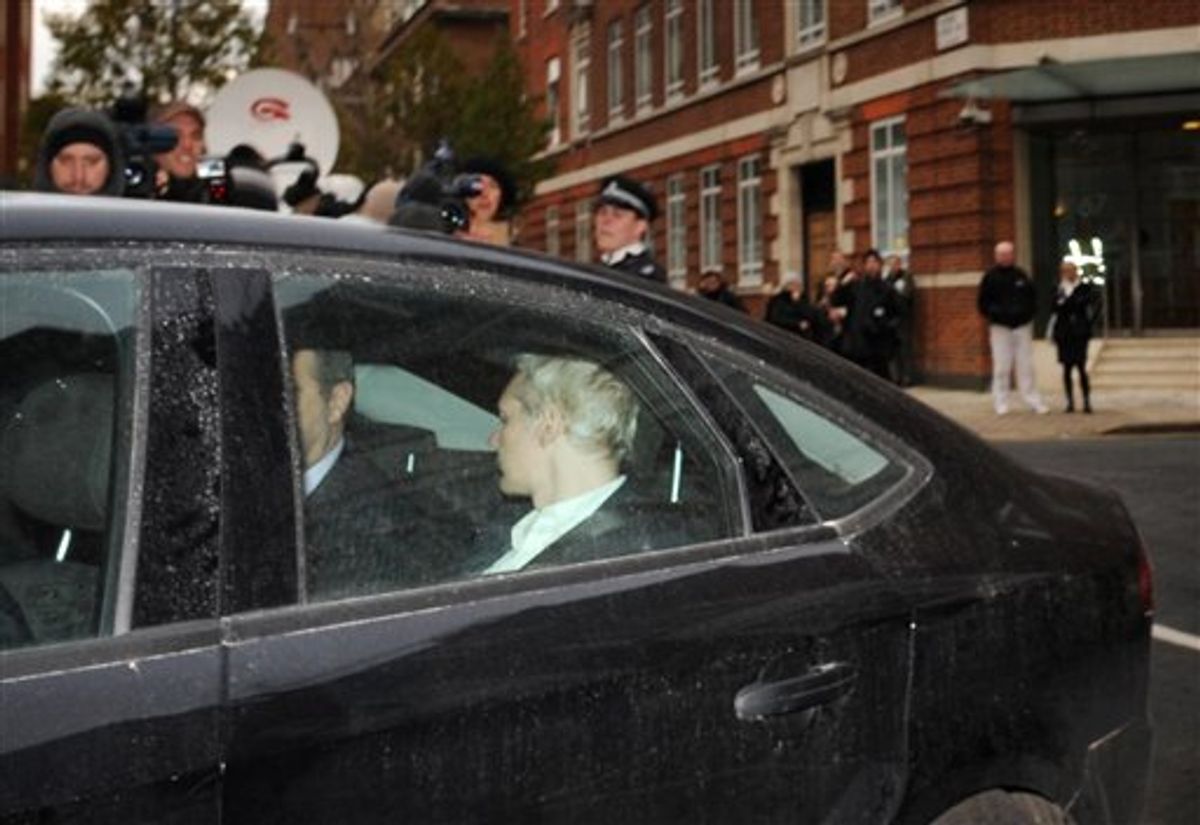 WikiLeaks founder Julian Assange, back to camera, is driven into Westminster Magistrates Court in London Tuesday Dec. 7, 2010 after being arrested on a European Arrest Warrant. Assange is appearing at the court for his extradition hearing for sexual assault allegations in Sweden.(AP Photo/ Stefan Rousseau/PA) UNITED KINGDOM OUT NO SALES NO ARCHIVE (AP)
--

Julian Assange, as you've surely heard, turned himself in to Scotland Yard early Tuesday and is now fighting efforts to extradite him to Sweden, where a warrant for his arrest on suspicion of sex crimes has been issued. He has been denied bail and is now in British custody awaiting what could be a lengthy set of legal proceedings.

We're not experts on British or Swedish law, so we asked Afua Hirsch, the Guardian's legal affairs correspondent, to help us understand the details of Assange's detainment, and what the various possible outcomes of all of this are.

Can you tell us where exactly Julian Assange is right now?

He's at a prison in the London area, and he is being kept in remand, which means he'll be under better conditions than if were serving a sentence, but he is in prison.

How long will he be there?

He will be there until his full extradition hearing, which is usually within 21 days, but his lawyers have said they're going to renew the bail application in a week, which means he'll have another shot at getting bail next week.

What's the facility like? For instance, is it high-security? Will he have an Internet connection?

He won't have an Internet connection, but he will be allowed visits and phone calls. As far as I know he's not being kept under particularly high security conditions, just usual prison conditions.

Is there any sense that he's getting special treatment (either overly harsh or overly lenient)? Is this the way any suspect facing the same charges would be treated -- for example, was it surprising that he was denied bail?

It's very difficult to get bail in rape cases -- domestic and extraditable rape offenses. The key issue in an extradition case is whether there's a risk that the person will abscond, and in Assange's case, he couldn't give a permanent address in the U.K., which is a major factor. Given that he doesn't have a permanent address in the U.K., he doesn't have very close community ties in the U.K., it's quite typical that they would refuse him bail. So, he's not being dealt with especially harshly. In court, the judge did seem to be leaning towards giving him bail, which is one reason why some people are very surprised that he hasn't been given it.

Are there any suspicions that the U.S. government has influenced proceedings so far? Is there any opening that would allow the U.S. to get involved?

Swedish prosecutors are adamant that there has been no involvement of any other government, that this is a standard Swedish rape case, and the judge in court today reiterated that this case is not about WikiLeaks, it's about a rape allegation. Having said that, Swedish experts I've spoken to said that they wouldn't rule out some kind of political motivation. Once he's being held in Sweden (if he is extradited), then there would be a possibility of extradition to the U.S. -- but only after Swedish proceedings have finished, so a full trial, if it goes that far, and if he's convicted he would have to serve his sentence in Sweden before there could be any talk of extradition to the U.S.

In general, how do people in Britain -- people in the media, as well as the general public -- view Assange, and the way he is being treated? Do people think he's been treated fairly?

The general consensus here is that there's some kind of conspiracy and that the rape allegation is being used for political motives. There's a lot of skepticism about the rape claim, particularly because it was initially made in August, and then it was dropped, and then it was reignited at the time when WikiLeaks became a political problem, so the general view here is of shock that the extradition proceedings have got this far. I have to say that I think that, in any case where a woman is alleging rape, there should be a degree of caution in dismissing those allegations, and from what Swedish experts tell me, it's not that uncommon for a rape case to be dropped and then to be restarted again -- it happens sometimes in rape cases. So I don't think it's a case closed, but it is suspicious. And I do think the alleged rape victims' being identified through the Internet is really worrying, because it's so important for rape complainants to be kept anonymous.

We keep hearing the unfamiliar phrase "sex by surprise" in relation to the sex crime allegations. Is this a normal term in the context of Swedish law?

Yes -- it's difficult to translate the Swedish rape law into English, but essentially, it's what's called a Category 2 rape offense in Sweden, which is fairly common, and it means having possibly consensual intercourse with somebody when they don't have full mental capacity. So it can be when they're asleep, for example, and it's thought that that is the rape allegation against Assange.

Finally: How do you think Assange's media prominence might influence his case going forward? As I understand it, there's not a jury system in Sweden -- so will this be an issue at all?

It's going to be a key argument his lawyers make when they're contesting the extradition. We have, in all European countries, the European Convention on Human Rights, which guarantees a fair trial, and his lawyers will say that he won't receive a fair trial because of the media attention in his case. I think that it will be complicated to make that argument, first because he's partly responsible for all the media attention around him, and second because, as you said, there's not a jury system in Sweden, and in this country most of the concern about media attention is centered on jury influence. So that won't be an issue in Sweden. But I think the argument from his lawyers will be more about the political climate of this case, and that it's very difficult for him to receive a fair trial, because everybody is aware of the political sensitivity around what he's doing.