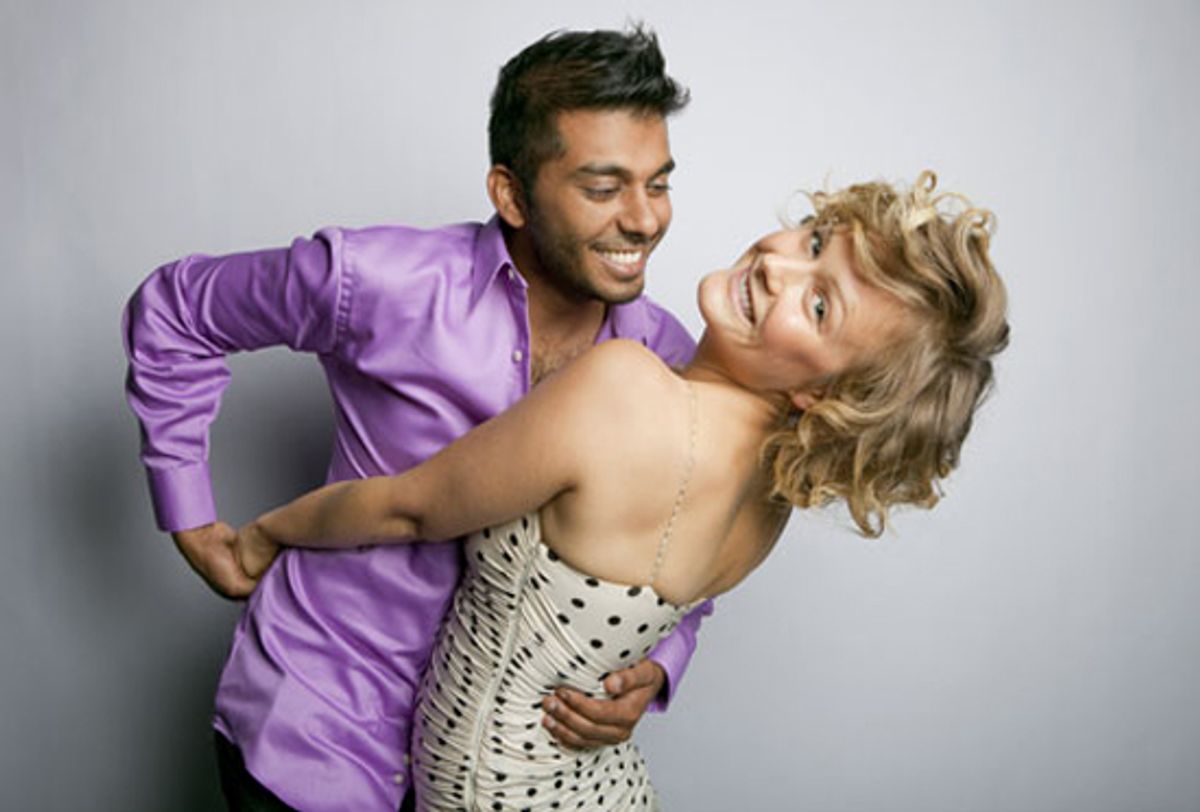 On Tuesday, the Sundance Channel debuted "Girls Who Like Boys Who Like Boys," a reality show about the enduring friendship between straight women and gay men. The half-hour show follows four duos in New York City as they navigate dating, marriage, family and, naturally, fashion. Anyone who has followed the proliferation of gay programming in the last two decades will not be surprised to hear the show is executive produced by Randy Barbato and Fenton Bailey ("Party Monster," "RuPaul's Drag Race," "Transamerican Love Story"), whose long career has chronicled countless aspects of gay life. To assess the premiere we enlisted real-life friends deputy arts editor Thomas Rogers (a gay man) and culture editor Sarah Hepola (a straight woman). Below is their discussion.

Sarah Hepola: First of all, I want to congratulate everyone for what must be the most unwieldy name in television history. It is the "supercalafragilisticexpealidocious" of reality show names. I know it's a line from a Blur song (and the name of a book), but my mind trips every time I say it. I never know when to stop: "Girls who like boys who like boys who have dogs who eat bones."

But so anyway: Welcome to the first show about fag hags, Thomas! This is a special moment for us. When I first heard about this show, I thought it was a smart idea, not only because it's an original premise in a genre that's maxed out on novelty but also because it's two demographics who really, really love to watch trash TV.

But watching the show, I felt ... bored? A little bit hungry? I just don't get the point, really. What's at stake here? This is the kind of reality show in which people "act normal" while the camera follows, but it's clear they're performing some off-camera directive in the attempt to create a narrative arc. Hey, my phone just rang. Who will it be? There is some minor drama: Will Nathan have a child? Will Sahil finally find love? Will the guy from the first segment -- umm, David? -- ever nurse his strained muscle back to health? I kept wondering: What is the point of this show? We need to vote someone off this island, stat.

As a straight woman -- a phrase I intend to employ repeatedly in this conversation -- I was pretty disappointed by the ladies. I felt so sad for Sarah, who fretted about being a spinster and kept talking about how she never got laid and seemed to actually resent her gay friend for getting engaged. ("I'm totally happy for you, but it should be me." Wow!) And Rosebud, the bohemian drama queen who fell in love with the subway performer and tries to get her friend Sahil out of his shell -- I mean, her name is Rosebud. They met in an "acting share circle." Maybe it's because I'm a true-blue fag hag, but I found the gay men way more memorable: Sahil, the self-hating gay man who was horrified at the thought of having a gay relationship. Nathan, who cried more than I do and wants a gayby.

So tell me: What stood out to you? Are you offended? And when are we going to go to SPLASH, the hot Manhattan joint that is clearly the place for Sundance Channel celebrities?

Thomas Rogers: I know I've written in the past about my problems with the "fag hag" stereotype. What's always offended me about that stereotypical relationship, especially following "Will & Grace," is the notion that the gay man gets turned into a commodity. The gay man allows women to feel exotic -- like they've suddenly found themselves an exciting pet or fancy outfit that will get them comp tickets to Broadway shows. That said, I had a hard time finding much to be offended by in this show. The women do seem to fit the stereotype of the traditional fag hag -- over the top, brassy, with strong personalities -- but the men, with the exception of Sahil, actually seem to be fairly well-rounded guys with healthy attitudes toward their gayness. I actually liked Joel (who wrote the book "Swish"), even though his friend Sarah, as you mentioned, kind of seems like a selfish nightmare.

As a gay man -- a phrase I intend to use a lot in this conversation -- I was mostly thinking about this show in the context of "The A List," Logo's partly tragic and partly amazing reality show about a group of really bitchy and really fake gay men living in New York City. "The A-List" was all about celebrating a kind of gay male world that's becoming very outdated -- highly primped, self-ghettoized muscle queens who spend their lives going out to fancy clubs and getting collagen injections so they'll look extra fabulous for their drag parties. It was such an insanely surreal depiction of gayness that it became hard to be offended by it -- because it was like watching robots that had taken over the bodies of gay men.

The people on "Girls Who Like Boys Who Like Boys" seem considerably more sincere and actually identifiable. For one, they actually look like real people -- none of the men appear to have taken steroids, and they might actually have a few brain cells. The downside to that is, as you mentioned, there doesn't seem to be much dramatic tension to this show. The pilot doesn't really have many identifiable plotlines. The takeaway is that gay men and their female friends are both terribly kooky and potentially unstable (and are both really bad at exercising).

Sarah Hepola: Hmm, let me see. There's a scene where Rosebud and Sahil get in a fight, and they're really antic and heated. Actually, I think all the couples bicker at some point, and that felt familiar. I'm a pretty argumentative person, but when I was younger, it was easier for me to show that difficult, disagreeable side to gay men, because of some dopey unconscious teenage idea that arguing with guys I'm crushing on would be horribly unsexy (when actually, the opposite is true). I'm also sure I've had gay friends who have tried to dress me better -- although to be fair, I've had straight male friends who have tried to dress me better, too.

I also relate to the scene in the club where Sahil and Rosebud are sort of staring at this sculpted go-go dancer and talking about what they do and don't like about his body. For women, that's such a bizarre moment, because you're so accustomed to seeing women dancing on that pedestal that it's a relief not to feel any competition or personal sense of failure. At the same time, I always felt queasy there, like I was treating this man like meat. And usually the men I was with had none of those mixed emotions.

What about you? Anything ring true? Did you have a favorite character?

Thomas Rogers: I think the most identifiable character was probably Joel, the writer, just because he actually seemed to be fairly smart and have a sense of humor (like when he lists the virtues of his boyfriend as "he's a psychiatrist, he's a top and he loves me ... and he's a top"). But if anything, the show reminded me a lot of my relationships with straight girls when I was a teenager, and in my first years of college, when I was still having a harder time differentiating between people who are cool and interesting, and people who are just generally kind of insane, since a lot of the women strike me as being somewhat shrill and a little bit unhinged.

Sahil seems quite tragic, since he clearly doesn't seem comfortable with his sexuality, but I identified with him standing outside a horrible gay club and feeling like he won't belong because he doesn't look like a bodybuilder. (Though I'm also confused why somebody who claims to be in the closet would agree to be in a reality show, and the fact that he seems to be an aspiring actor makes me suspicious.) Overall, though, I can't say I'm terribly invested with too many of these folks. I also resented the way the show milked Nathan's emotions for laughs (he cries repeatedly over, for example, happy birthday wishes). Maybe at some point gay men and their straight female friends will get a decent reality show -- it's certainly a loaded and interesting topic -- but I don't think this is going to be the one.

Sarah Hepola: I agree. It's too superficial and not terribly honest. I can't imagine it will get much play. This is obviously the "Who Wants to Marry a Millionaire?" misfire of gay male-straight female reality shows. Thomas, you and I need to hold out for our "Survivor."