Why the tax cut deal rebellion will fail

In this game of high-stakes poker, the longer the game goes on, the better the Republican hand becomes 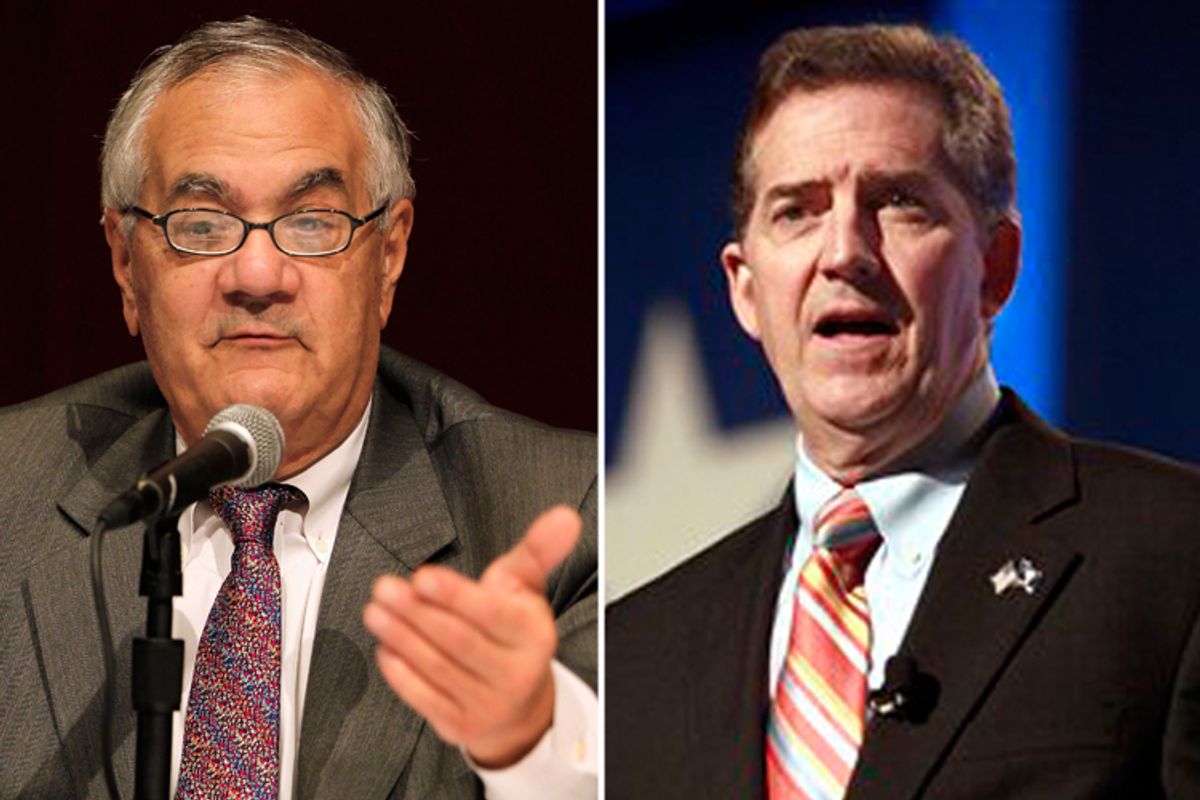 On the other side of the ideological spectrum, Massachusetts' Barney Frank said he also plans to vote against the deal, because he thinks that the "cap is too high and the rate too low" on the estate tax. ("Death tax" is Republicanese for "estate tax.")

Haven't we seen this play before? The hard right declares an Obama initiative is too liberal, the hard left declares it too conservative, the president himself defends his accomplishments as the best that can be achieved given the hard and depressing math of Senate vote number-crunching. The stimulus, healthcare, bank reform -- and now tax cuts. It's the same story every time. If there's one thing we know for sure after two years of incredibly uninspiring legislative sausage-making it's that pragmatism doesn't win you a lot of plaudits.

There's been a flurry of analysis suggesting that the proper way to look at this deal is as the best economic stimulus the White House could buy given the current political reality. If you are taking the "long view," as Obama professed during his press conference on Tuesday, then there is no more important objective than increasing economic growth. In this view, drawing a line in the sand -- sacrificing the entire package of payroll tax cuts and unemployment benefits and small-business tax incentives -- in an effort to live up to campaign promises and raise taxes on the rich would not achieve the one thing that Democrats of all stripes need most in order to fare well in the 2012 elections: a healthy economy.

All this could be true, but won't go far toward assuaging the pain felt by progressives who were counting on a much better deal -- who took seriously those years of campaign promises, and are driven crazy by the fact that the unpopularity of tax cuts for the rich can't translate into political reality. The presumption that what we have now is the best that the White House could get is predicated on the belief that Republicans would not cave if Obama called their bluff. But we'll never know, because the White House never made that threat. As Obama said on Tuesday, the safety of the hostages -- the middle-class tax cuts -- was too important to play poker with.

But now progressives are hoping that a strange fellowship of rebellious conservatives and progressives will call the bluff on their own. There's all kinds of speculation as to whether there are enough votes in the Senate and House to pass the deal. Democrats have a laundry list of improvements that they'd like to see -- the most important of which is probably an agreement to raise the debt ceiling, in order to avoid another hostage crisis a few months down the line.

We're set for a few days of drama and high-pitched rhetoric, but I'll bet that just as with the stimulus, healthcare and bank reform, this deal squeaks through also. In the Senate, Jim DeMint and Bernie Sanders may vote no or even filibuster, but it shouldn't be that hard to find 18 or 20 Democrats who will join with Republicans to reach 60. In the House, it will be tight, perhaps down to a vote or two, but it will pass.

Why? Because Nancy Pelosi may be disappointed, but she's not dumb. And she can count as well as anyone. If a coalition of Democrats and Republicans bust this tax deal, the only thing the Republican leadership has to do is wait a couple of months. When John Boehner takes over the House and the Democratic Senate majority drops by another handful, we're going to see congressional Republicans cook up a much worse deal and send it to the White House. At that point, Obama's only option will be to veto the legislation, and lead the nation into complete complete political gridlock while taxes rise for everyone and hundreds of thousands of people lose their unemployment benefits.

But Obama has already made it abundantly clear that he won't embrace that kind of showdown. We can be charitable and defend him by saying that it's almost certainly not in the best interests of the economy to bring government to a halt, throw people off the unemployment rolls and institute a broad-based tax increase right now, or we can savage him for not accepting that risk and doing everything he can to box in Republicans as the party playing extortion games with American livelihoods. But no matter what we think, Republican leverage only grows as we get closer to the new Congress. The chances that a tax cut deal gets worse seem far higher than that it gets better.