The night a Santana brother conned me

We met on a plane to Dallas and partied like celebrities. Then I woke up the next morning 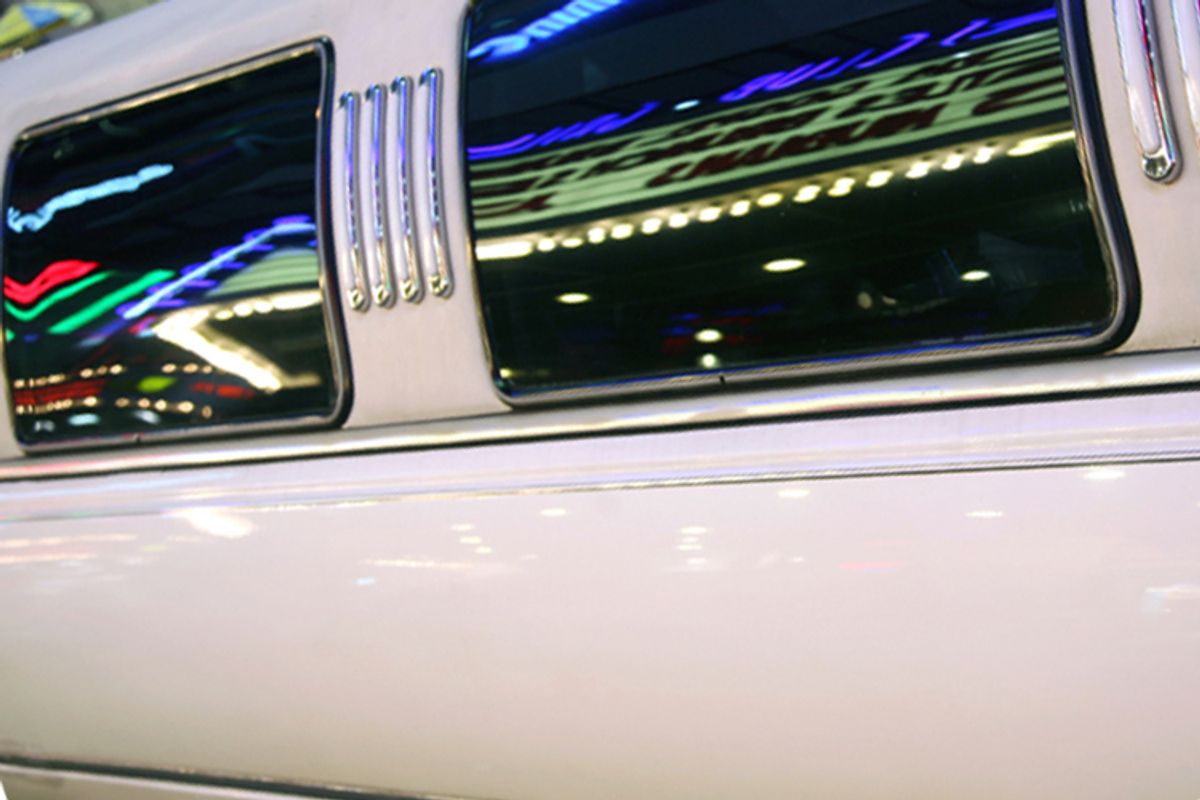 I was 26 years old, and it was the first time I had ever traveled for business. A mere two months into my first real job as a trade magazine writer, I was flying to Dallas to cover an annual conference of mechanical engineers. I had a shiny new American Express corporate card in my wallet, $100 in cash along with my plane ticket in an envelope in my purse, and a yellow legal pad and pen in my shoulder bag.  I was a journalist, and I was ready to take on the world.

We were just getting ready for takeoff when one last passenger came hurrying down the aisle. He was big and burly, with a greasy mop of black hair, a 5 o'clock shadow, and a blue teardrop tattooed on his cheekbone.

"Hi there," he said as he settled into the seat next to me. I slid further toward the man in the window seat who was aggressively ignoring us both. I tossed a cool smile over my shoulder at the newcomer -- Midwestern sign language for "leave me alone" -- then opened my book.

He was undeterred. As the flight attendants prepared the plane for takeoff, he loudly greeted the surrounding passengers, each of whom responded with confusion or alarm. Then, something strange happened. The pilot and copilot came down the aisle and stopped at our row.

A flight attendant offered the man a glass of champagne. "I'm so sorry we couldn't find you a seat in first class," she purred, touching his shoulder briefly before she stepped back.

"No problem," he said, clearly accustomed to such attention. "It's my own damn fault for being late."

I admit it: My curiosity was piqued.

"You want a drink?" he asked, nudging my shoulder.

"No, I'm good." I smiled as I slipped my book into the seat pocket in front of me.

And so began a budding friendship with Malo Santana, who I would soon learn was one of the many Santana brothers who make up the band Santana.

For three hours we talked and drank champagne, while the flight attendants fawned over us. He told me about his life on the road, and the tattoo, which he explained was in honor of a friend who'd been murdered.

When we landed, the pilots came back to our seats and invited Mr. Santana out for a drink at a nearby bar. He accepted, and asked me to come along. I was all in. I was beginning to suspect that I would love business travel.

As soon as we got off the plane, we were shuttled to a dive airport bar a few minutes from the terminal. Malo pulled out a wad of cash and bought drinks for the house. With my carry-on bag parked on one side of me and Malo Santana on the other, I laughed, and flirted, and drank cheap champagne till I was tipsy.

Once the pilots left, Malo begged me to come out and party a little longer. Finally, I agreed. How often does a girl get to party with a rock star? So we went to my hotel, where I checked in and left my bag with the concierge.

By the time I returned to the lobby, Malo had befriended a limo driver and a young woman who was sitting alone by the hotel fireplace looking blue. It turned out her ex-husband had taken off with her kids for the weekend and she was at a loss as to what to do with herself.

The four of us piled into the limo and took off in search of a club. On the way, we were lamenting our lack of good music, so we pulled into a late-night mall with a record store to buy a Santana tape. Three boys followed Malo out and asked for his autograph.

"Where is your name on the cover?" I asked, scanning the credits on the cassette cover as he signed their T-shirts and our driver popped the cassette into the tape player.

"It's bad luck to read the cover when you're listening to an album," he responded, grabbing the empty case and slipping it into his pocket.

A few minutes later we arrived at a crowded nightclub. Beautiful people stood in a long line waiting to get in. Malo ignored them. He walked us all straight up to the bouncer and introduced himself. We were escorted immediately inside. The manager was alerted to our presence and a table was emptied near the front of the stage for us to use.

People began whispering and pointing at us. Some came up and introduced themselves. I told them I was a journalist on the road with the band. Malo wrapped his arm tightly around me and smiled when I said this.

We ordered more champagne, and the manager asked Malo if he would please perform. After a few halfhearted rejections, he agreed.

We were all excited to see him onstage -- but I was getting dizzy from all the booze. In a moment of clarity I remembered that I was expected to cover the opening session at the conference in the morning and I wasn't about to screw that up.

He looked sad, but he understood. He escorted me out to the front of the club, kissed me on the mouth, and asked our limo driver to take me to my hotel.

I waved sloppily from the back seat of the car as I watched him head back into the club. I wondered if I'd ever see Malo Santana again.

When my alarm went off at 7:30 I was still a little drunk. Dazed and nauseous, I showered, drank some water and raced downstairs to the conference room, grabbing a banana and a cup of coffee from the complimentary buffet before I slipped into a seat at the back of the room. The keynote speaker had already begun, and I turned on my mini tape recorder.

I sat sipping my coffee, trying to stay awake and not vomit, while the speaker droned on about how to expand your business in the new millennium. As I sat listening, moments from the evening kept bubbling back up into my mind.

Sobriety had cleared the fog in my head, and now, details weren't adding up. Suspicion crept over me. Quietly, I reached down to the floor and picked up my purse. As the next speaker was introduced, I opened it and looked inside. My stomach lurched.

My credit card was gone. The envelope with $100 cash and my return ticket home were gone. And, inexplicably, my brand-new MAC lip gloss was also gone.

The whole night had been a con, and I had played along like a fool.

I broke out in a sweat, and my hands began to tremble. I was in Dallas, alone, with the change in my coin purse and no plane ticket home. Panic struck. I thought I might vomit right there on the table.

Instead, as calmly as I could, I asked the gentleman sitting next to me to please flip the tape on my recorder if it ran out, then I closed my purse, slipped out the back door and ran back to my room.

Sitting on the still half-made-up bed, I had no idea what to do next. I couldn't call my editor and explain that, while partying till dawn with a fake Santana brother, I had been robbed but was too drunk to notice. But if I didn't do something soon I wouldn't be able to get home, much less pay for my meals or hotel room.

Sifting through my suit coat hoping to find my credit card or some clue as to what happened to it, I came across the limo driver's card tucked in my pocket.

I called him, hoping this might still be a big misunderstanding and that all my worldly possessions were in the back of his car. I was wrong.

He told me he too had been conned. He had driven Malo around for hours with the promise of $500 at the end of the night, but Malo had disappeared before paying him.

I felt terrible. After all, I'm the one who brought Malo to the hotel, and I gave him credibility by simply hanging around with him. In a way, I was his accomplice.

I apologized profusely, then hung up and called the front desk to find out where the nearest American Express office was.

I headed over, where I explained in the briefest possible detail, that I had had a drink the night before with a man I met on the plane, and that I believe he stolen my money, card and plane ticket.

They felt terrible for me, poor little Midwestern girl taken in by some evil scammer. They told me they'd contact the police. Then they promptly issued me a new card and secured me a new plane ticket. They couldn't do anything about the cash, they said, but at that point I didn't care. I was just happy to be able to cover my hotel bill.

That evening I got a call from American Express. The police had captured Malo that afternoon.

After tipping the waitress at the nightclub $100 on my AmEx card and taking 10 people to dinner at an all-night diner -- also on my AmEx card -- he checked himself into a local hospital. Apparently, Malo was suffering from phlebitis, a blood-clotting disease. He'd had a breakdown after the meal, and took a cab to the nearest  hospital where he secured himself a private room with -- you guessed it -- my AmEx card. The police arrested him there. He'd spent $3,000 on my card in total.

By the way, in case it's not clear: There is no "Malo Santana." There are only three Santana brothers, and one of them, Jorge, had a band called Malo, which had a hit with the song "Suavecito." The word "malo" is Spanish for "bad." In addition to being naive, I was guilty of being unfamiliar with '70s Latin rock. No one could ever pull over this kind of con in the age of Wikipedia.

When I returned to the office three days later, I told my editor that I'd been pickpocketed in the airport.

"Oh, you poor thing," she said, bringing me a cup of coffee. "How scary for you."

She patted my shoulder, her eyes warmed with motherly concern. She never learned the true story of what really happened that night, which I guess means I conned her a bit, too.

To hear Sarah Fister Gale tell this tale on NPR's "The Story,"