Will WikiLeaks lead to licensing of journalists?

By defending the organization as media, which we should, we may invite some unwanted consequences 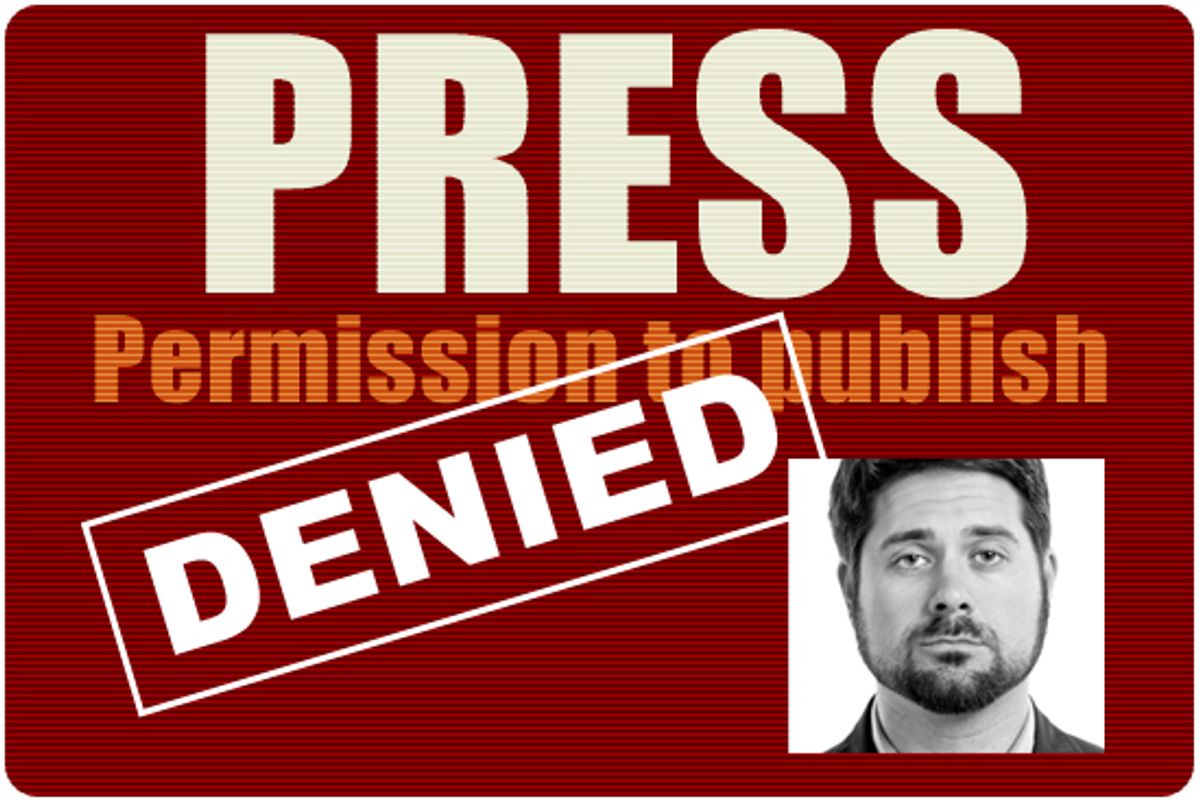 Twitter may be the worst medium around for nuance, but a series of 140-character messages can at least clarify a disagreement. A couple of conversations there last night brought home some fundamental issues in the WikiLeaks affair, at least as it affects the future of journalism and free speech.

One conversation was with a journalist friend, Jason Pontin, editor of the MIT Technology Review. Like many people, he's not thrilled with all of what Julian Assange and his WikiLeaks team are doing. But when he boiled down a key issue to this -- "Is @wikileaks a media entity, and is Assange a journalist?" -- he hit the heart of a debate that is going to rage in coming weeks and months.

If I'm right, and I pray I'm not, the debate will lead to a drastic weakening of the American people's already eroded right to know what their government is doing in their name and with their money. It will also lead to federal licensing of journalists in America, which would be an absolute disaster for the craft.

The debate will arise if, as seems increasingly likely, the Obama administration charges, extradites and tries Assange for espionage, using an old law, the Espionage Act of 1917, in new and, if successful, hugely destructive ways. This notion has already been aired twice, among other places, on the editorial pages of the Wall Street Journal, where executive power is deemed essentially limitless when it comes to anything relating to national security or crime (except most corporate wrongdoing, of course).

In today's edition, for example, an Op-Ed piece by Gabriel Schoenfeld insists that Assange could easily be charged under the law. He acknowledges that newspapers have published secrets on many occasions, but they lacked the "criminal 'bad faith'" needed to be convicted. He also implies that the New York Times should have been charged in the Pentagon Papers case. He concludes:

WikiLeaks is something else. It is not informing our democracy but waging war on its ability to conduct diplomacy and defend itself. If Mr. Assange were tried before a jury and sent to jail, our security would be enhanced and our cherished freedoms not abridged one whit.

WikiLeaks is something else, but not the way Schoenfeld thinks. It is very much "informing our democracy" -- among other things, exposing some egregious lies our government seems to have told. If he wants to mind-read Assange and company to assume they want to ruin diplomacy and our national defense, let me mind-read and suggest that the documents, on balance, have shone a valuable light into some ugly corners that needed illumination. That is what journalists do, isn't it, when they do their jobs?

When Pontin posed his question, I answered, reprising an earlier posting here this week, "Yes, WikiLeaks is a media org. Defend them and you're defending yourself. No one's asking you to like them." (I've made tiny edits in quoted tweets here, to fix misspellings, grammar and punctuation.)

Jason said he understood why new-media advocates might say that. He also saw logic in a traditional-media argument that WikiLeaks "lacks most of the defining characteristics of journalism." He went on to say that WikiLeaks "doesn't report or create; doesn't synthesize and analyze; has an agenda other than truth-telling; etc."

Another Twitter user chimed in with similar thoughts. He's a military public affairs person (who emphasizes that he speaks for himself on Twitter and is in no way acting there as a spokesman for the military). He wrote, sarcastically, "Sure @wikileaks is a media company with all those articles and bylines ... oh, wait ... oops." I asked if only media companies deserve the First Amendment. Not the point, came the reply: "My premise is we get terms right and stop categorizing them as 'media.'" And this follow-up: "They don't create. They redistribute."

The idea that journalism can exist only with the act of synthesis and analysis, and with no agenda but truth-telling, doesn't stand up to reality. If it did, much of what appears in the major media today would fail that test, certainly on the "synthesis and analysis" element; when reporters serve as stenographers, uncritically writing down what the rich and powerful say and neglecting to tell their audiences when the rich and powerful are lying, the only synthesis involved is deciding which quotes to include.

WikiLeaks, far from indiscriminate dumping of what it has unearthed, has demonstrated increasing sensitivity to the impact of the information. The New York Times showed the government what it wanted to report, and took government "advice" on what to exclude. WikiLeaks tried to get the State Department's help in vetting sensitive documents but was rebuffed. It tried to be responsible in what could be called a journalistic way -- much more so than its critics are claiming -- but our government refused. Was this because the government wanted what it might consider clean-ish hands when it charged this particular media organization with spying?

Even engaging in this debate worries me, because to do so suggests that the people we call journalists have more advanced free-speech rights than the rest of us. I vehemently disagree with that notion. I do believe, however, that acts of journalism are worthy of certain special protections in certain special circumstances.

This is why so-called shield laws -- giving protection to whistle-blowers by giving journalists some immunity from orders to disclose them in most cases -- can be pernicious. When they attempt to define who the journalists are, as opposed to what qualifies as journalism, they inevitably lead toward this: The government, or its agent, decides who qualifies as a bona fide journalist.

This is where the WikiLeaks conversation could take us, too. By appropriately defending it as a media organization, as we anticipate prosecution to follow government's current persecution, we invite the question of what kind of leak-driven website wouldn't be. Again, we end up with government licensing. We don't want to go there.