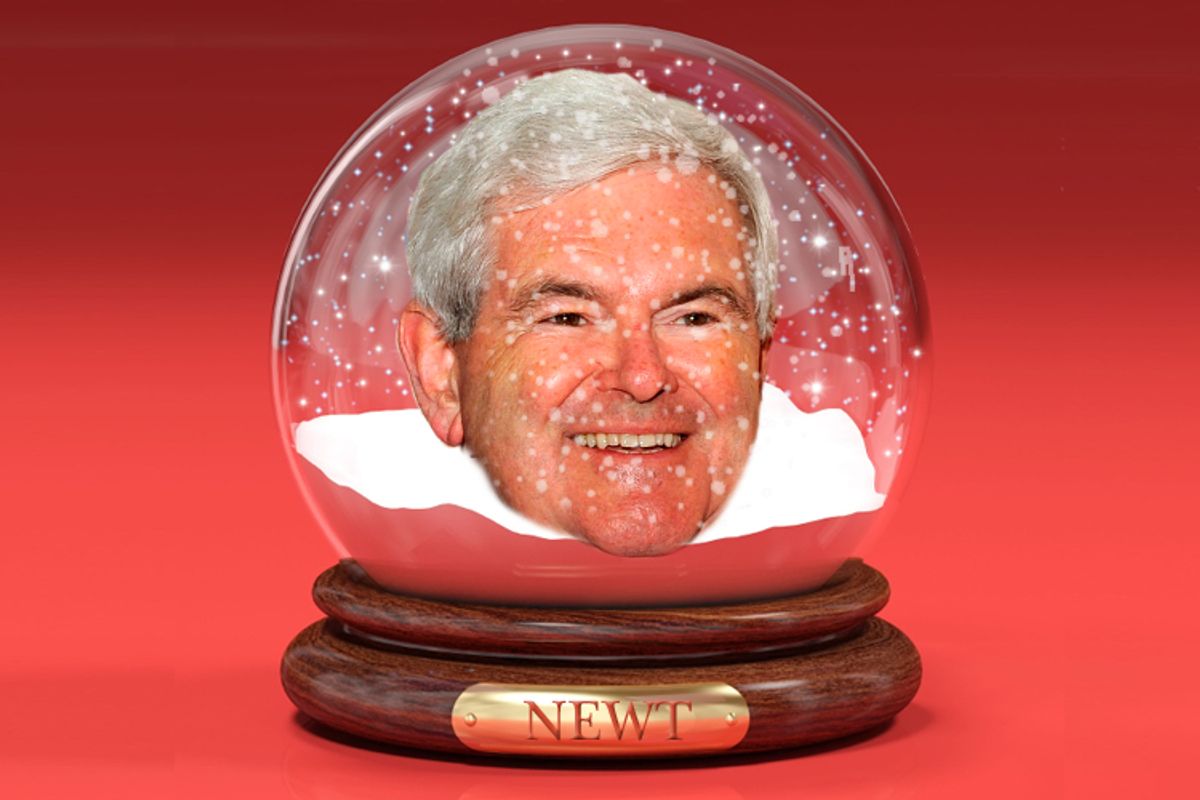 There increasingly seems to be a correlation between the intensity with which Newt Gingrich says he is mulling a presidential bid and the urgency with which he hawks his books and CDs to the conservative masses.

The former House speaker and perennial almost-presidential-candidate recently said on Fox News that he is "much more inclined to run than not run" in 2012. Meanwhile, in the past few weeks, Gingrich has been furiously trying to sell his historical novels and self-help books.

First, Salon caught Gingrich using Veterans' Day to hawk his "fair-to-middling fictional adaptation" of Valley Forge. Then, he was called out by Wonkette for taking the opportunity of the anniversary of Pearl Harbor to sell two of his other novelizations, "Days of Infamy" and "Pearl Harbor." He later deleted without explanation a tweet that read, "The 69th anniversary of the japanese attack is a good time to remind folks of our novels pearl harbor and days of infamy."

In the past few days, Gingrich has been using his Twitter account to promote what he calls "Gingrich Productions 12 Days of Xmas Presents." For example:

"To Try Men's Souls" is (one of) Gingrich's novelizations of the Revolutionary War.

All of this rank merchandising would look untoward for someone who was truly about to declare a candidacy for higher office (just ask J.D. Hayworth). In fact, Gingrich's actions over the past year or so -- relentlessly fanning the presidential speculation while relentlessly selling stuff -- do fit a narrative, but it's not one about a guy who's going to run for president.

Here's what Gingrich's ex-wife Marianne thinks, as she told Esquire over the summer:

He wants to run for president.

She gives a jaundiced look. "There's no way," she says. She thinks he made a choice long ago between doing the right thing and getting rich, and when you make those choices, you foreclose other ones. "He could have been president. But when you try and change your history too much, and try and recolor it because you don't like the way it was or you want it to be different to prove something new ... you lose touch with who you really are. You lose your way."

That, for my money, is the most coherent explanation to date of the Gingrich phenomenon.