The president got Republicans to budge, and avoided a bruising, futile confrontation over taxes 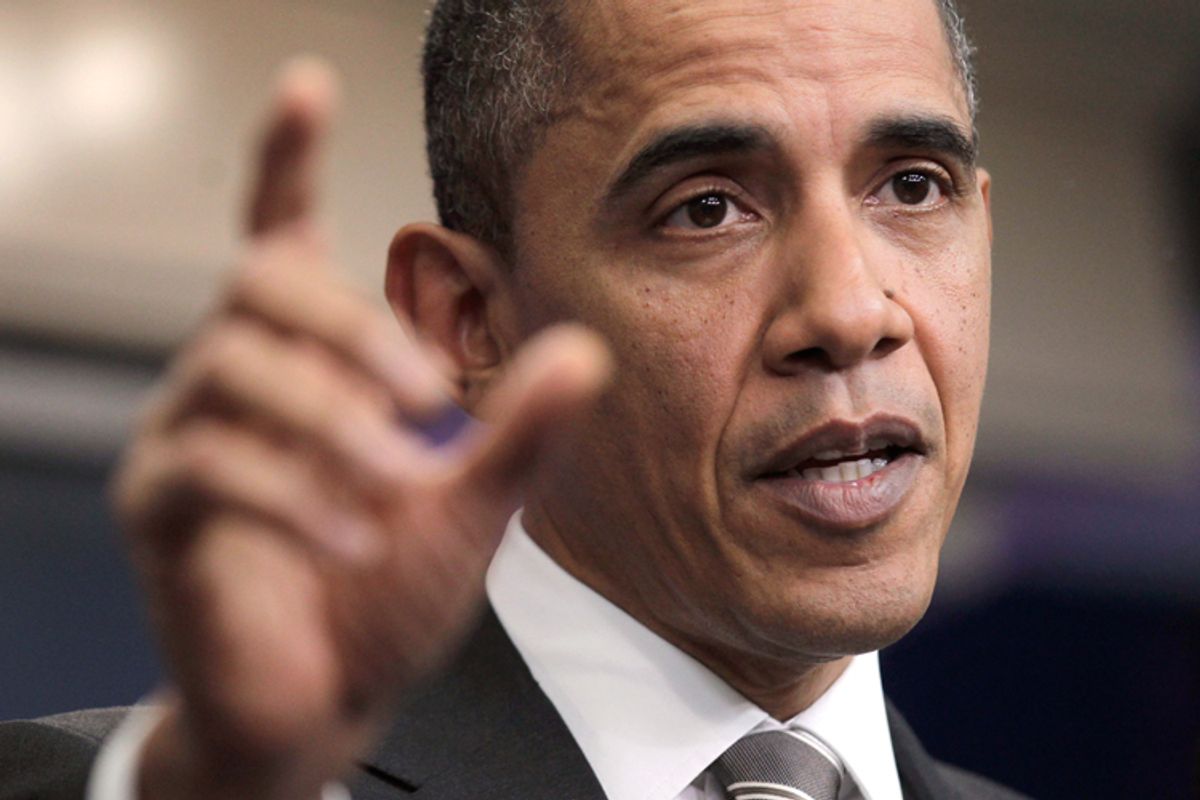 If anybody wanted to erect a statue of President Obama after his first two years, the unofficial White House motto should be engraved on the base: "Thank you, Sir. May I have another?"

To liberal Democrats, Obama's putative bargain with Republican leaders extending the Bush millionaires' tax cuts for two years amounted to craven surrender. Is there nothing this president will fight for? Has his vision of himself as a transformative figure, his sheer narcissism, made him confuse the rough-and-tumble of Washington with the genteel precincts of the Harvard Law Review?

Or did he simply get rolled? Blackmailed? Bullied into submission by ruthless adversaries who see his conciliatory efforts as a sign of weakness? The left-leaning Huffington Post headline read: "Obama Caves, the Rich Save."

Even before the deal's outlines were announced, Huffington's Howard Fineman reported that "GOP aides privately could barely contain their contempt -- and their amusement -- at the president's declaration of a dawn of bipartisan optimism."

Never mind that Fineman's an unfailing exponent of clubby conventional wisdom who once opined that George W. Bush's exquisite fashion sense made him fit to be a king. ("He's a boomer product of the '60s," Fineman marveled, "but doesn't mind ermine robes.")

Many, if not most, liberal Democrats agreed with him. "Let's stop pretending. Barack Obama is a disaster as a crisis president," wrote the American Prospect's Robert Kuttner. "He has taken an economic collapse that was the result of Republican ideology and Republican policies, and made it the Democrats' fault. And the more that he is pummeled, the more he bends over."

Paul Krugman foresaw humiliating defeat. Does the White House, he asked "really believe, after all this time, that gestures of appeasement to the GOP will elicit a good-faith response? Obama almost seems as if he's trying, systematically, to disappoint his once-fervent supporters."

On comment lines, extravagant bitterness was common. "He's been a member of their club all along and is just playing his leading role in D.C. Power Theater," one New York woman wrote. "He's not some genius strategizing in a multi-dimensional chess game the rest of us don't understand. He's not a sell-out to his base. To merit that dishonorable distinction, he would have had to have some principles to begin with. It appears he never had any."

Maybe it's because I'm lucky enough to have a decent job, and maybe because I never envisioned Obama as a political messiah to begin with, but an awful lot of this commentary strikes me as overwrought. Or maybe it's because I'm a sports fan and tend to see politics more as a game than a theatrical melodrama on themes of good versus evil.

In that sense, we're not talking about the ninth inning of a World Series Game 7 here. It's more like, say, the fourth inning of Game 5, with the series knotted at two games apiece. The White House has given up a few runs, but there's no reason to panic.

Mindful that there's no such thing as a six-run home run, the way to look at the situation is this: Faced with a 1-2 count, the president has succeeded in working a base on balls. The game's far from over, and he's in a slightly better position. End of sports metaphor.

After the fact, Krugman's scorn was less categorical. "Obama extracted some concessions," he wrote, "with the big surprise being a payroll tax cut." In effect, as New York Times economics blogger David Leonhardt argued, the critical extension of unemployment benefits for 13 months, along with the continuation of middle-class tax benefits from Obama's original stimulus package, and the payroll tax cut amount to a deficit-financed second $300 billion stimulus. Not enough, perhaps, but a lot better than nothing.

"Overall, enough sweetener," Krugman concludes, "to diminish, but not eliminate, the bitterness of the disappointment."

OK, but what about the politics of the thing? Because if the White House gave up something that, realistically speaking, it had already lost in the November elections, GOP leaders made big concessions, too. By bargaining with President Obama, they made it harder to portray him as a Socialist Demiurge out to destroy capitalism. They conceded him a legitimacy the professional right has denied him for two years.

The Party of No was forced to say yes. From a Tea Party perspective, GOP leaders agreed to increase the budget deficit purely for the sake of multimillionaire tax cuts. How much clearer can things get?

For Obama, justifiably accused of negotiating with himself in a futile quest for bipartisanship during the stimulus and healthcare efforts, this time was different. This time, he got Republicans to budge off square one. Plus, he avoided a bruising and futile confrontation over the accursed Bush tax cuts that could have paralyzed Washington for months.

At minimum, the White House bought itself some precious time.