The U.S. was shipping arms to Saudi Arabia for use in northern Yemen even as it denied any role in the conflict 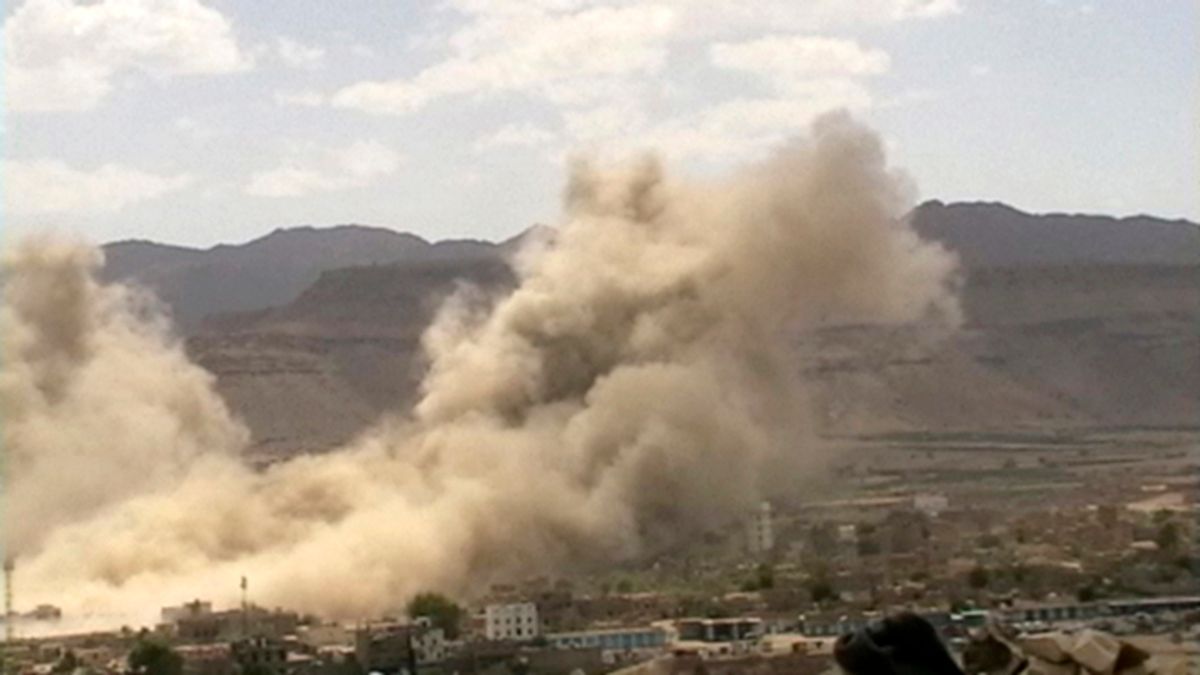 Smoke rises after an air strike on rebel targets in the northwestern Yemeni province of Saada in this image taken on August 26, 2009 and released by the Houthi rebel group August 29, 2009. Yemen's president vowed late on Wednesday to rid provinces in the north of the country of rebels in a matter of weeks, ending recent heavy fighting which has seen hundreds killed and thousands displaced. Ali Abdullah Saleh said reinforcements would be sent to the mountainous Saada province, a rebel stronghold, adding he was confident government forces would defeat the rebels in Saada and Haraf Sufyan. REUTERS/Houthi Group/Handout (YEMEN POLITICS CONFLICT) QUALITY FROM SOURCE. FOR EDITORIAL USE ONLY. NOT FOR SALE FOR MARKETING OR ADVERTISING CAMPAIGNS (Â© Ho New / Reuters)
--

(UPDATED) The Obama administration supplied emergency arms shipments to Saudi Arabia to aid the Saudis' attacks on a Northern Yemeni rebel group late last year, according to a cable released by WikiLeaks -- a revelation that is directly at odds with a public statement at the time by the top State Department spokesman, who flatly insisted that the U.S. had no military role in the conflict.

The December 2009 cable, released this week and flagged by Spencer Ackerman, describes fighting between the governments of Yemen and Saudi Arabia and the Houthi rebel group in northern Yemen, along the Saudi border. The Houthis are a Shia group who have been fighting with the central Yemeni government for years, with devastating effects for the civilian population. Beginning in October 2009, Saudi Arabia became engaged in several months' fighting against the Houthis on both sides of the border.

The Dec. 30 State Department cable from Riyadh described the Saudi assault as the use of "massively disproportionate force in [the Saudis'] effort to repel and clear the lightly armed Houthi guerillas from the border area." The cable then describes the secret American role in the conflict over the previous two months (emphasis ours):

During the campaign, the Saudi military turned to the U.S. for emergency provision of munitions, imagery and intelligence to assist them to operate with greater precision. The U.S. military responded with alacrity to the extent possible, primarily by flying in stocks of ammunition for small weapons and artillery. However, the great majority of Saudi requests remain bogged down in the FMS contacting process or in interagency reviews.

Now, what was the State Department saying publicly at the time about the Houthi conflict? Here is a Dec. 15 exchange on the topic between a reporter and Assistant Secretary of State for Public Affairs Philip J. Crowley:

QUESTION: On the conflict in Yemen, Houthis say that U.S. warplanes have launched airstrikes in northern Yemen. Is the U.S. involved in any military operations in Yemen?

MR. CROWLEY: But we – those kinds of reports keep cropping up. We do not have a military role in this conflict.

Most reasonable people would take emergency shipments of arms from the United States to the Saudis specifically for use in this conflict as constituting "a military role." We've asked Crowley for comment and we will update this post if we hear back. (We took issue with the same statement yesterday because the U.S. launched cruise missile strikes at suspected terrorists in southern Yemen a couple days after Crowley's blanket denial of any military operations in the country.)

QUESTION: Okay. Do you believe that Iran is supporting Houthi rebels in Yemen making border incursions into Saudi Arabia? And has the U.S. been asked for assistance by the Saudis to deal with these incursions?

MR. CROWLEY: I mean, obviously, this is something that we want to see resolved as quickly as possible. We remain concerned about the loss of life that’s occurring on both sides. We continue to provide advice, training, and equipment to both Saudi Arabia and Yemen as part of our ongoing security cooperation. We have no direct role in what’s happening along the border. As to what is driving this, it’s hard for us to know, but we clearly will continue to work with both countries and try to have this come to a successful conclusion as quickly as possible.

And a few months earlier, State Department spokesman Ian Kelly told reporters that the U.S. wanted a cease-fire in the conflict between the Houthis and Yemeni. From a Sept. 22, 2009 press conference:

QUESTION: What’s the latest on the conflict in Yemen? How much is the U.S. concern – have concern about what’s going – continuous conflict?

MR. KELLY: Right. Well, we’re deeply concerned about the ongoing conflict between the Yemeni Government and the al-Houthi opposition groups in northern Yemen. We call on both parties to declare an immediate ceasefire, to ensure the security and access of humanitarian aid workers in the region. And we call on all states in the region to facilitate the safe passage of emergency relief supplies to those in need.

Very soon after Kelly's cease-fire statement, the Saudis got involved in the fighting, and the United States promptly supplied them with arms to continue the conflict.

WikiLeaks critics like former State Department official Jamie Rubin have flatly dismissed "the idea that the United States was conducting some secret policy different than the one it was putting forward publicly." But the Houthi episode seems to be a significant example of exactly that.

12/11/10 UPDATE: Crowley responds in an email to Salon: "[R]ecall the context for the original question. The Houthis accused us of bombing them. As I responded, we do not have a military role in this conflict. And we have no direct role in what is happening at the border. Those statements are true."