The triangulation Obama is guilty of 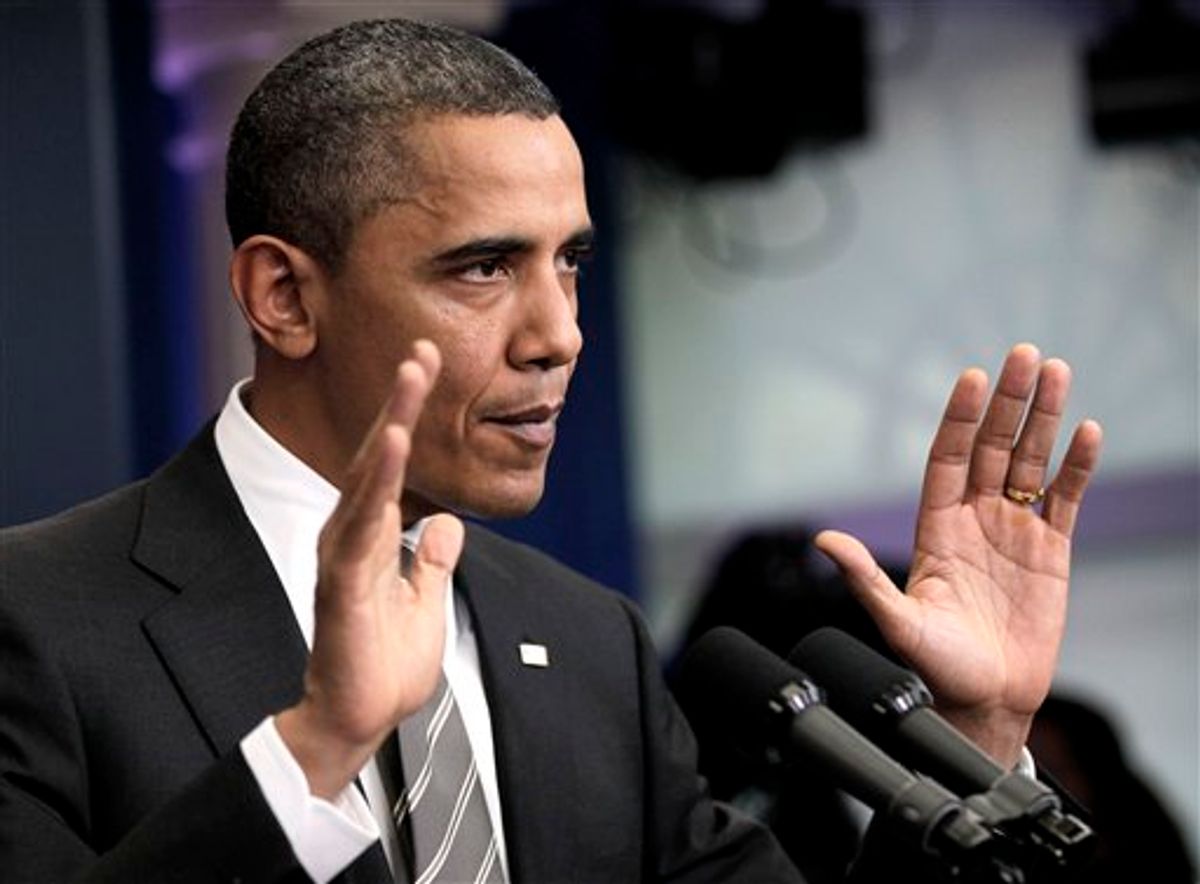 There are two ways of understanding "triangulation," the political tactic that Barack Obama now stands accused by some of embracing.

The term is most famously associated with Bill Clinton, who (at least according to popular political history) relied on it to recover from his 1994 midterm drubbing and win reelection in 1996. As Politico notes today, Obama's actions this week -- cutting a deal with Republicans that will extend the Bush tax cuts for the wealthiest Americans and using a press conference to call out "purist" liberals who objected to it, resulting in praise from "centrist" commentators like David Broder and David Brooks  -- have raised questions about whether he's now pursuing a similar strategy.

The answer depends on how you understand the term.

To some, triangulation is all about political theater -- intentionally provoking your own party's base into criticizing you, then wearing their outrage as a badge of honor, proof to the centrist masses that you aren't a prisoner of your party's ideological extremists. I don't believe this is what Obama is doing. As Greg Sargent noted earlier this week, Obama has consistently made it clear -- and made it clear again at his most recent press conference -- that he shares liberals' desire to do away with the Bush era tax rates for the most wealthy Americans. He just believes that doing so is not possible at this moment -- and that he has, instead, brokered the best deal that is possible. This is not how a theatrical triangulator would have handled things. In this sense, his press conference "lecture" to liberals is probably best understood as an expression of frustration -- Why can't you see that I'm doing the best I can to advance our cause? -- and not a calculated effort to sell them out for political gain.

Triangulation can also be defined, as Jonathan Bernstein writes today, as legislative pragmatism -- something that existed long before Clinton was president. This definition better fits Obama's current strategy. There are 58 Democratic senators right now (a number that will shrink in a few weeks), and with Republicans ready to unite (with a few conservative Democrats) in a filibuster of anything short of a full extension of the Bush-era rates, compromise was necessary to pass anything before Jan. 1 -- when the rates were due to expire for everyone. So Obama made a deal to break the GOP filibuster and, of course, that deal infuriated liberals.

The kind of triangulation that Obama exhibited this week is far more likely to benefit him politically in the long term. The deal that he cut includes a significant amount of economic stimulus -- more than anyone thought Obama would ever get Republicans in Congress to agree to, especially after the November midterms. By itself, it won't repair the economy, but it should stir growth and reduce the unemployment rate. If it does, there'll be a big political payoff for Obama, since the independent voters who have abandoned him tend to judge presidents (whether they admit it or not) on the economy. When the economy is struggling and they're feeling uneasy, they blame the president -- although they may tell pollsters that their real disappointment involves some other issue, like the deficit. But if the economy improves, all is quickly forgiven -- the president's poll numbers rise, and all those other issues that were bothering independent voters pretty much disappear. This is why Obama's deal with the GOP makes sense: It gives him his best shot at demonstrating real economic improvement in the next two years.

Relying on theatrical triangulation -- making a show of provoking liberals -- wouldn't hold this same promise for Obama. Sure, he'd get plenty of favorable ink from Brooks, Broder, et al., but if it didn't produce measurable economic improvement, those same independent voters would still vote against him in 2012.

To the extent Obama is triangulating, then, it represents a strategy to extract from Congress the most meaningful, substantive economic concessions possible. Politically, that makes a lot of sense.