The senator brings government to a glorious halt with an extraordinary diatribe against U.S. economic policy 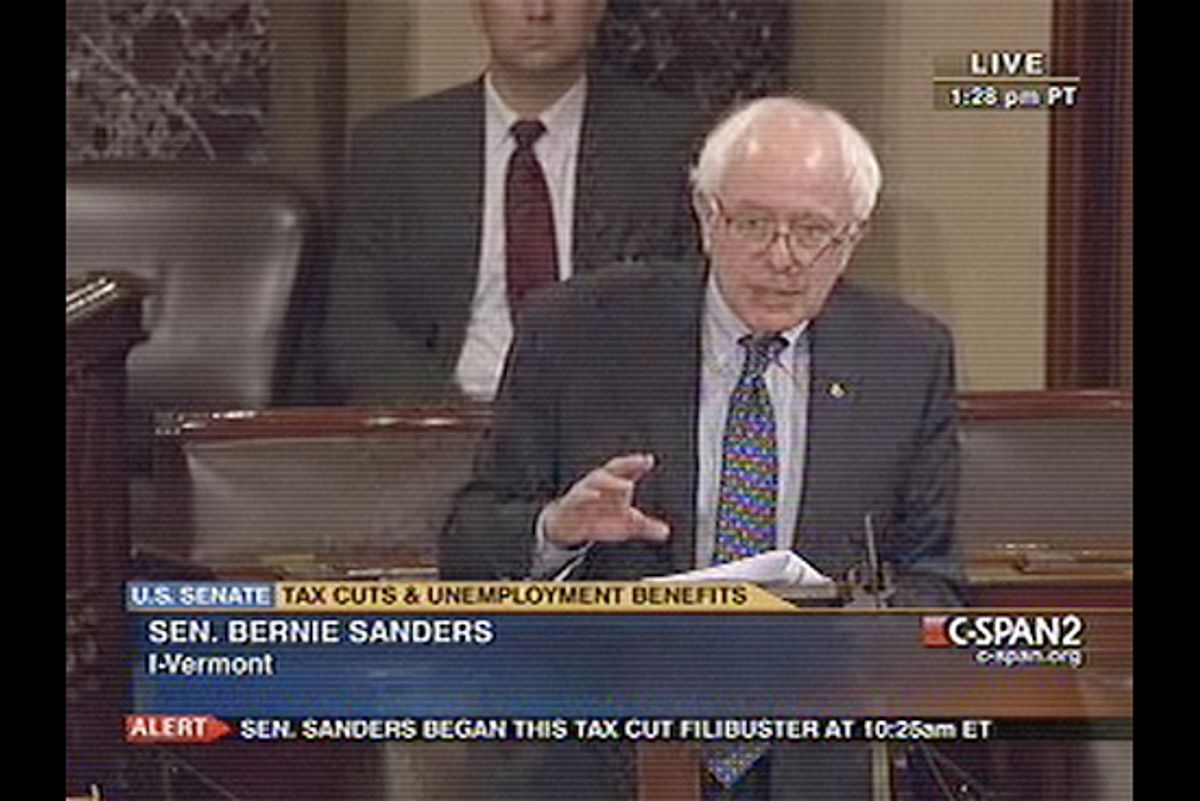 On CSPAN, six hours after first taking the podium to filibuster against the tax cut deal at around 10:25 Friday morning, Sen. Bernie Sanders, I-Vt.,  is still talking. The CSPAN subtitle is "U.S. Senate: Tax Cuts & Unemployment Benefits," but for the last few minutes he has been blasting trade polices that disadvantage American workers.

But that's fine. His epic rant -- perhaps one of the most extraordinary critiques of how the American economy has been managed over the last several decades delivered in living memory -- is an endless sequence of connecting the dots from one outrage to another. Even as I wrote this paragraph, he segued effortlessly from trade policy to Wall Street.

"But it is not just a disastrous trade policy that has brought us where we are today. The immediate cause of this crisis, and it gets me just sick talking about it ... is what the crooks on Wall Street have done to the American people."

Sanders then delivers a capsule history of deregulation, blasts Alan Greenspan, notes that in the late '90s he had predicted everything that ultimately happened, but failed to rally legislative support to stop the runaway train -- "and the rest is, unfortunately, history."

From there, a class warfare sideswipe: "Understand, that in this country when you are a CEO on Wall Street -- you can do pretty much anything you want and get away it."

"And what they did to the American people is so horrible."

On to the bailout! His scorn is so caustic it could disintegrate an aircraft carrier: "We bailed these guys out because they were too big to fail, and now three of the four largest banks  are now even larger. "

As Sanders' great oration enters its seventh hour, it is, by its very nature, impossible to summarize. It is a ramble, a rant, a critique, a cry of rage, a wail of despair, and a call to action. And it is amazing. I've heard stories of filibusters in which senators read phone books. And I've watched with disgust as for years Republicans have merely threatened to filibuster, without ever actually being forced to exercise their vocal cords. But here is Bernie Sanders, seven hours in, calling for the biggest banks to be broken up, voice still hale and hearty, and looking like he could easily go another seven hours.

Give credit to the citizens of Vermont, who know how to elect someone not afraid of speaking truth to power.

NOTE: An earlier version of this post incorrectly interpreted Sanders' repeated references to "Mr. President" as being made to President Obama, instead of the President Pro Tem of the Senate.