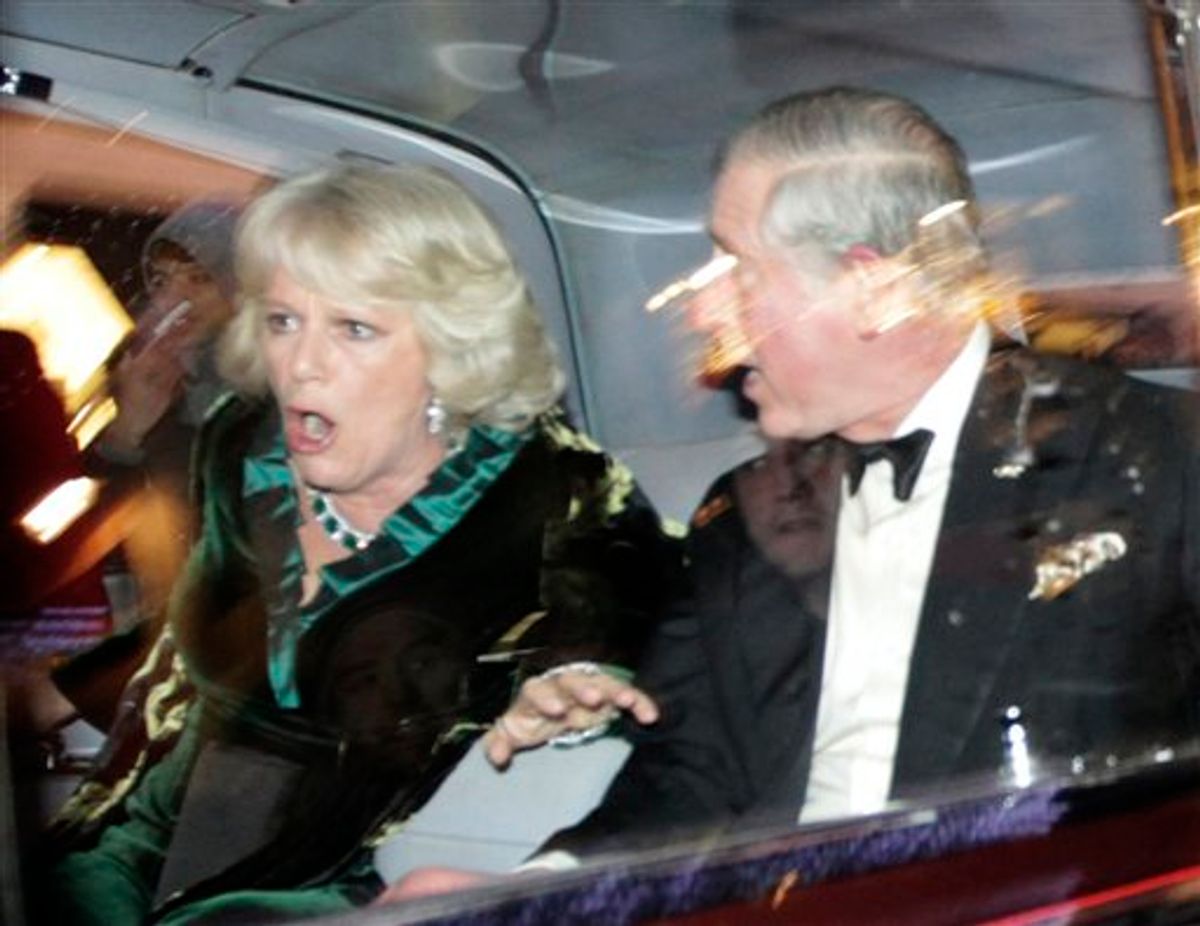 Britain's Prince Charles and Camilla, Duchess of Cornwall, react as their car is attacked by angry protesters in London, Thursday, Dec. 9, 2010. An Associated Press photographer saw demonstrators kick the car in Regent Street, in the heart of London's shopping district. The car then sped off. Charles' office, Clarence House, confirmed that "their royal highnesses' car was attacked by protesters on the way to their engagement at the London Palladium this evening, but their royal highnesses are unharmed." (AP Photo/Matt Dunham) (AP)
--

The chief of the Metropolitan Police pledged to launch a full and detailed investigation into the incident, in which protesters set upon the heir to the throne's Rolls Royce as it drove through London's busy West End Thursday night to go to a charity event.

Students had poured into central London to protest sharp rises in university tuition fees as lawmakers debated and passed the bill in Parliament. Most of the students were herded by police with riot shields into contained areas, but many groups broke free and rampaged through some of the city's most famous shopping areas.

A group of up to 20 protesters, some chanting "Off with their heads!" smashed one of the royal couple's rear car windows and splashed white paint on the vehicle. Charles and Camilla were visibly shaken, but unharmed.

The security breach is particularly embarrassing for police and the Royal household in the run-up to Prince William's wedding on April 29, raising questions over whether or not security protocols need to be reviewed.

Prime Minister David Cameron said police must learn from the lapse in security but not be blamed for it, insisting that protesters should feel "the full force of the law."

"Let's be very clear about where responsibility lies," Cameron, speaking in Downing Street. "Responsibility for smashing property, or violence, lies with the people who perpetrate that violence and I want to see them arrested and punished in the correct way."

The premier also shrugged off claims that violence was limited to a small minority of protesters, saying "there were quite a number of people who clearly were there wanting to pursue violence and destroy property."

Metropolitan Police Chief Paul Stephenson commended officers for their bravery and said the nearly 3,000-strong contingent of officers out to deal with Thursday's protests showed commendable restraint in dealing with the "dreadful" actions of "thugs."

Buckingham Palace said it does not comment on security procedures.